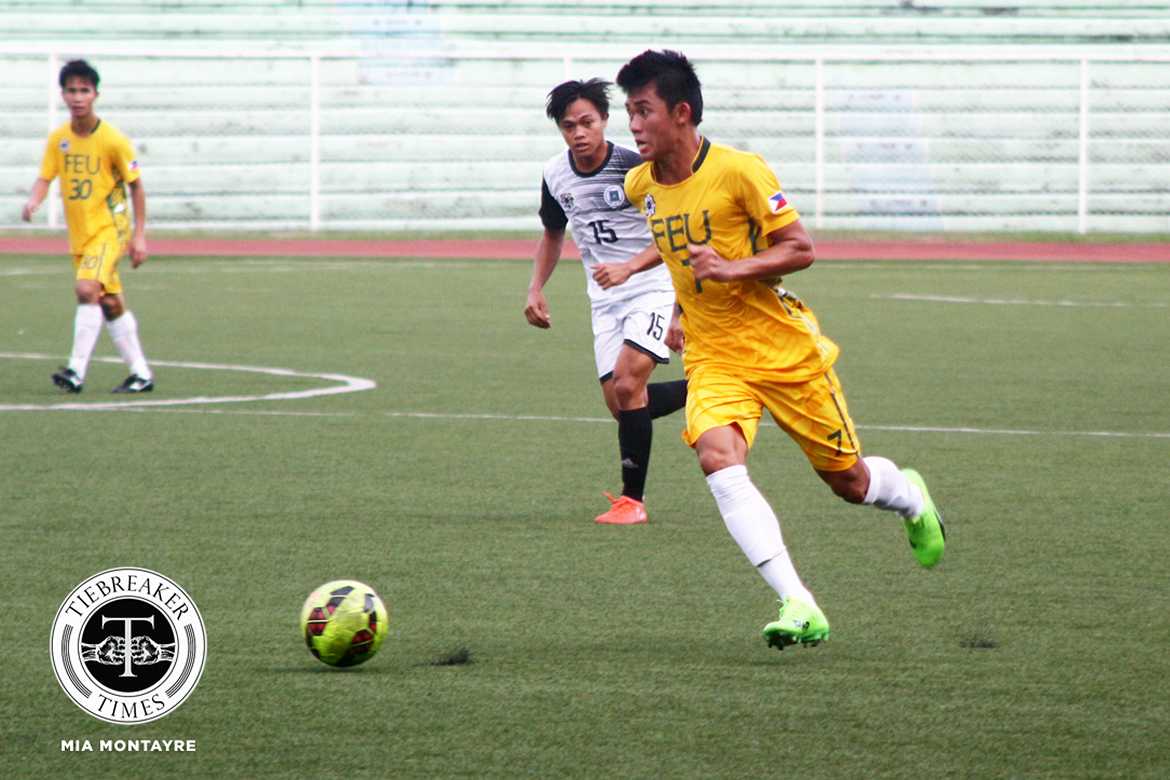 With both games ending in a draw yesterday, University of Santo Tomas and Far Eastern University knew that taking all three points will come in handy as both teams took the field to open their UAAP Season 79 campaigns. In the end, it was coach Vince Santos’ FEU Tamaraws who grabbed all three points as they blitzed to a 2-0 win against UST Golden Booters Sunday afternoon at the Rizal Memorial Stadium.

Quite unsurprisingly, the Tamaraws dictated the passage of play in the early stages of the match. They had most of the ball yet it was mostly in the middle of the park as the Tigers did well to fend off their opponents.

Given the circumstances, UST needed to play on on the break by pressing the Tamaraws in order for them to threaten FEU, which they did. Fifteen minutes into the encounter, Conrado Dimacali III dispossessed Michael Menzi just right at the edge of the box. The rookie forward then just had Arjay Joyel to beat but unfortunately for him, the veteran FEU defender who occasionally plays as a goalkeeper managed to win the ball back almost instantly. Dimacali had a shout for a penalty, but the referee had none of it.

Three minutes later, another FEU lapse in defense nearly led to a gift of a goal for UST. This time it was Audie Menzi, Michael’s brother, who presented the chance to Dimacali after his haphazardly headed clearance landed in front of the UST front man. Perhaps unprepared for the occasion, Dimacali lacked the composure needed to punish FEU’s defense as his shot only hit the side netting.

#ReadMore  Aroga clears issue with UP fan: 'He wasn't provoking me'

UST turned the game around in effect as their pressure on FEU started to pay off. In the 31st minute, they had a golden chance to grab the breakthrough goal courtesy of AJ Pasion. The forward was teed off nicely by a Renz Gumban cross but his header went wide to the left.

Still having more of the ball, the Tamaraws looked to have woken up from a lull a minute after Pasion’s attempt. Sophomore Rico Andes broke free from the Tigers’ defense but the lanky Tamaraw forward was unable to test Zaldy Abraham who comfortably gathered the tame effort.

Abraham faced another mild shot a minute later, but this time around, he made a costly mistake that gave their opponents the upper hand. It was Val Jurao’s free kick that headed straight to the UST goalkeeper and slipped through to make it 1-0 for FEU.

The Tamaraws went on to capitalize on a perturbed UST side when a quick counter attack ended with another goal for FEU. Chy Villaseñor set up Andes who had a clinical touch to a tap in from five yards. All of a sudden, a gritty UST side fell two goals down to their more clinical foes with 10 minutes left before the first half. Thankfully for the Tigers, the first half barrage ended at two as another Andes run from the left wing was unsuccessful in breaching Abraham for the third time.

The Tomasinos could have narrowed the gap before the break when Pasion got on the end of Dimacali’s pass from the right side. Like his first shot, Pasion had another missed opportunity as he didn’t get to make a proper contact to the ball. Halftime soon came with FEU holding a handy two-goal advantage.

After the interval, Pasion tried to made amends right away but his attempt was blocked and cleared away from danger in the 47th minute. Facing a two-goal deficit, they continued the pressing game which sometimes served as a double edged sword as it allowed FEU to surge on the break. Nicolas Ferrer just nodded Villaseñor’s shot wide while Andes was denied by Abrham’s urgent keeping at the hour mark.Another FEU break came in the 68th minute when Joyel set Ferrer on the loose but the forward skied his shot off target.

Towards the end, the Tigers were poised to pull one back and were close to doing so when Dionisio Busmion forced a diving save from Joyel, who made sure that his team will end the match on a high note with a clean sheet.

“I think we did reasonably well considering we had them for one month. Obviously we changed the system of play from last year. We’re hoping that in the next few games the boys will understand [the system]. Of course the result today, we’re happy about,” Santos told of his team after the match. He also added that the team did well to catch UST on the counter given that the Tigers were pressing them for much of the game, allowing space for them to operate in the flanks.

With the win, the Tamaraws are currently on top of the standings with three points on board. They are looking forward to add three more when they square off against Adamson on Saturday, February 11 at 4pm. UST, meanwhile, have a clash against Ateneo to prepare for as they try to avoid losing pace early on in the Final Four race. The said game will be on Sunday, February 12, at 6pm.