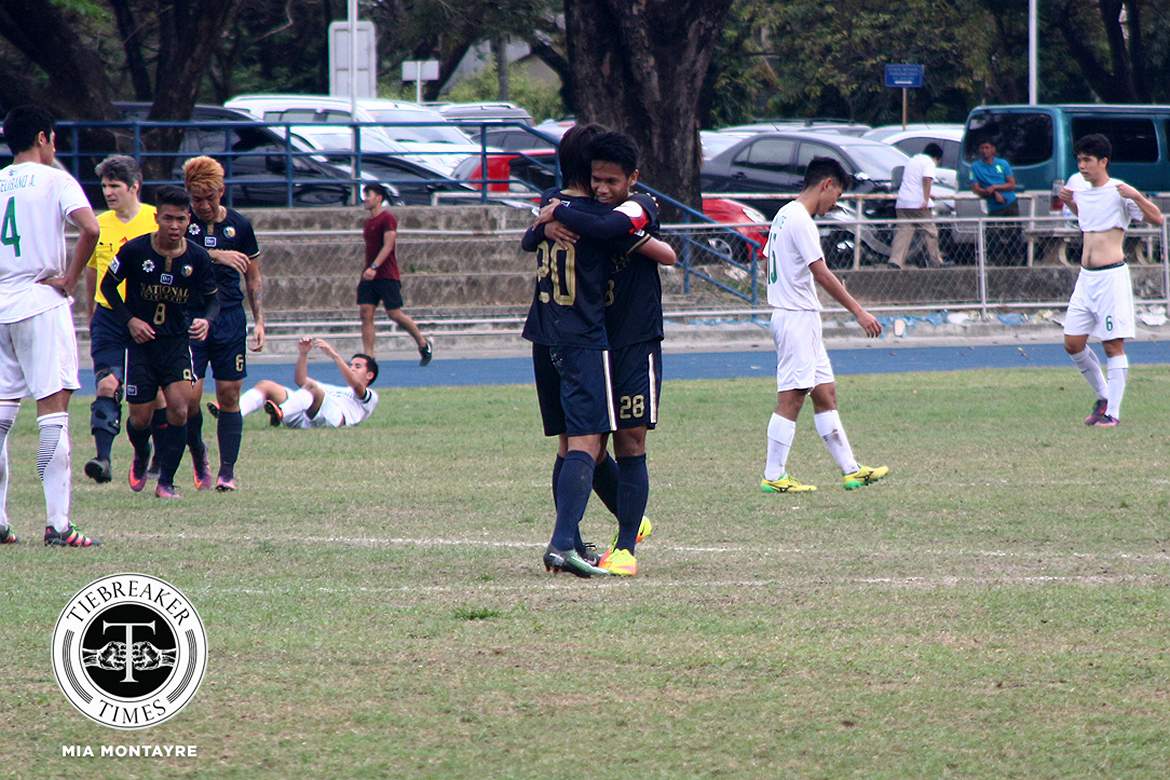 Lawrence Colina was the hero for the National University Bulldogs, as they completed a 3-1 comeback against the De La Salle University Green Archers, today at the Moro Lorenzo Field in Katipunan, Quezon City.

Colina (76′, 84′ & 90+2′ penalty) managed to score thrice in just fifteen minutes for the Bulldogs to give NU their second consecutive win in the UAAP Season 79 Men’s Football Tournament. Rigoberto Joseph (53′) opened the scoring, but his goal wasn’t enough for the Green Archers.

La Salle and NU shot blanks in the first half. The Green Archers played a possession game, while the Bulldogs invited pressure in order to spring a counterattack. Despite the possession, La Salle rarely troubled NU goalie Chris Perocho, who made only an easy save against Rafael Siggaoat’s free kick.

In contrast, the Bulldogs played with more confidence after their win against the Adamson Soaring Falcons. Green Archers goalie Kerbi Almonte performed routine stops against Elmer Sampaga and Jerico Dagsa to keep the game scoreless. Late in the period, Patrick Valenzuela a shot from the left flank which went past Almonte but painfully wide of the post.

After the break, it was La Salle which drew first blood. The Green Archers fired a warning signal towards the Bulldogs when Siggaoat headed Diamante’s freekick over. It took until the 53rd minute for La Salle to break the deadlock, as Joseph capitalized on an NU error to score past Perocho.

NU were rattled. La Salle had all the momentum at this point of the game, although the Green Archers failed to capitalized. The Taft school slowly allowed NU back in the game due to their failure to convert chances into goals.

Patrick Valenzuela ignited NU’s resurgence when his shot was denied by the La Salle crossbar. Come the 76th minute, everything changed. Colina took advantage of a La Salle defensive error to level the game.

The Bulldogs were ecstatic and they transitioned from playing not to lose into going for the win. NU’s turnaround was completed by Colina in the 84th minute when his shot at the edge of the La Salle box crept into the net.

Stunned and frustrated by what happened, the Green Archers sought for an immediate leveler only for the Bulldogs to successfully repel them at every instance. In one sequence, NU broke away from a La Salle set-piece which led to Valenzuela being brought down in the latter’s box.

NU were awarded a penalty, on which Colina made no mistake to score from at the 90+2 minute. The Bulldogs were worthy 3-1 winners against the Green Archers in what could be the turning point of their season.

“The game will not be given to us. We have to fight for the game and then especially quality ng La Salle, quality ng La Salle until the last minute tatakbo yan. Kung hindi kami tatakbo niyan, we lose the game. Buti na lang nakuha (ng players) yung message na we should not stop playing until the final whistle,” explained Aberasturi.