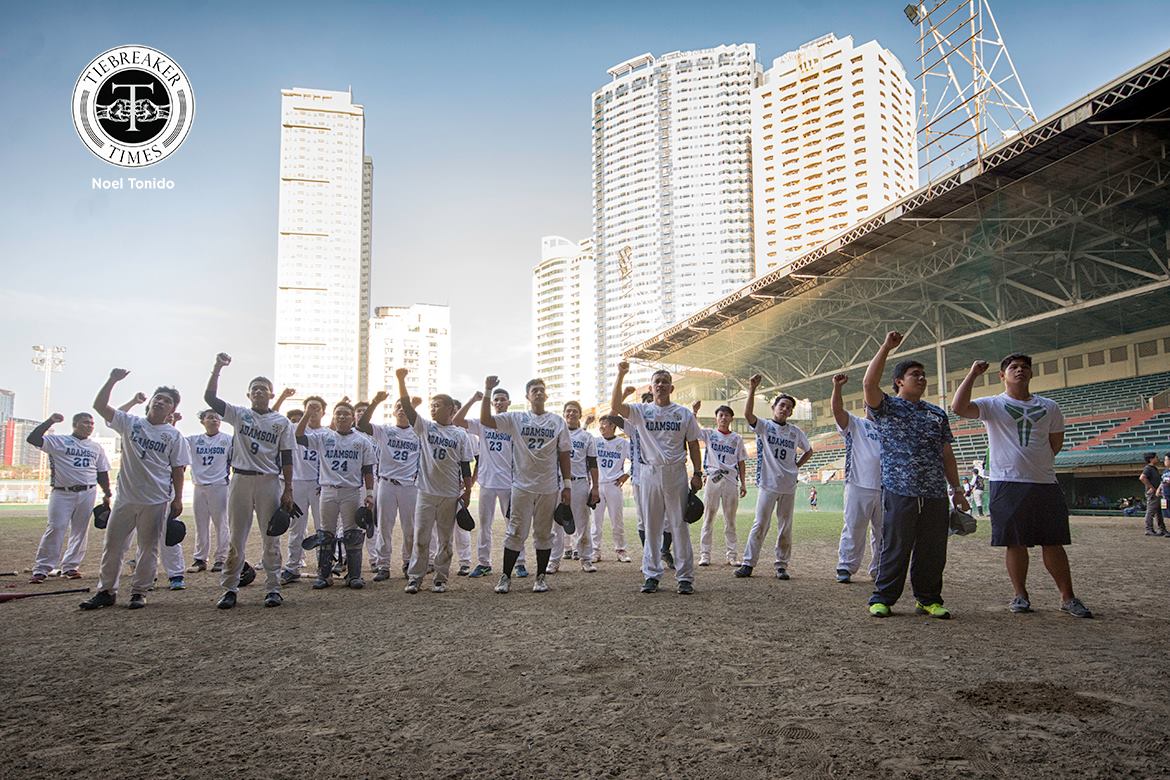 After the UST Golden Sox secured the second Finals spot earlier in the day, the Adamson University Soaring Falcons needed something to hold on to to at least prove that this season was a success. And it was Jerome Yenson who lifted the down Soaring Falcons on his young shoulders, carrying the team to a 4-3 walk-off win against the National University Bulldogs, Sunday afternoon at the Rizal Memorial Baseball Stadium.

The win gives the Adamson Soaring Falcons a fighting chance to cop bronze. In order to do so, they must win over the UST Golden Sox on Wednesday as they continue their suspended game at 9:00am. The game is tied at 6-all entering the 11th inning.

This win though shook off the Soaring Falcons’ nightmares against the Bulldogs, a team they have had battles with for the last two seasons.

And it was all because of the heroics of Jerome Yenson, who did it at both ends.

During the top of the ninth inning and the game knotted at 3-all, the Bulldogs, a team that is hungry to end their season with three straight wins, threatened to extend their lead. A double by Alfredo de Guzman opened the inning while a walk of Junmar Diarao gave NU two runners. Grounders by the next two batters moved the two to prime scoring position with Gregorio Andres next at bat. Yenson though was able to strike out the batter, just his third K of the game, to give Adamson a chance.

At the bottom end of the inning, lefty pitcher Diarao had already felt the fatigue of pitching three straight games of at least having a pitch count of 100. After a strikeout of the first batter, a fielding error by third baseman Jerome Tenorio gave Al Jayson Benito base. A sac fly by Gerald Riparip and intentional walks of the next two batters loaded up the bases for Adamson before Yenson took to the plate.

The senior, who still has a year remaining with Adamson, carefully blasted a line drive hit to right field, the ball falling off the glove of right fielder Evander Tabares. Diarao could only shake his head in disgust while the Soaring Falcons celebrated on the other end.

Steven Manaig paced Adamson’s comeback by going 2-for-4 at bat that resulted to a run. Bryan Castillo, who went 1-for-4, paved the way for the tying run during the eighth inning by bringing home Yenson.

Binarao though could only lament their predicament as he was watching the second game of the day.

After ending the first round with just two losses, they lost two crucial and winnable games against La Salle and Ateneo in the second round that brought them down in the standings. And it was because of the lack of exposure the team had he said.

Only Felix Custodio will graduate for NU.