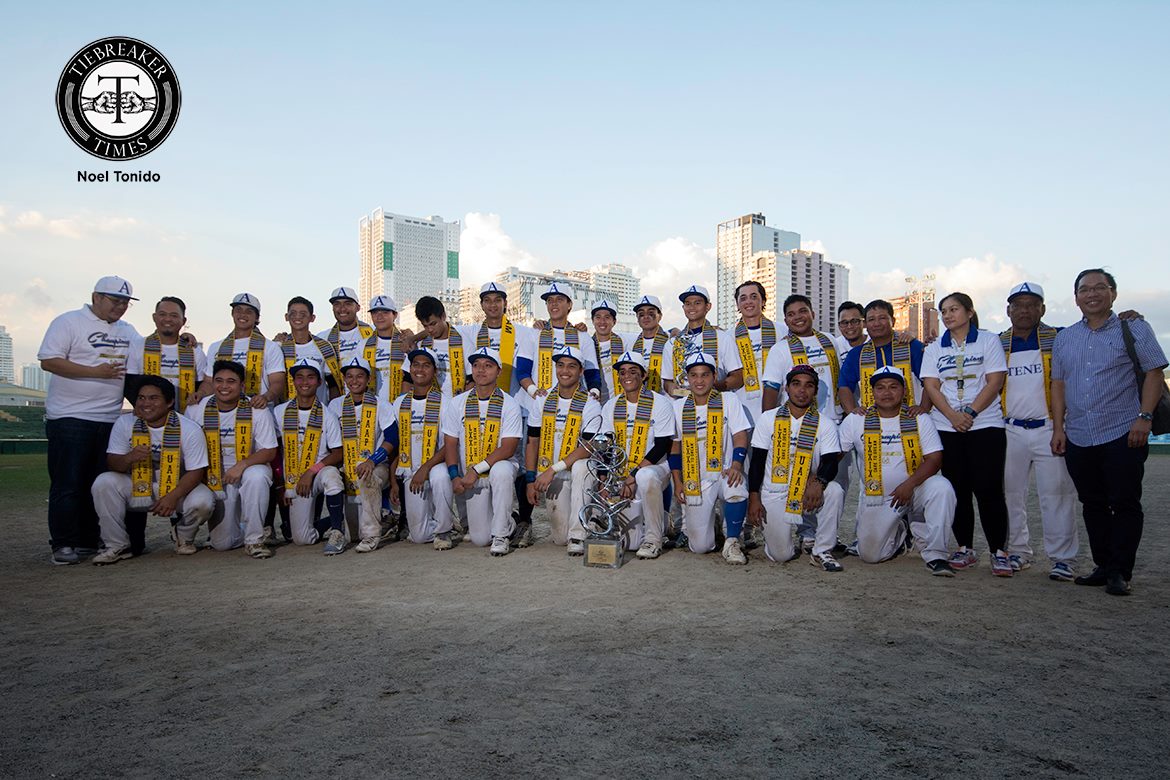 It was not a Sunday, but it was just as glorious

In a masterpiece that took five hours and 27 minutes to finish, the Ateneo de Manila University Blue Eagles survived the elements and the University of Santo Tomas Golden Sox, taking a 14-12, 12-in win to bring the championship back to Loyola Heights, Friday afternoon at the historic Rizal Memorial Baseball Stadium in the city of Manila.

With both teams slugging it out and not giving an inch against each other, it was sophomore Gino Tantuico, who — just like the Blue Eagles — was gunning for redemption, and delivered in the clutch.

After a rookie year that had ended with a nightmarish finale in Game Two of the Finals a season ago, the UAAP Season 77 Juniors MVP blasted a two-out, two-RBI double that brought home Marco Mallari and Javi Macasaet. Tantuico, who went 0-of-6 at bat prior to the play, then took advantage of a throwing error by graduating UST short stop Max Mercado to give Ateneo a three-run edge entering the bottom of the 12th inning.

The Golden Sox, just as they had done the entire game, attempted one last rally at the bottom end of the third extra inning. Lead-off batter Marlon Gonzales and Amiel Lallana connected on hits to take the corners. Benedict Pedracio then brought home Gonzales after a double.

But the Blue Eagles were not to be denied, as they were able to hold the next three batters, highlighted by Finals MVP Paulo Macasaet fanning of Jamil Santiago — his eighth strikeout of the game.

But the turning of the game happened at the top of the 10th inning. With the bases loaded for the Golden Sox, the Blue Eagles were able to hold all three runners, making the play at second base to ground out Ron dela Cruz to stop the attempted UST rally.

“Our break was nung na-hold namin nung nag-full bases sila. When we were able to do that, we knew that this was our chance dahil yung batting order na nga papalo sa amin,” Dizer reflected.

It was a gallant stand though by the Golden Sox as they rallied from a 9-3 deficit to eventually tie the game at 9-all at the bottom of the seventh inning.

Miguel Dumlao, who is playing in his final year, helped the Blue Eagles gain their early lead, allowing just four hits and three runs — all coming in the fourth inning. Rookie Miggy Angeles struggled in his 1 2/3 innings pitched, however, as UST’s rally started with him on the mound.

On the other end, it was Ron Dela Cruz who was the almost-hero for the Golden Sox. He pitched from the fifth inning until the early parts of the 12th inning, while being added to the order later on. The sophomore allowed just six hits during the frame, striking out eight batters while punching in two runs on offense.

Senior Chong Ramos, who played his last game in the UAAP, had three RBI’s for Ateneo. Rapho Balagtas also graduated from the UAAP.

For UST, Kirk Daquis bid farewell to the league by going 3-for-6 at bat, leading to three runs and an RBI. Kirk Peralta, Max Mercado, Jamil Santiago, and Jayrome Kimilat all played their final games as well.

This is Ateneo’s fourth championship in the last five years.