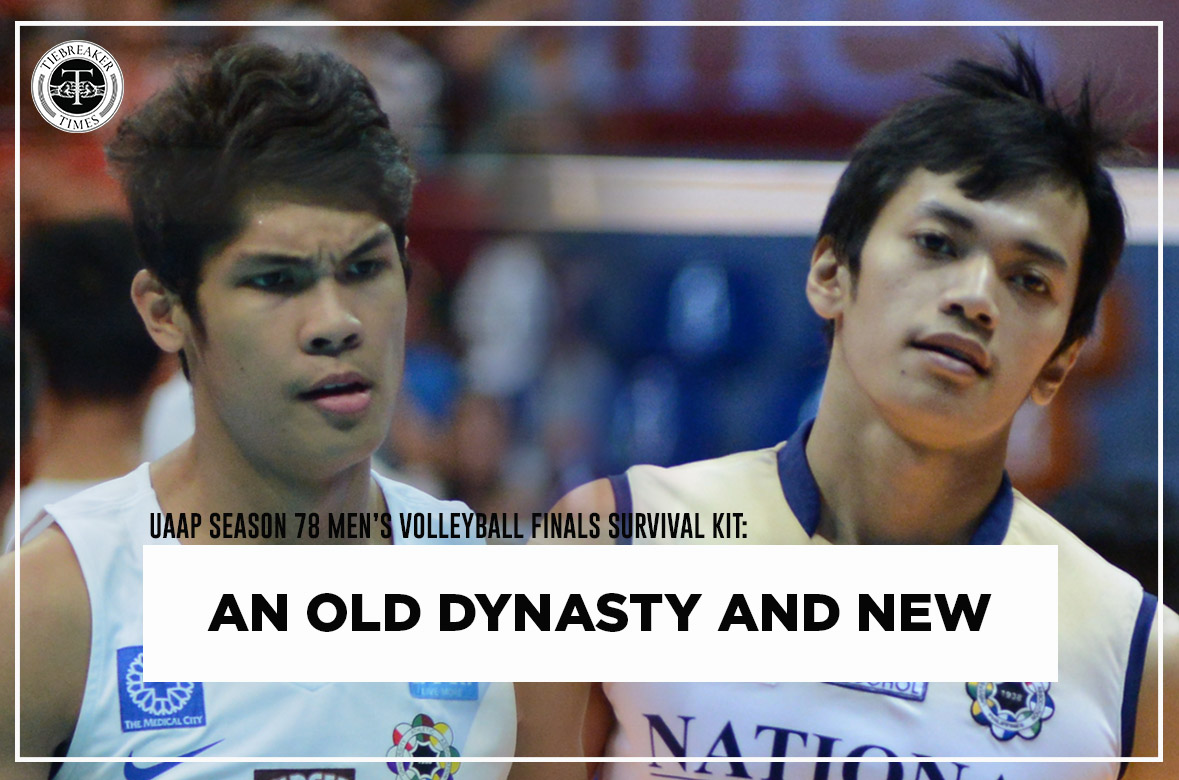 There’s more to this Ateneo-National U than just rigid volleyball competition.

Ateneo’s current head coach, Oliver Almadro used to be NU’s head coach. In fact, he recruited the core of the Bulldogs perennial championship-contending team, only he left the season before NU won its first championship.

Almadro brought his magic to Ateneo and, poof, the Blue Eagles have been in the Finals for the past three seasons and are gunning for their second straight championship.

Although there are still some of Almadro’s old recruits in the NU lineup, the Bulldogs are a new team this season. Filled with rookies and sophomores, NU managed to continue its dynasty, making the Finals for the fourth straight year.

Just a season ago, the Blue Eagles were the young usurpers to NU’s throne. Now, they’re the ones seeking to keep the crown.

Do the Bulldogs have enough to topple the Blue Eagles? Or is Ateneo just too dominant?

——-
Ateneo is the beat team in recent memory

And it isn’t even close. Since last season, Ateneo has lost just three matches. They’re the top two of every statistical category except in blocking. They have the the reigning MVP, who is also the frontrunner for the same award this season, Marck Espejo.

Watching the Blue Eagles compete, it’s like they aren’t the defending champs – still hungry and raring to prove themselves. Coach Almadro gets credit for that. He knows his players can dominate and he reminds them every time, no matter who they’re facing.

Espejo is Ateneo’s most devastating weapon but his teammates have improved enough to the point that the Blue Eagles need not to give him a majority of the sets. Graduating team captain Ysay Marasigan is the best opposite hitter in the league, middle hitters Josh Villanueva and Rex Intal demolish quick and running sets, while there are three viable options for the second open hitter spot in Karl Baysa, Ron Medalla, and Janjan Rivera. Setter Ish Polvorosa has the inside track on another Best Setter plum as the Caviteño marvelously distributes the ball. Rookie libero Manuel Sumanguid has held his own in the back row and deserves Rookie of the Year consideration.

READ  Though rooting for Ateneo, Valdez will be happy for Fajardo no matter what

It’s hard to find a hole in Ateneo’s game. They swept the season series against the Bulldogs, dropping just one frantically tight set. In that set they lost, Ateneo helped NU greatly, surrendering errors down the stretch that erased their sizable lead.

Perhaps that’s NU’s hope at winning this series: bank on Ateneo’s errors. The Blue Eagles put so much power into their hits that they often commit serve and attack errors. A set where NU can get nine or ten errors from Ateneo leaves the Bulldogs needing only to score a few points off their attacks and blocks. Given Ateneo’s unyielding defense, NU will have tough time scoring.

As mentioned earlier, nearly the entire NU lineup still has at least three seasons together. Setter Vince Mangulabnan is the only one exhausting his playing eligibility.

But, even if they are younger, the Bulldogs can already match Ateneo’s athleticism at every position. Even if they lost a plethora of veterans, the puppies quickly grew into wolves. Madz Gampong, James Natividad, Bryan Bagunas, Kim Malabunga, and Francis Saura hit harder and jump higher than their predecessors (mostly because they’re in better shape).

But, as with any young team, NU had to deal with a myriad of issues. Their passing and digging was spotty. They gave up errors in critical moments. They easily got rattled in pressure-packed situations. Had it not for a freak injury to Adamson’s setter, NU might not have even made the Finals.

Experience is what these Bulldogs need. Whether or not they can do a year’s worth of maturing in a week remains to be seen.

NU might as well wear Underdogs on their chest rather than Bulldogs.