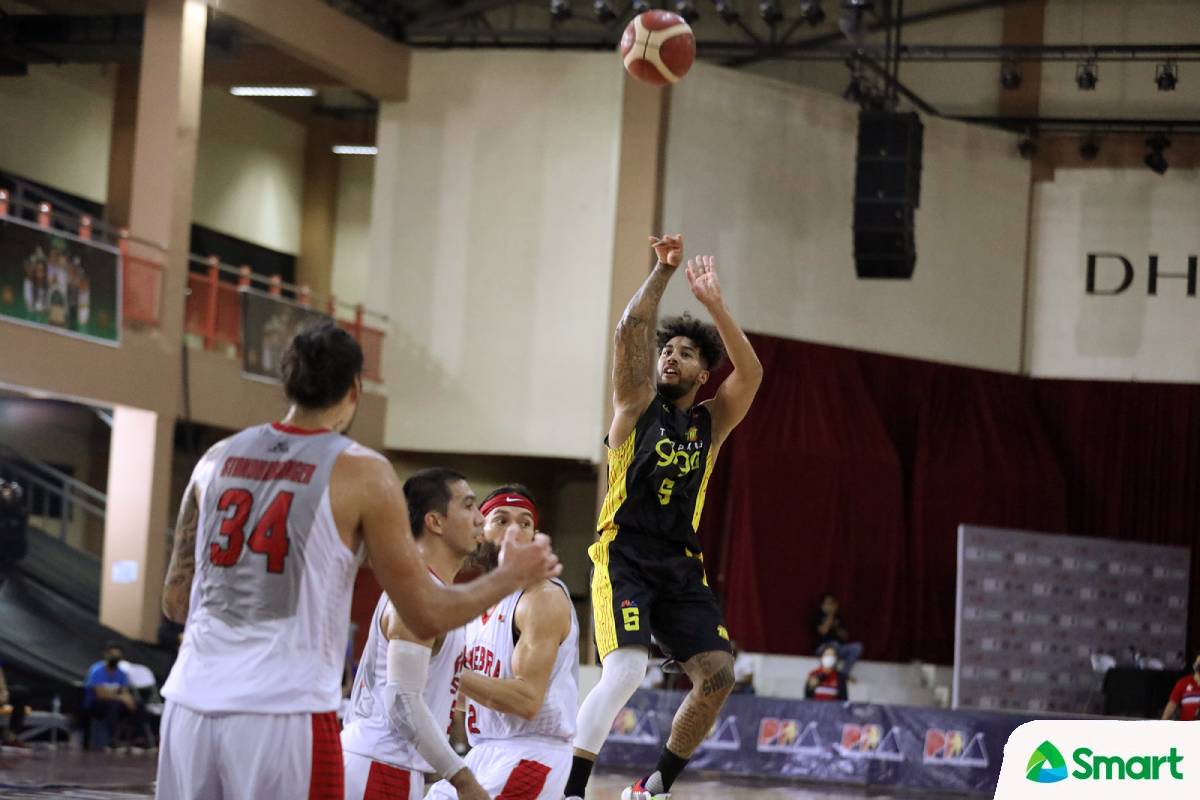 The Tropang Giga turned the game around in the second period as the top-seeded crew put its win-once incentive into good use to get back on the very same team that tormented them in the bubble finale last December.

This marked the second straight all-Filipino tourney that the defending champion got booted out. In Clark last year, San Miguel Beer saw its unprecedented five-year reign end in the hands of Meralco in the quarterfinals.

“I think one of the benefits of us getting to the quarterfinals first, getting to the no. 1 spot was that we were able to get some rest,” said head coach Chot Reyes as his team had 10 days off before playing in the quarters. “But when it extended, we were really worried that rest might turn into rust. Fortunately, because of the effort of the players today, we got the job done.”

Roger Pogoy led the Texters with 16 points. Troy Rosario supplied 15 points and five rebounds as Mikey Williams filled up the stat sheet with 11 markers, seven boards, five assists, a steal, and a block in over 36 minutes.

Kib Montalbo added 10 points in another starting gig as all but four players scored at least two points in the victory.

It wasn’t all easy for TNT, though, as it saw itself staring at a 19-25 deficit early in the second period. But it managed to turn the tables with a 16-2 run to take a 35-27 lead with less than four minutes left before the turn.

They would never relinquish their hold of the lead since then. And it only turned from bad to worse for the Barangay in the third quarter as a narrow eight-point gap became 18, 64-46, before the chapter’s end.

“The start was extremely difficult for us. But in the end, we kind of talked about it and we’ve been off for 10 days and so we expected that we weren’t as sharp to start the ball game,” offered Reyes.

“And so we started to discuss that we just need to keep grinding and count on this defense to stay in this game so the game was a lot harder than the score indicated,” added the five-time Coach of the Year.

The MVP Group’s crown jewel will now wait for the winner between the Beermen and NorthPort for their opponents in the semis.

“That’s the problem that we are going to try to solve now in this break. We just finished one problem, so it’s on to the next problem,” said Reyes.

Meanwhile, Ginebra was led by Christian Standhardinger with 17 points and 19 rebounds in the defeat. Defending BPC Stanley Pringle was the only other double-digit scorer for the Barangay with 15 markers.

The Gin Kings were already without Japeth Aguilar and Scottie Thompson but their woes piled up when Aljon Mariano hurt his ankle in the second period.