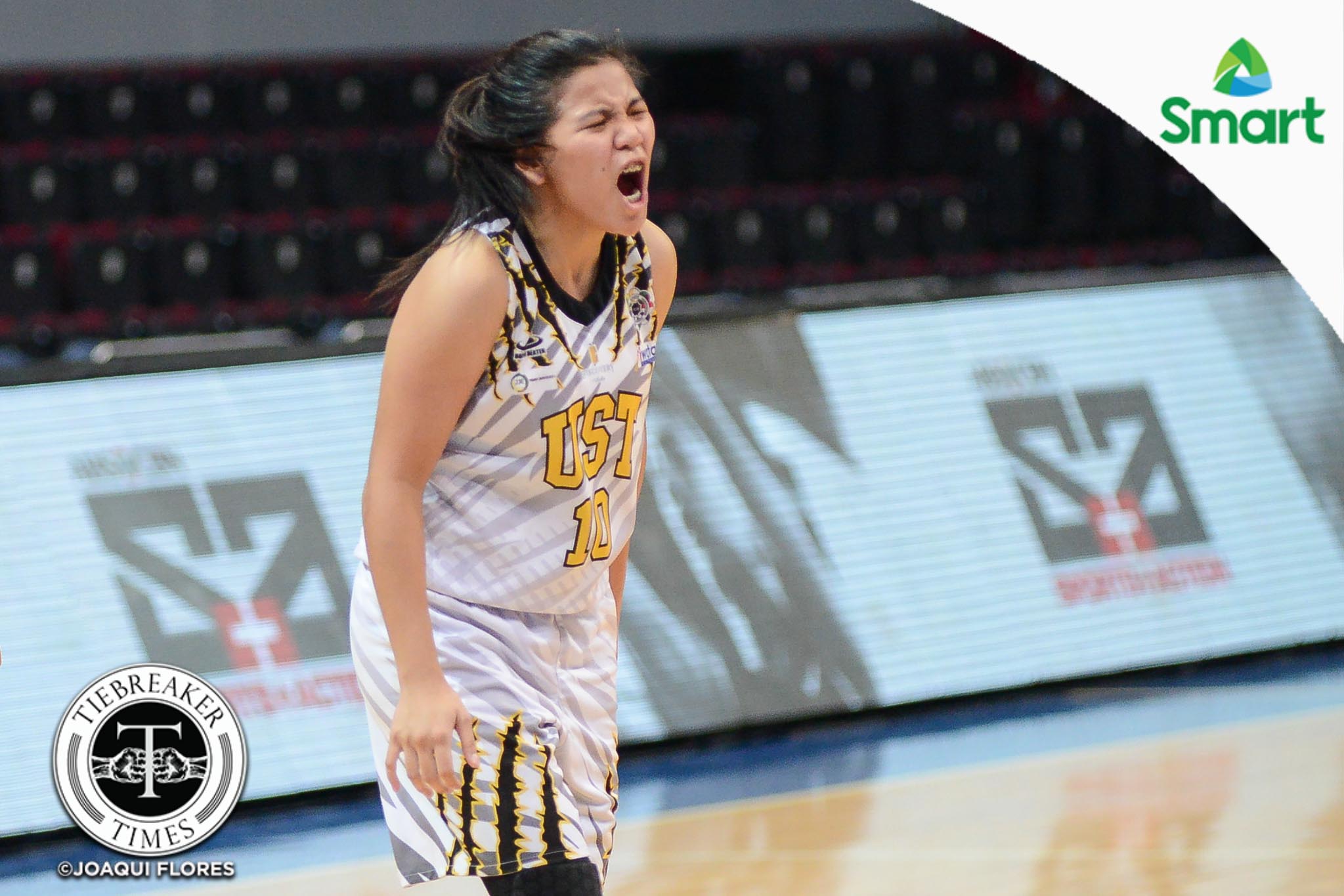 A place in the UAAP Season 79 Women’s Basketball Tournament post-season beckons for the University of Santo Tomas Growling Tigresses after they prevailed 74-70 over the Adamson University Lady Falcons, Wednesday morning at the SM Mall of Asia Arena.

Candice Magdaluyo led UST with 16 points on an efficient 4-of-6 shooting from the field and a perfect 5-of-5 from the stripe. Shanda Anies scored 14 markers as well for the Tigresses.

But it was Jhenn Angeles who bucked Adamson’s hijack attempt, scoring 10 of UST’s last 13 points.

“It was not a perfect game but the W is a W for us,” commented UST mentor Haydee Ong. “We have to work harder for UE, our last game, especially on those offensive rebounds that Adamson had. It (almost) cost us the game. Thank you for our godly threes.”

The España school enjoyed a good start to the game as it amassed a 35-28 cushion before the break. UST then achieved its biggest lead of the ballgame at 39-28 early in the third quarter when Ann Gandalla scored four unanswered points.

Adamson didn’t waver, though, as it enacted an 11-2 run capped off by Jo Razalo’s two free throws. Magdaluyo then shot a trey to give the Growling Tigresses a slender 55-51 edge from the Lady Falcons at the end of the third quarter.

With just 40.2 seconds left in the game, Angeles scored to give UST a 72-62 separation from Adamson. Undeterred, Adamson was able to trim the UST’s advantage to just 72-70 with only 4.5 seconds remaining in the game.

Angeles was then fouled and she converted her two free throws as UST eventually held on 74-70 over Adamson. “I’m just happy we have the win and we’re half a game ahead of Adamson,” Ong said.

Three point shooting won the game for UST as it shot 34.78 percent from beyond the arc compared to Adamson’s 18.52 percent. It saved the Growling Tigresses as they were outscored inside the paint at 20 points versus the 36 made by Adamson.

Jamie Alcoy finished the game with 16 points but was just 7-of-19 from the field. She added seven boards to her tally. Kaye Pingol and Jo Razalo added 13 and 12 points respectively.

“Nung first round we had a really bad game against UE. Tomorrow we’ll start viewing and make some adjustments how to beat UE. We will work harder than today,” surmised Ong.