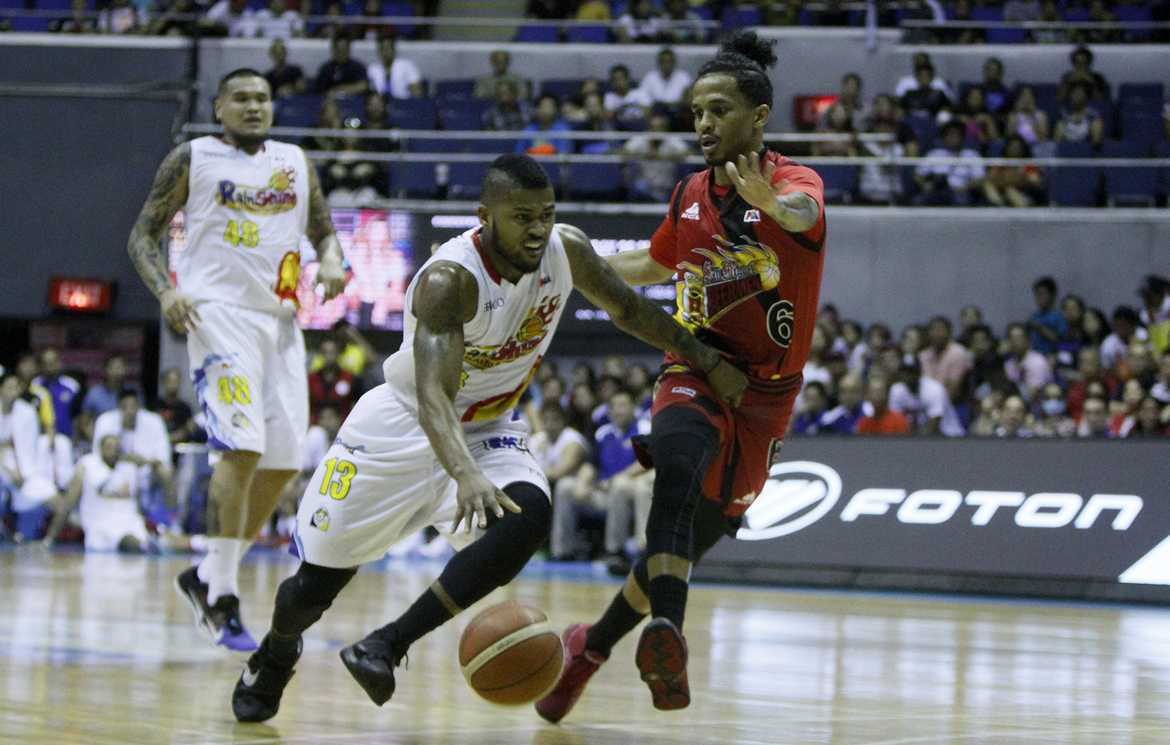 Down by a huge margin at the early phase of the semis opener, the Rain or Shine Elasto Painters shrugged off their slow start en route to a grinding yet impressive 98-94 come-from-behind win against the top-seeded SMB Beermen in Game One of their best-of-five series at the Smart-Araneta Coliseum.

It was a fuming start for the Beermen, who started the game on a sizzling shooting display. Import Tyler Wilkerson single-handedly outscored the Painters, as he had 20 points in the first twelve minutes of action. SMB drained six triples that left Rain or Shine on the low-end of a 33-17 first quarter ending.

The Painters started their crawl back in the match by erasing a 17-point hole in the second quarter. Paul Lee and Jericho Cruz combined for an 8-0 mid-quarter run to make a single deficit game. Rain or Shine pushed their run to trim the lead to as low as six. However, June Mar Fajardo powered his way for the first half’s last two buckets to give SMB a ten point advantage at the break.

The locals stepped up for the Painters in the third frame wherein they opened up the new half on a 7-0 spurt. Despite SMB hanging on to their lead, Rain or Shine adjusted on the defensive end by letting Wilkerson do the work and limit touches of the other Beermen. By the end of the third, Wilkerson already had 32 but an all-around effort by the Painters made it a 75-72 game entering the fourth.

Elasto Painter reinforcement Henderson-Niles had a pedestal 13 point effort in the game. However, a chunk of the offense came in huge in their fourth quarter run, together with his defense on SMB’s end. Fast foward to the last two minutes, the game was knotted at 92 apiece.

Afterwards, Fajardo knocked down a paint basket, but it would be SMB’s last score for the game. On the other hand, Jeff Chan knocked down a cold-blooded triple to give them the lead. San Miguel had chances to regain the advantage but missed on their chances, while Mav Ahanmisi sealed the game with three free throws.

The Painters had more points in the paint and fastbreak points, 52-42 and 12-3 respectively. Ahansmisi produced a stellar 23 point, nine-rebound effort in 8/13 shooting from the floor.

“We’ve been against San Miguel before in the playoffs and was unsuccessful. We just didn’t give up,” said coach Yeng Guiao after the game.

In addition, Paul Lee played 28 minutes on a good run off the bench. Guiao said, “We’ve been saving this series for Paul Lee. We gave him playing time now and it’s a good thing for us.”

Game Two of this series will be on Tuesday, 7:00pm still at the Big Dome.