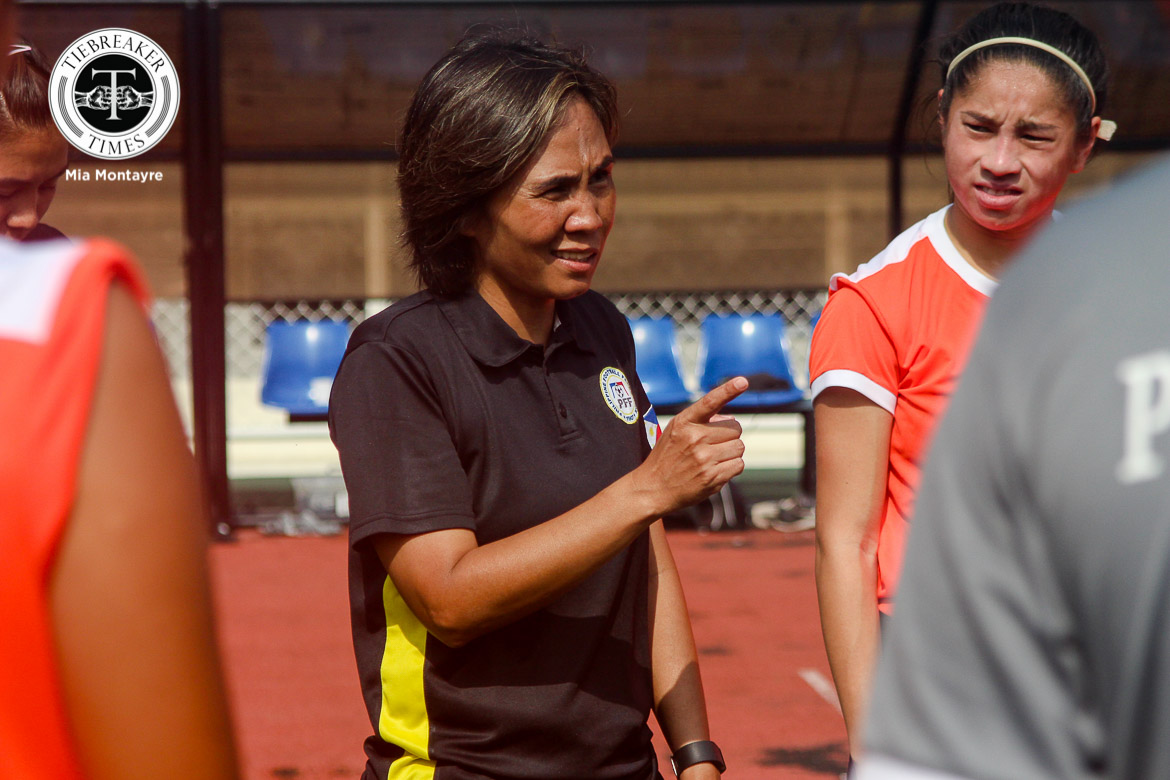 The Philippine Women’s National Football Team are off to Myanmar to compete in the 2016 ASEAN Football Federation Women’s Championship. Hoping to at least reach the semi-finals for the first time in the competition’s history, the Philippines will be facing the likes of Thailand, Vietnam, and Singapore in the group stages.

Guiding the PWNT is head coach Buda Bautista. This is the second time Bautista takes over the squad as head coach. Previously, she had been the assistant to then-head coach Ernest Nierras, and had even been a player years ago.

“Stress” was the word jokingly used by Bautista when asked how it felt coaching the PWNT for a second time. She then turned serious and stated that stress and pressure come together in coaching the national team.

Out of a pool of roughly fifty players, and three weeks of intense training sessions, the current PWNT squad is made up of twenty Filipinas who are based either here in the Philippines and overseas in the U.S. Bautista shared, “Right now we have a lot of overseas players which is good. However, ang questionable lang which we’re still working on is yung fitness nila and then I guess they’re (also) a bit too young. In terms of a bit too young, hindi nagkakalayo sa local.”

Bautista added that at least this time around, many of the locals are on their second tour of duty, and that many of the Filipina-Americans have had exposure abroad.

In terms of actual play, Bautista admits that the current PWNT edition lacks goals from up front. Unlike last year, the team will be without the services of Joana Houplin, who has scored 12 goals for the national team since her debut three years ago, and Jesse Shugg, scorer of 3 goals in 8 appearances. Both strikers are unavailable due to personal and professional reasons.

That problem, though, is boosted by the team’s wingers.

Bautista believes that it’s all up to the players to show a “nothing is impossible” mentality in their upcoming tournament. In addition to that, she opined that her players’ high mental fortitude made improving the team’s fitness all the more tantamount.

As mentioned earlier, the Philippines are up against Thailand, Vietnam, and Singapore in the group stage. A tough group, when one considers that Thailand participated in the Women’s World Cup last year, while Vietnam are championship contenders in the region. “Definitely parang papasok ka sa butas ng karayom”, Bautista reflected.

Nevertheless, Bautista did not eliminate the possibility of getting positive results through discipline and adhering to the team’s strategy and philosophy, while reiterating that intense defense would be impossible without proper fitness.

“Definitely yung teams ngayon will be hard to play against pero siguro with the right tactics, with the right attitude, right perspective ng mga players, if they really commit with our concept, and malay mo bilog ang bola so maswertehan natin.”

The PWNT face Thailand on matchday one (July 26, 2016; 4:00 PM KO), then Vietnam exactly two days later. Their final group stage game will be against Singapore (July 30, 2016; 7:00PM). In spite of the odds being stacked against the Philippines, Bautista and the rest of the PWNT will be gunning for a first semi-finals appearance — at the very least.

*With reports from Mia Montayre