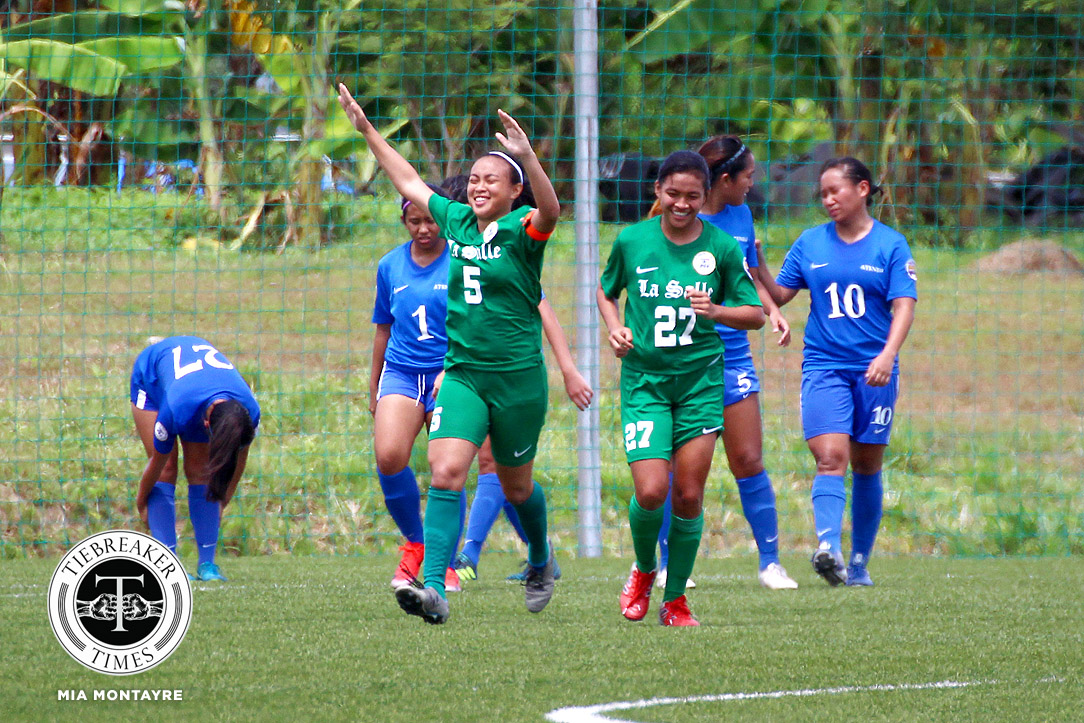 Though positioned second of the table, the De La Salle University Lady Booters are still in the race for this year’s PFF Women’s League title, and the opportunity to defend the crown is still very much alive – especially after they dominated the clasico with perennial rivals Ateneo de Manila University Lady Eagles.

Meanwhile, league leaders University of Santo Tomas Lady Booters  stayed ahead by two points after their sixth straight win over the University of the Philippines Lady Maroons, who are now banished to the bottom of the table.

Clubs Green Archers United FC and Hiraya FC have also moved up the ladder, with the former bidding goodbye to last place – they are now in seventh – and the latter in fourth place by virtue of a default victory when opponents De La Salle Zobel failed to appear at Carmona. 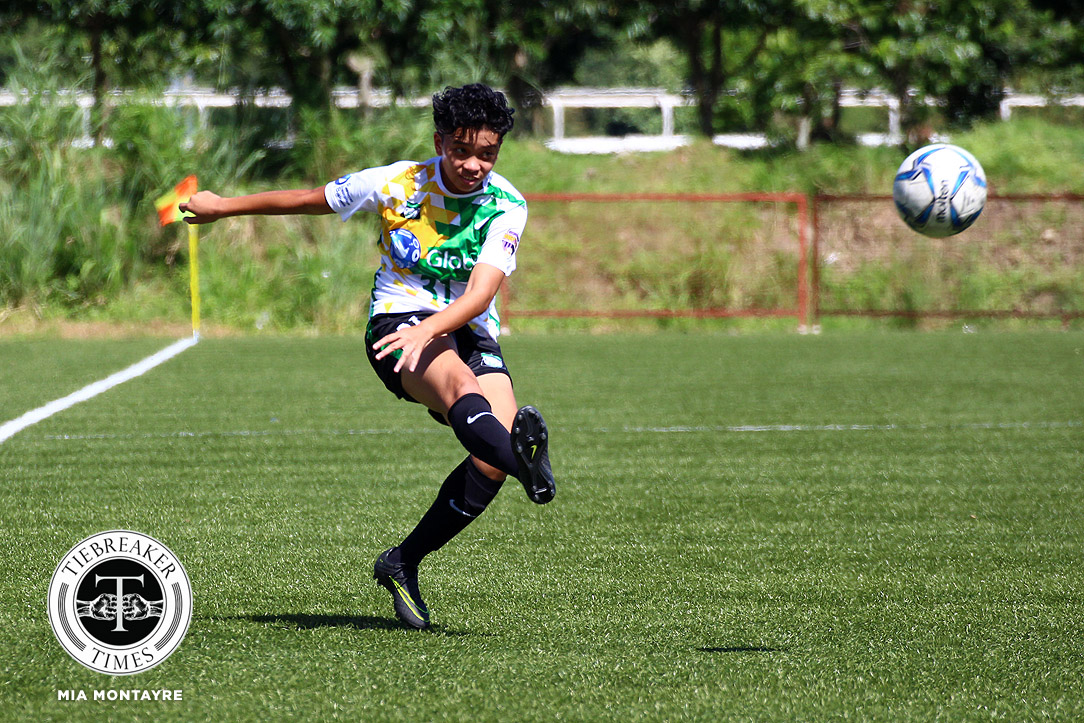 Surprisingly, it was GAU who came out firing, constantly attacking OutKast’s half in the early goings.

National team and UAAP Season 80 stalwart Kyla Inquig made immediate impact upon her season debut, orchestrating play and scoring a 25th minute goal off a back pass.

The Alabang-based outfit had multiple chances to add to their lead with Maria Layacan’s penetrating runs but the young striker could not finish.

OutKast would find their momentum later on but GAU stood firm and keeper Inna Palacios was quick on her toes in protecting their slim lead which eventually materialized into their first win.

Coach Elvin Marcellana was visibly happy of his side’s feat and heaped praise on Inquig.

Marcellana considers himself lucky, having national team players filling every vital position to boost his squad, and hopes the younger members can step up.

Rookies deliver as UST subdue UP 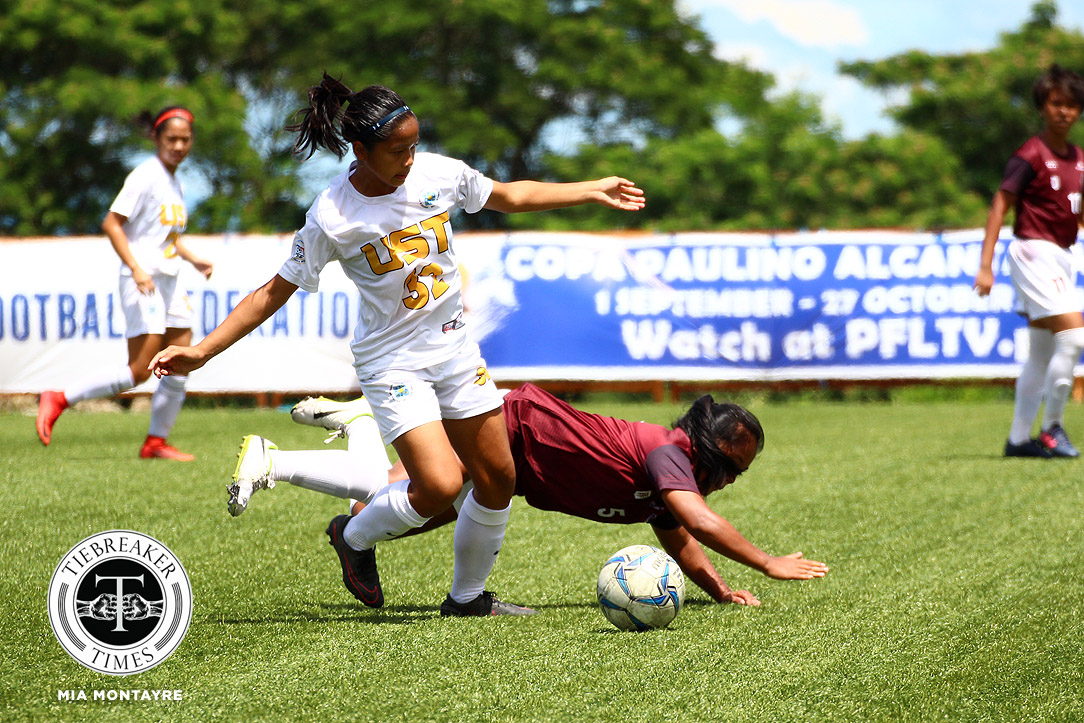 The University of Santo Tomas kept their momentum going with another confident 4-0 win, this time against tricky UAAP opponents University of the Philippines.

Despite not having much success yet in this league, the Lady Maroons immediately went on the offensive. But the Lady Booters of UST stayed calm and held their ground, eventually finding their opening goal after 16 minutes.

Mika Punzalan closed in on a blocked shot by goalie Vanessa Estrada to net the first goal in the contest. Fifteen minutes later a deflected ball went the way of the rookie again and she fired a shot from long range for the deuce.

Right before halftime, Shelah Mae Cadag – who has scored in every match thus far – chipped in an injury time goal to triple their lead. This also brought her league total to 21 goals, which ties the record set by Kyra Dimaandal from last season.

The Diliman-based squad cleaned up their act in the second half ,but were still unable to produce goals which could have rewarded their efforts. Substitute keeper Nic Adlawan made sure they did not concede again, until the final two minutes of the contest saw Lalaine Durano make the breakthrough for another rookie goal to give Aging Rubio’s side a satisfying win.

But even with the end line in sight and UST in great position, the tactician refused to get ahead of herself. 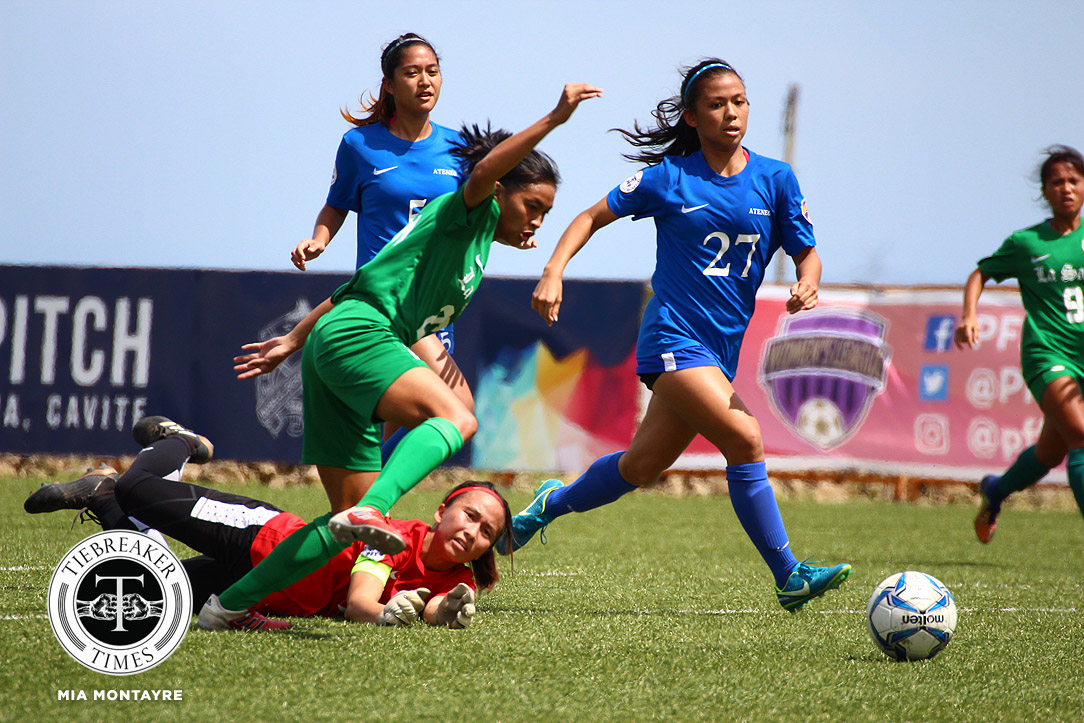 Even with one team performing well near the top and the other struggling in the bottom half this season, it is always a captivating affair whenever the De La Salle University and the Ateneo de Manila University clash. Yet the Lady Archers continue to not give any ground to the Lady Eagles, overpowering them 4-0.

Ateneo had been doing well by keeping La Salle at bay, even when the latter drew first blood in the 22nd minute. Mariane Caparros looked like she had the ball secured from a free-kick until it slipped from her gloves and into the waiting feet of Alisha Del Campo, who only had to tap it in.

The Katipunan-based squad then almost equalized on Martie Bautista’s wide open shot inside the box, except it went straight into the mitts of Daniell Javier.

Mindful of their near misses in the first half, La Salle picked things up in the second.

In the 63rd minute, Kyra Dimaandal combined with Bea Delos Reyes and Sara Castañeda for a nifty finish. The captain followed it up with another golazo fifteen minutes later, when her free-kick curled into the top left corner to bring DLSU’s lead to three.

Del Campo capped off a good Sunday morning for the green and white when she unleashed a thirty-yard bomb after beating her markers and an onrushing Caparros in the 82nd minute.

Mentor Hans-Peter Smit did not have a lot of complaints, but remained pragmatic.

“The girls played better today than last week but [are still not a hundred percent], far from it. Maybe eighty or seventy-five [percent] because three of my girls are tired,” he explained, pointing out that players Castañeda, Del Campo ,and Irish Navaja are on double duty with the national team, who are busy training for the Olympic Qualifiers.

“Not too many mistakes so okay lang. The heat is a big factor kasi for both teams, but I still think na my team is in better shape than most of the other teams. I take pride in that. As long as it’s an upward movement in the progress and development of the team play, I’m happy,” Smit added.

The PFF Women’s League continues on Saturday, October 20, at the PFF National Training Centre in Carmona, Cavite where Tuloy FC face the University of the Philippines at 8:00 A.M., followed by Green Archers United FC tussling with the Far Eastern University at 10:30 A.M.

On Sunday, October 21, the University of Santo Tomas will seek to stay perfect against OutKast FC at 8:00 A.M., while Ateneo de Manila University will try to avenge their rivalry loss against younger La Sallian team De La Salle Zobel at 10:30 A.M.