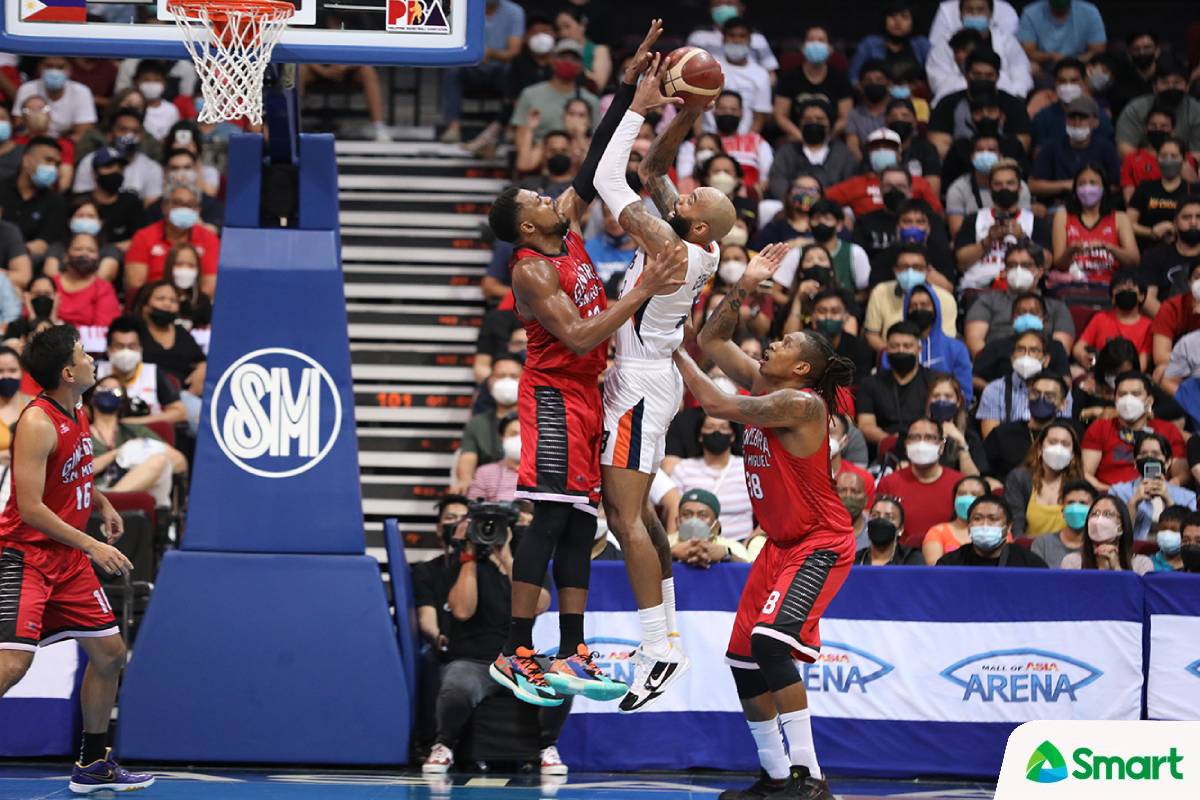 Meralco finally saw its comeback bid end up with a victory as it turned back Ginebra San Miguel, 83-74, to regain control of the 2022 PBA Governors’ Cup, Sunday night at a packed Mall of Asia Arena in Pasay.

Tony Bishop continued his solid play, while Chris Newsome and Allein Maliksi found their touch again as the troika helped the Bolts rally from 13 down in the first half on the way to taking the 2-1 lead in the best-of-seven affair.

It is a situation that the MVP Group-owned ball club is surely familiar with, since they also led 2-1 in the rivalry’s first Finals chapter in 2016.

“In this business, you can’t really live in the past. Just have to live with what’s going on right now,” said head coach Norman Black.

Bishop fired 30 points, picking up where he left off in Game Two last Friday that saw him drop 31. He shot 44-percent and collected 16 rebounds.

Newsome, on the other hand, submitted 20 points after scoring just a total of 15 markers in the series’ first two games. The 6-foot-2 guard also chalked up 11 rebounds and five assists in nearly 42 minutes of action.

Maliksi chimed in 10 markers, indeed redemption was done right for the veteran gunner after going scoreless in the previous outing.

And together, they would provide the finishing blows to lift Meralco. With the game tied at 69-all, Bishop’s split ignited an 8-2 run — capped by a Maliksi jumper — to build a 77-71 lead with 5:39 remaining.

The Gin Kings, though, cut the gap to three behind Christian Standhardinger, but Newsome and Bishop made a jumper each to keep their foes at bay. Maliksi then joined the fray in the dying seconds to settle the final count.

More than those timely baskets, defense really proved key for the Bolts. They limited the opposition to just three points in the final 7:31 of the match.

“Both teams played really good defense tonight. You can tell that by the score. It was very difficult to score out there, so it’s just a matter of just getting some stops and trying to hold on as long as we could,” said Black.

Meralco was also able to limit Justin Brownlee to his lowest output this conference with just 19 points — that, after he appeared to go off for another explosive outing as he scored 11 of his points in the opening period.

The Best Import candidate shot just 8-of-21 from the floor, although he registered 15 rebounds, seven assists, and six blocks to lead Ginebra.

Brownlee was backed up by Christian Standhardinger’s 17 points, as well as the 11 points apiece of LA Tenorio and Scottie Thompson.

Game Four is on Wednesday, 6 p.m., at the SMART Araneta Coliseum, with the BPC and Best Import coronations set to take place prior.