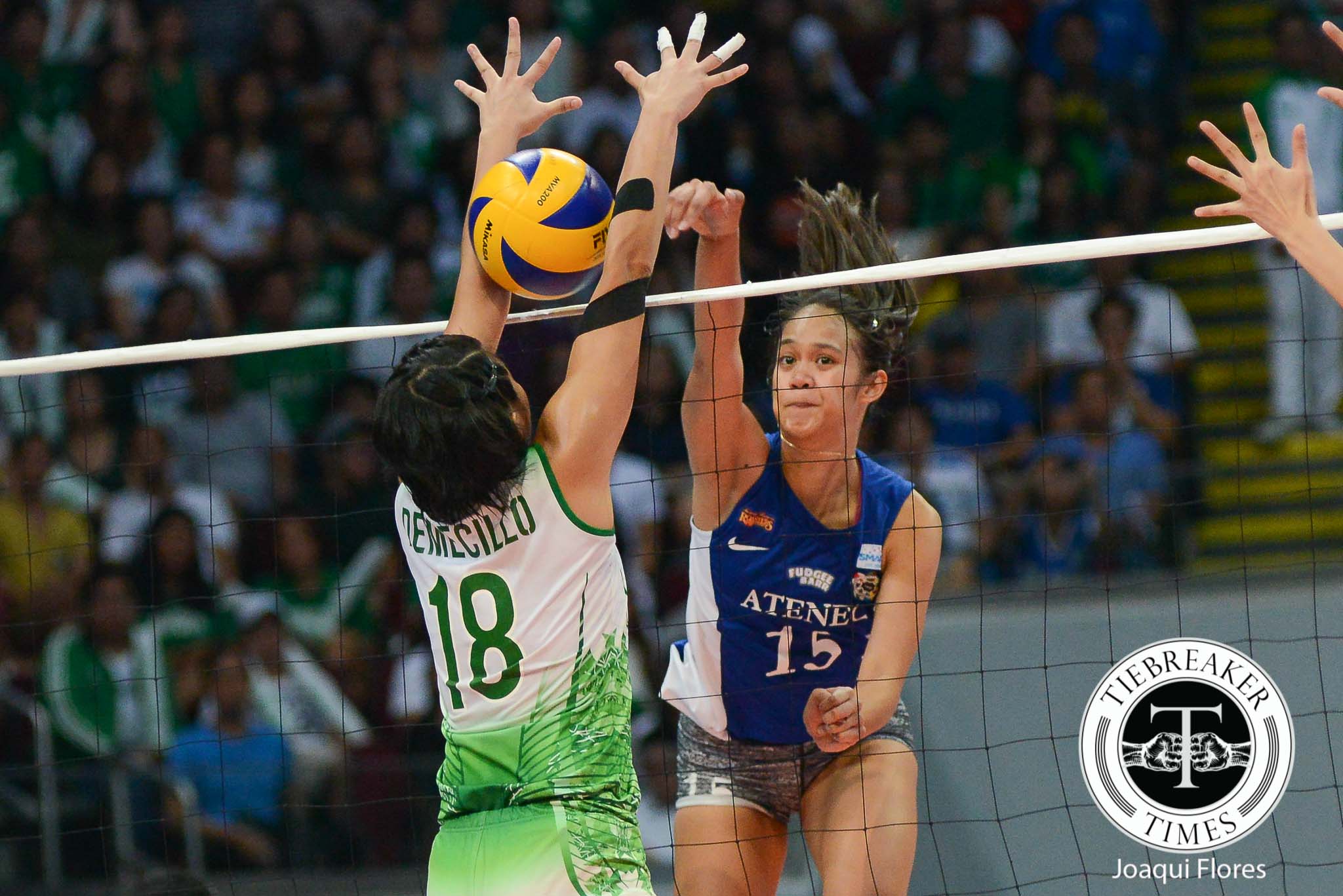 The Lady Spikers picked up right where they left off in the first round, serving long and hard and giving the Ateneo back row fits. Drawing strength from their stellar defense, La Salle buried the Lady Eagles in a 16-8 hole. DLSU had set point at 24-15 when Ateneo finally gasped for breath. Alyssa Valdez threw down four consecutive hits to trim the lead down to 24-19. La Salle had exhausted its two timeouts when their net violation got Ateneo within three, 21-24. Luckily for La Salle, Majoy Baron had her head up in the next play, crushing an overpassed ball to finally end the set.

Momentum swung wildly in the second set as both teams traded crowd-igniting plays. La Salle seemed to have the set in hand after Majoy Baron scored thrice in a 4-1 run that placed them ahead, 21-19. The Lady Spikers, however, lost their offensive touch. In Ateneo’s set-clinching 6-1 run, La Salle coughed up four attack errors, including the last two points, tying the match at a set apiece.

Ateneo then took their turn stifling the La Salle back row, as the stellar ball control that had kept the Lady Spikers alive in the previous set dissipated at the most crucial point in of the third frame. Alyssa Valdez coaxed free balls and topped off a 4-0 run with an ace that gave Ateneo a 20-15 lead. After a Mika Reyes block-service error sequence, Ateneo opposite hitter Kim Gequillana unleashed her serve, icing the set with three straight aces.

READ  Valdez on Finals loss: 'The mark of an athlete is how you recover'

La Salle then showed the grit they had lacked in tight situations to force a fifth set. After giving up another lead late, La Salle’s veterans provided a much-needed offensive push. Tied at 18, La Salle got points from Baron, Galang, and Demecillo to clinch a 22-20 lead. Baron then caught an Alyssa Valdez cross-court hit to gain set point, 24-21, before setting up Mika Reyes’ tip on an overpassed ball.

Ateneo then sealed the win with a spectacular fifth set performance. The Lady Eagles blocked everything that La Salle sent over the net. After a 2-all tie, Ateneo stormed to the win with a 13-3 run. Three of La Salle’s five points in the fifth set came from Ateneo errors

“A win is a win pero we still have to keep focused sa mga next matches pa namin. We reall came here to play and enjoy game. We played really happy and that was the difference,” said Ateneo team captain Alyssa Valdez.

Valdez topped all scorers with 24 points off 20 attacks, three aces, and a block. Jhoana Maraguinot and Bea De Leon had 14 and 13 points respectively.

Jia Morado and Kim Fajardo had a combined 123 excellent sets, with Morado notching 62, while Fajardo had 61.

The Lady Eagles will have a twice-to-beat advantage and (12-2) will take on either the National University or University of the Philippines in the Final Four. La Salle (10-3) will face the Far Eastern University in the Final Four but still have the NU Lady Bulldogs on Wednesday at the FilOil Flying V Centre.