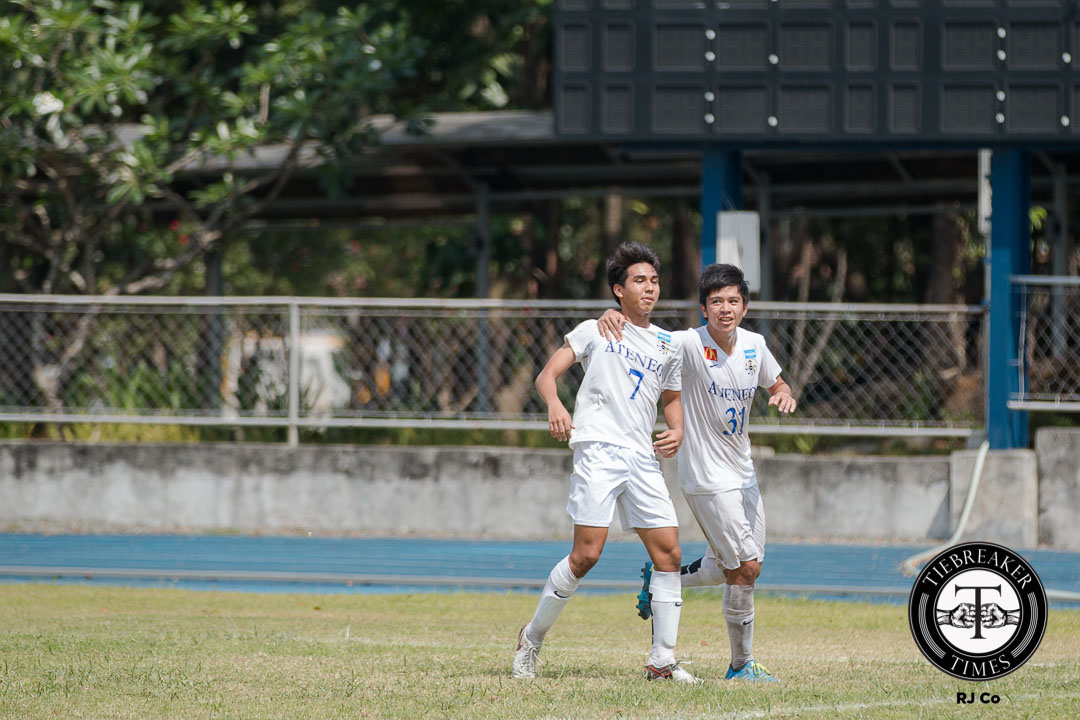 The Ateneo Blue Eagles emerged triumphant over the UE Red Warriors, 2-1, Thursday morning at the Moro Lorenzo Football Field to end their first round of the UAAP men’s football on a high.

There weren’t a lot of opportunities created by either team in the first 30 minutes of play. It was not as if both teams lacked ambition in opening the scoring, but their plays were either easily read or poorly coordinated. Having said that, it took a set piece to produce the game’s first chance. Bon Opeña tried to whip a decent shot from a free kick eight minutes into the game, but his attempt hit the wall that enabled JP Oracion to collect with ease. The Ateneo goalkeeper was called into action again one minute later when he was able to stop Regil Galaura’s shot.

Ateneo then got themselves going a few moments later. The hosts’ first registered shot occurred 11 minutes courtesy of Masyu Yoshioka. The Japanese midfielder found room to shoot inside the box but defender Jrv Malayo was there to block his shot. The UE defender came up big once more when he prevented a Julian Roxas attempt from testing UE goalie Lendon Clores.

As the half progressed, both sets of players were bothered by the punishing heat. Refreshed after a 26th minute water break, both sets of players moved forward more comfortably. Red Warrior Opeña got the ball rolling when he tried a curling shot from outside the box, which just went wide at the 28th minute. Eight minutes later, a chance came on the other end of the field. Mabanag’s free kick located Javier Gayoso who in turn headed the ball softly towards Clores.

The Mabanag-Gayoso tandem was at at the 39th minute. The captain played Gayoso on for the latter to string a shot. Unfortunately for them, Clores was alert to deny the rookie the breakthrough goal. At that point, the Ateneans were smelling blood and finally quenched their thirst for a much-needed goal four minutes before halftime. Sustained pressure from the Blue Eagles earned them a corner taken by Mabanag. The senior midfielder drilled in a curvy cross that ended up in the back of the net. Clores tried to push it out but his touch only placed the ball further into the net. At 1-0, Atenei seemed to have done enough to go ahead on the break.

The Red Warriors begged to differ as they found themselves level again. Mark Lerion’s audacious attempt may have struck the bar, but the rebound fell kindly for Khyndale Manzo who blasted it past the helpless Oracion two minutes before the break. It meant that both teams went to halftime tied at one goal each.

In the opening stages of the second half, Ateneo was eager to go back ahead. Their determination showed with the way they dictated the game’s proceedings. They created the first good chance of the half courtesy of Gayoso. The former Ateneo High School wunderkind got the ball from a Paolo Alilam cross but he couldn’t guide it on target.

On the other end, Oracion had to use his reflexes in making sure that Diano’s free kick did not bounce wickedly into his net. That move proved to be vital for the Blue Eagles, whose hard work paid off two minutes after the hour mark. Gayoso penetrated inside the UE box before squaring the ball to Roxas who had the luxury of tapping the ball into the net.

Relieved, Ateneo decided to sag a bit on defense. It was a move that almost cost them their second lead of the game. Diano’s free kick at the 66th minute was met by Galaura inside the box. Able to shoot, last season’s highest scoring Red Warrior hit the frame of the goal. Unlike in the first half though, the Blue Eagles cleared the ball away before any UE player got onto it.

Approaching the final 20 minutes of the game, Gayoso took over for the Blue Eagles. The rookie unsuccessfully tried to shoot twice while also setting up teammate Roxas, who didn’t get to strike it enough past Clores.

On their part, UE made moves to score another equalizer. With 11 minutes to go, Diano got his head to Opeña’s free kick but the first year striker directed it off target. As time expired, the young Ateneo defense held firm to secure.

“Kailangan talaga namin is to win, pero kung sa performance lang, hindi ako masyadong satisfied sa defense. May mga lapses kami sa marking,” Ateneo Coach JP Merida expressed. Thankful with the win, Merida is hoping the boys will finally use it as a springboard for more victories, especially now that the Ateneans are out of the playoff places. As it stands, the Ateneo Blue Eagles are in fifth place with nine points coming from three first round wins. They trail FEU and UP by two points, with the Maroons yet to play their last first round game. Meanwhile, the UE Red Warriors remain at the foot of the table with a point earned after seven games.