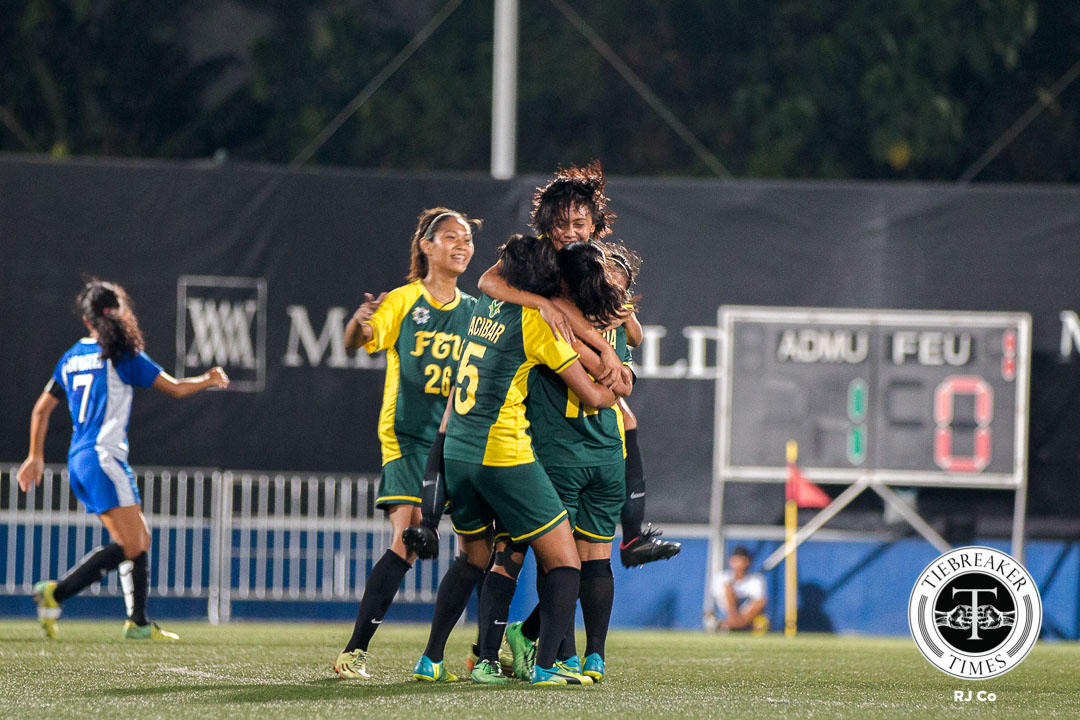 Most of the time, players and coaches will always say the words “bounce back” after a loss. Those two words are easy to utter, but so difficult to pull off at the collegiate levels. With just five teams and only four games per round, a third loss this early in the season could prove fatal in terms of a finals appearance in the UAAP Season 78 Women’s Football Tournament.

At the end of the ninety minutes, it was FEU who had showed more guile to take all three points in their match at the McKinley Hill Stadium in Taguig and cap off the first round. FEU relied on goals from Jovelle Sudaria (35′) and Marie Lacera (70′) to clinch the game despite Ateneo having scored earlier via Cam Rodriguez (20′).

There were signs as early in the first half that the Lady Tamaraws were desperate to clinch all three points. FEU had started the match more aggressively than Ateneo but the latter’s defense held. Nonetheless, the Lady Eagles then started to impose themselves when Bea Velasco had an attempt inside the Lady Tamaraws’ box which went over the bar. After that moment it seemed like Ateneo woke up from their slumber.

Twenty minutes into the game, the Lady Eagles deservedly drew first blood. A Julia Sucgang pass caught the FEU defense out, and all it took was a calm finish from Rodriguez to put the ball beyond Lady Tamaraws goalie Kim Parina. Parina was made to work again few minutes later when she denied Paulina Naguiat.

The Lady Tamaraws, though, didn’t allow their heads to drop after they conceded and responded positively to the setback. They forced two routine saves from Ateneo goalie Mariane Caparros, who had been substituted into the match after Kitkat Montelibano had gotten injured in a collision. Caparros, unfortunately, committed a huge goalkeeping error. Sudaria had a free kick in the 35th minute which should have been an easy catch for Caparras, but the latter failed to handle the ball properly and fumbled it into the net.

It was an awful goal to concede for Ateneo, although the Lady Eagles were still able to conjure one more opportunity before halftime. Rodriguez was played through towards the FEU goal but the awkward angle forced her to shoot over. At the opposite end, FEU pushed for a second goal, but Caparros and a lack of finishing prevented them from doing do. The scores were level, 1-1, at halftime.

If both teams were on equal footing possession-wise in the first half, then the same couldn’t be said for the second, as the Lady Tamaraws had more of the ball. FEU forced Ateneo to concede a free kick after a Kimberlee Jimenez handball, but Jean Kadil shot the dead ball over.

FEU constantly bombarded the Ateneo goal. Lady Tamaraws striker Barbie Sobredo had the ball in a dangerous position after some intricate play but she failed to capitalize. Sudaria had another free kick which was then parried away by Caparros. Another free kick from Sudaria ended up as a clearance from the Lady Eagles’ defense.

That’s not to say, though, that FEU were so dominant. Ateneo, too, had their moments when they threatened FEU’s goal. Sudaria lost the ball centrally from the halfway line and it became a race between her and Rodriguez, but the danger was fended off by the Lady Tamaraws’ defense. Rodriguez, again, became the source of the Lady Eagles’ attack when she broke off from her marker and played Nona Amoncio on, but the latter’s cross was met by no one from Ateneo.

In spite of those attempts for Ateneo, FEU finally got the goal they needed at the 70th minute, when Lecera latched on a through ball and clinically finished to put the ball at the back of the Ateneo net. It would prove to be the knockout blow for the Lady Eagles, as they lost all poise afterwards and committed mistakes because of frustration, while the Lady Tamaraws held on as deserving winners of the match.

The result left FEU level on points with the University of the Philippines at the end of the first round, with 6, while Ateneo are tied with the University of Santo Tomas with 3. It was a welcome outcome for the Lady Tamaraws as they recovered after their poor start. The same can’t be said of the Lady Eagles, however, after they lost their third game already this season.