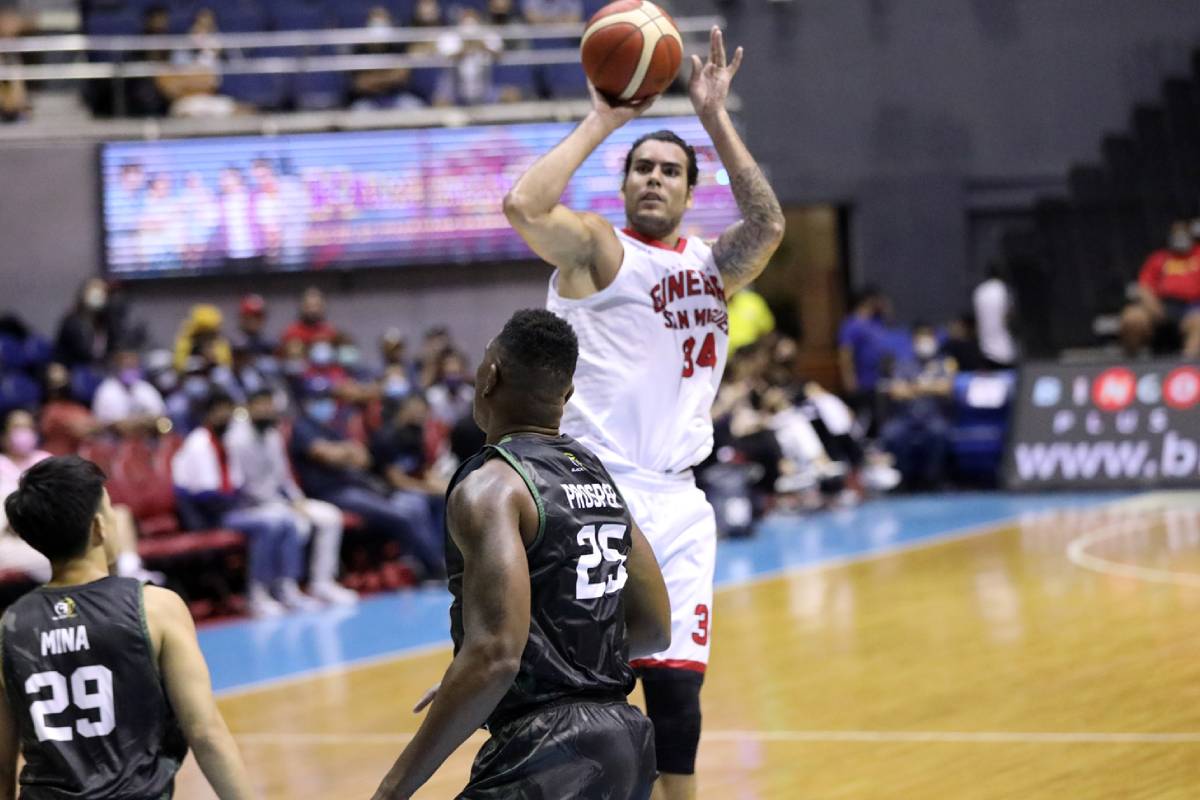 Christian Standhardinger did not see action in Ginebra’s PBA Commissioner’s Cup duel versus San Miguel Beer on Sunday night due to knee problems.

Coach Tim Cone bared that the Kings only knew of the former BPC’s unavailability the morning of the match which they eventually won, 97-96, behind their signature comeback ethos that saw them rise from 19 down.

Standhardinger did join the Barangay courtside at the SMART Araneta Coliseum, but was in street clothes and was seen limping.

“I saw him in practice. He clutched on his knee during one of our drills and his group left the court and he came back on the court the next rotation and so … I just kind of dismissed it because he came out and played again,” Cone said.

“But, he was complaining to the trainers after the practice that it was bothering him. And then he woke up this morning, and he almost couldn’t get out of bed. He couldn’t put pressure on his leg to get up and stand up.”

Cone admitted that it was difficult not having the 33-year-old bruiser, which was evident when the Kings fell behind big during the third canto.

“We had no opportunity to adjust or work on it in practice. We had guys playing out of position,” he said. “We had our guys all mixed up. It was hard to get any execution done and so there was not a flow or good feel.”

Ginebra, however, found a way to address the hole left by Standhardinger and that was through their vaunted defense, giving themselves a chance to claw back and make it a ball game come the final moments.

Plus, of course, the aid of the partisan crowd that trooped to the Big Dome, which the league’s winningest mentor thanked for as well.

“What happened was the defense picked up, we didn’t have to run the offense anymore because the defense was creating our offense,” said Cone, whose side forced SMB to 19 turnovers and turned it to 23 points.

There remains no timetable nor an assessment of Standhardinger’s injury but Cone has his fingers crossed that he’ll be all fine once the Barangay returns to action from its break for the FIBA World Cup 2023 Asian Qualifiers.

Similar to fellow powerhouses TNT and San Miguel, the Kings will be away for nearly two weeks for national team duties overseas later this week.

“One thing I did say to him is we do have two weeks now that he’s going to get done. I don’t know if it’s long-term or short-term, but at least we have two weeks to evaluate and try to fix it and get him back ready for the next game,” he said.

“Hopefully, it’s only a one-game miss. But, you’ll never know. You never know until you get that MRI, you see what’s going on in there.”

Standhardinger has been averaging 11.5 points on 61.5-percent shooting, 7.2 rebounds, and 1.7 assists in the ongoing mid-season conference.