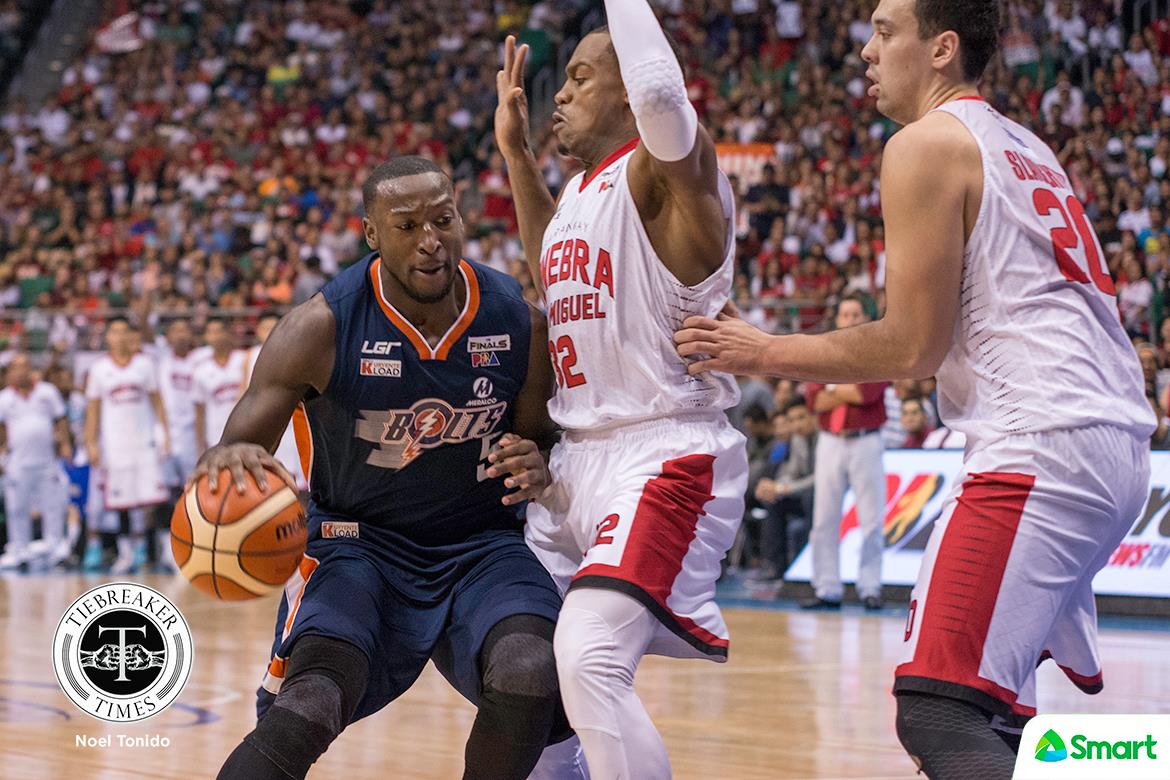 It’s been said many times that Allen Durham came back to the Philippines with one mission: to help the Meralco Bolts get back at last year”s tormentors Barangay Ginebra San Miguel, and win the franchise’s first-ever PBA crown.

Now, as the 2017 Governors’ Cup Finals has been sent to the edge after the Orangemen forced a decider in Game Six on Wednesday night, the reigning two-time Best Import is just 48 minutes away from accomplishing that.

“That’s why I came back,” said the 29-year-old after Meralco’s 98-91 victory at the Philippine Arena in Bulacan, where he finished with 28 points and 19 rebounds.

“I’m excited to still be playing. You know, they didn’t end it tonight.

“[But] the work’s not yet over,” he was quick to add, “Coach [Norman Black] said that although we played a good game, the job’s not done yet.”

There were some points in Game Six where the Barangay had been on pace to repeat what they had done in last year’s edition. The Gin Kings wiped out a 20-point deficit and knocked within four, 90-86, in the bout’s closing minutes.

But then the Bolts, as per Durham’s advice, displayed utmost composure and did not let the ghost of the past visit and hound their side.

“I just told the guys to stay composed,” said Durham, “We had the lead the whole game. I told them to stay composed, we still had control of the game. And we knew they were gonna make a run after halftime and that’s what happened.

“Our guys just stuck with it (strategy) and we came out with the win,” added the versatile six-foot-five forward.

Durham also tipped his hat to the locals around him such as Reynel Hugnatan, Chris Newsome, and Garvo Lanete, for the support they gave, which greatly lessened the load he has been, carrying especially on offense.

#ReadMore  Kuku parts way with Omega, to focus on T1

“They played well, they shot well. We were a different team. We’re a really good team when everybody shows up,” lauded the Michigan-native. “And that’s what happened tonight.

“I’m really proud of the guys tonight. They played well.”

There is no better end to a season than having two rivals go at it in a Finals’ Game Seven. And for Durham, he hopes that the same Meralco team in Game Six will show up come the ultimate match on Friday.

‘We’re gonna come out just as strong like we did tonight: Getting stops, running up early,” said the former NBA D-League campaigner, “But we got to play it for 48 minutes. After 48 minutes, we’re gonna be PBA champs.

“And after that, we’re gonna talk about how happy we are and all that stuff.”