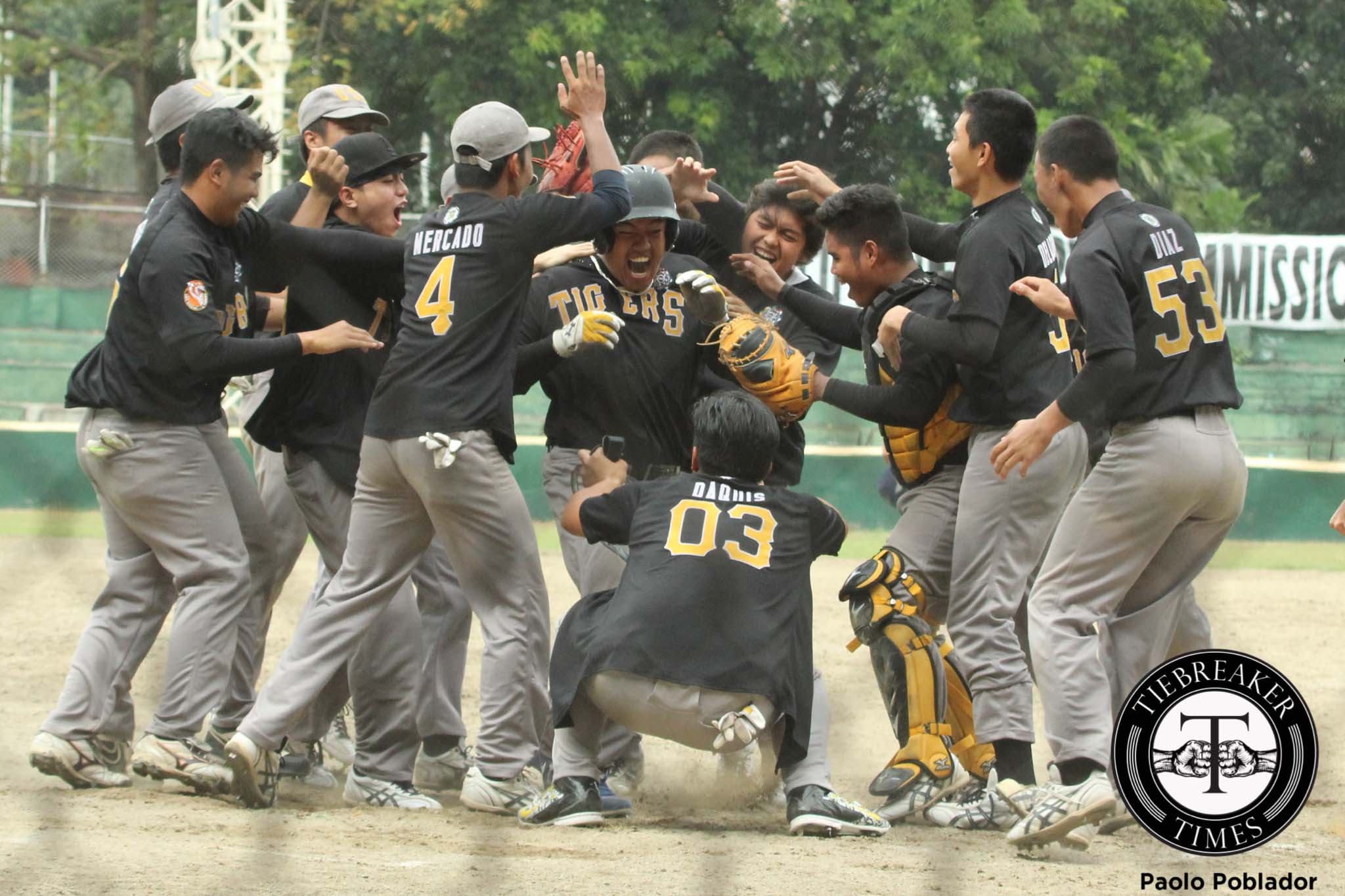 Up until the final inning, the University of Santo Tomas Golden Sox and the National University Bulldogs figured in a see-saw affair that saw both teams clawing for the lead.

With the game on the line, the Golden Sox relied on an old dog to keep their podium finish hopes alive, as team captain Arcel Aligno slammed a huge three-run homer in the ninth inning that sent the Bulldogs to a four-game losing streak, 8-6, Sunday morning at the historic Rizal Memorial Baseball stadium.

Both teams displayed excellent fielding in the first three innings of this contest, with the Golden Sox and the Bulldogs able to hold runners in prime scoring positions to keep the game scoreless. Looking to break their losing streak, the Bulldogs defensive stand was highlighted by a huge double play that knocked off Alwyn Calbang at third base with a flyout, and a slick throw to second baseman Jerome Tenorio for the tag out of Kirk Daquis to close out a third of the game.

National University’s defense, though, was the first to blink, giving the Golden Sox the lead in the fourth inning. Arcel Aligno opened the inning with a single and, later on, moved to third base after a passed ball. With the ouster of the next batter, Jayrome Kimilat was walked due to balls after a full count to give UST the corners. After coach Saki Bacarisas called his defense to play home plate, a hit by Max Mercado led to an overthrow by shortstop Julius Mondragon that gave Aligno a run. A line drive single by Julius Diaz then brought home Kimilat and Mercado to cap the rally and give UST a 3-0 lead.

UST starting pitcher Lesmar Ventura gave up his first clean hit of the game during the fifth inning. After a flyout and a strikeout of the first two batters, Ventura walked Julius Mondragon after a full count. Rookie catcher Cyruz Barit then connected with a huge two-out triple to center-right field that brought home Mondragon to cut the deficit to just two runs.

Both teams held each other run-less in the next; the UST infield anchored their defense, while the Bulldogs pitcher Santos held his own on the other end. Going into the bottom of the eighth inning though, Ventura, pitching on fumes, gave way that led to the trademark National U late-game rally.

After a groundout of the first batter, center fielder Junmar Diarao and third baseman Clarence Caasalan connected with back-to-back base hits that forced Santiago to retire Ventura on the mound for rookie Christian dela Cruz. A fielders choice attempt by the UST defense then paved the way for a Diarao run and substitute first baseman Felix Custodio to gain base. After striking out the next batter for the second out, rookie Maiko Sugimoto popped a huge double to center field that brought home Caasalan and Custodio.

Tenorio was then walked by dela Cruz that forced UST to their third pitching change of the game with Max Mercado taking over the mound. Mercado though hit Herxel Fortunato with a stray pitch that loaded the bases for NU. A single by Mondragon brought Sugimoto home to cap the rally as Barit flied out to first base to end the inning.

#ReadMore  Danny Kingad on DJ’s speed: ‘You have to experience it yourself’

Down three runs entering the final inning, Santiago huddled his troops with a pep talk and give confidence to a down squad. It proved to be effective as the Golden Sox found confidence in their batting that led to a hijack of the game.

Max Mercado opened the inning with a huge double while Diaz followed it up with a single. Both runners were able to steal prime real estate afterwards. With Daquis striking out in the next possession for first out, Christian Mercado was able to bring home Max with a pop-up fly followed by a sacrifice grounder by Marlon Gonzales that punched in two runs. The infield defense of the Bulldogs then caved in that resulted to a throwing error by second baseman Tenorio and first base for Alwyn Calbang. With the game on the line, team captain Arcel Aligno, with all his might, connected with a thunderous swing to left field. The ball, as it flew through the air, thinned the foul line with left fielder Herxel Fortunato running as fast as he could to follow the comet. But the ball landed right in the first row of bleachers, much to the surprise of Aligno, for a three-run home run and a two-run lead. Kirk Peralta grounded out to first base to stop the NU bleeding afterwards.

All the pressure then fell on the young shoulders of UST’s fourth pitcher rookie Jackson Acuna to seal the game. A flyout of Diarao to centerfield opened the bottom end of the final inning but back-to-back singles by Caasalan and pinch hitter Aprix Santos gave life to the NU clubhouse. However, the “fireman” Acuna calmly struckout Kenneth Ybanez while Ericson Villame grounded out to first base for the final out of the ball game.

With the win, the Golden Sox are now tied with NU and Adamson University for third place in the tournament. More importantly for Santiago, it gave confidence to his troops in saying, “yung pangyayari ngayon, yung morale nila tumataas na. Na-realize nila na until the last out, the game is not yet over.”

After a dismal first round, Arcel Aligno played the game of his life, going 4 of 4 at bat. He had two singles, a double, and the game-winning home run that led to two runs and three RBIs. Max Mercado and Julius Diaz complemented the effort with two runs and two RBIs respectively.

The UST Golden Sox face a hungry University of the Philippines squad in a must-win game on Thursday, March 3 in the last game of the day. On the other hand, the NU Bulldogs look to snap their four-game losing streak in facing the De La Salle University Green Batters in the second game of the day.