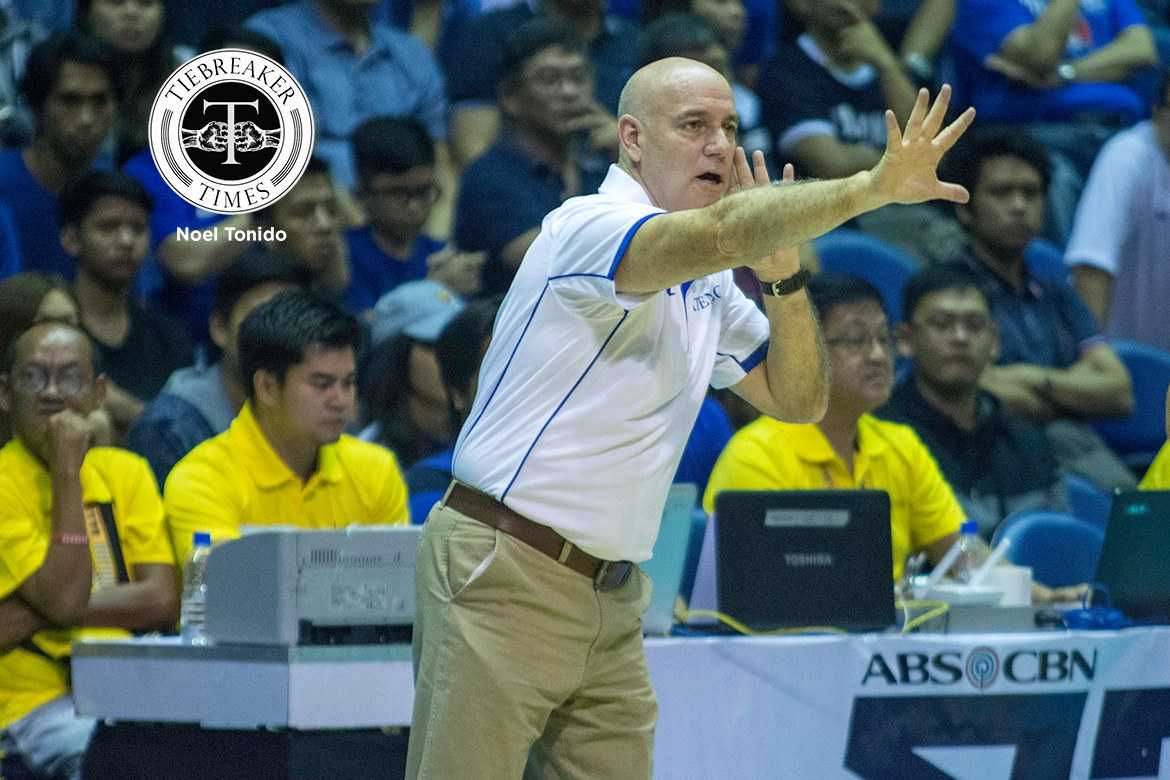 The cagers from Loyola Heights were able to make the right plays in the final frame to open its season with the win at the expense of season-hosts UST.

“I don’t think we started slow. Both teams were a little tentative at first but both teams played extremely hard,” the 58 year old mentor, who was named as part of the team’s staff early this year, shared. “Both teams efforts were exemplary and you have to expect that in the UAAP.”

However, there are a lot of things the Blue Eagles still need to work on according American-Kiwi mentor. Ateneo allowed 23 offensive rebounds in the game that led to 22 second chance points for the Growling Tigers. Moreover, for Baldwin, the 16 assists his team tallied were below his expectations.

“We have a lot of things to improve on. Our rebounding and our positioning were terrible,” Baldwin reflected. “Certainly our defense was solid and we held them down to 30 percent shooting but we need to rebound better than that.”

“Santo Tomas thought that they could not play with us man-to-man and they went to a zone which was a huge mistake. I think that played into our hands even if we shot just 20 percent from the three-point line.”

Beyond the game itself, Baldwin also commented on the rowdy atmosphere the league is known for.

“I would be a lot more impressed if the noise was made by the fans than the drums. I don’t really believe in artificial noise. From my experience, I believe that we have enthusiastic fans and it would be nice to hear them,” he shared.

He lamented the fact that the noise made by the drummers from both sides are interfering with the interactions between players and coaches, resulting to errors.

“When you eliminate that aspect, you introduce a lot more mistakes into the game because the players and the coaches cannot communicate well together.

“I believe it is farcical and I also believe it is unnecessary because you have a number of very enthusiastic fans that would sit up there and make appropriate noise when your team is on a run. When the team struggles, we can see if they will support their team when they are struggling,” he furthered.

The former New Zealand national team head coach is an admitted world traveller and has been involved in the biggest of games with the biggest of stakes. He believes that the noise and the enthusiasm by a live crowd outweighs the noise made artificially.

“I’ve been to stadiums all over the world and I’ve seen crowds that are completely intimidating because of the noise they put on you. But drums don’t intimidate anyone,” he remarked.

“That’s the way it should be. Anything else is artificial and I’m not artificial, I’m kind of a real guy.

“So I like reality, that’s not reality to me,” he closed.