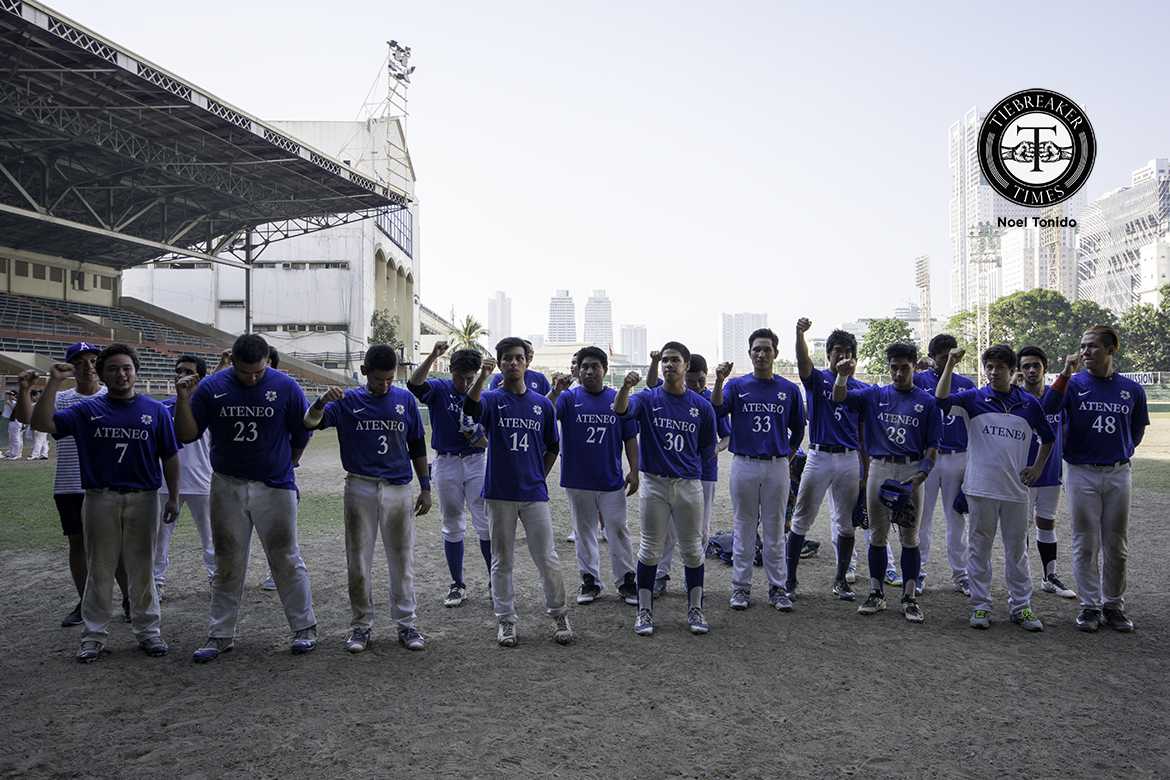 After the dust had settled, the defending champions were able to escape the Green Batters, 19-16, in ten innings to end the elimination round with a school-record 9-1 slate.

Right off the bat, the Green Batters were able to punch in a run in the first inning after a sacrifice fly by Ignacio Escano, against Ateneo’s starting pitcher Marco Mallari, to bring home Diego Lozano. The Blue Eagles were able to get the run back in the next inning after a passed ball led to Chong Ramos gaining home. However, Mallari’s pitches went funky at the bottom end of the second inning as the bases loaded due to balls. Francis Salud then singled to right field to bring in Josh Salinas while a wild pitch brought home Paul Naguit.

The bottom end of the third inning then saw the blue batters erupt for a four run inning. Ateneo had four hits in the inning highlighted by a Tionloc double to right field to bring home Kai Furusawa and Dio Remollo for a 5-3 lead midway through the third inning.

After chipping in a run at the bottom end of the third, the Green Batters took the lead once more at the bottom end of the fifth inning. La Salle was able to tag Ateneo’s third pitcher for the game Diego Lozano four times that led to four runs. Sparking the run was a Franco Hashimoto triple to right field that brought in Naguit and Salinas. La Salle held an 8-5 lead to end the fifth inning.

The two teams continued to exchange runs in the sixth and seventh innings as both teams shuffled their rotations to give exposure to their bench. La Salle’s third pitcher Arvin Herrera was tagged four times that led to four runs for Ateneo. With Kai Furusawa at bat, the Green Batters decided to walk the slugger. However, right when Minana was about to commit the fourth ball, Furasawa connected with a long line drive at center-left field to bring home three runners to tie the game. On the other end, Kouichi Igarashi, Ateneo’s second reliever, could not find the strike zone that led to three runs as well.

Rookie Carlos Minana then replaced Herrera at the top of the eighth inning. The La Salle infield committed three costly errors and two hits. This resulted to four runs for the Blue Eagles to gain the lead 13-12 entering the bottom end of the 8th inning. With the bases loaded and two outs, the Green Batters were able to tie the game after closer Paulo Macasaet hit Cholo Dominguez by a pitch to bring home Salud.

The Blue Eagles blasted three more runs at the top of the final inning of regulation that gave Ateneo cushion. An error by Josh Salinas paved the way for a Johnny Altomonte run. Later on, with Javi Macasaet at third base, assistant coach Boc Bernardo signalled for the rookie to steal home base. He succsessfully did so to punch in another run. Enzo Orbeta then singled to right field to bring home Marquis Alindogan to cap the Ateneo rally.

Needing two more runs, the Green Batters did not go down easily with a huge two-out rally to send the game into an extra inning. A Diego Lozano single drove in Miguel Olmos. Boo Barandiaran then doubled to center field to bring home two runners to tie the game.

In the extra inning, the Ateneo batters quickly loaded the bases with one out. Ryan Hilario then singled to left field to bring home Furusawa and Dino Altomonte. Minana had to be retired from the mound for Carlos Munoz to close-out the inning. Munoz walked the next two batters to bring home Johnny Altomonte to give Ateneo a three run lead.

Paulo Macasaet and the Ateneo defense grounded out the first two La Salle batters at the bottom end of the inning. However, Macasaet hit Joaqui Bilbao with a pitch that almost instigated a fight between the two. Cooler heads prevailed though and a throwing error by catcher Dino Altomonte gave the Taft-based squad two bases. A flyball though by Palacios to right field ended the five hour, 17 minute game.

Designated hitter Kai Furusawa was 5 for 7 at-bat that led to two runs and three RBIs. Javi Macasaet was 3 for 5 and was able to punch in four runs.

With the win, the Ateneo Blue Eagles finished the elimination round with a 9-1 record. Moreover, they will have the home team advantage for their Finals series against La Salle that starts on Friday, March 11 at 12:00nn.