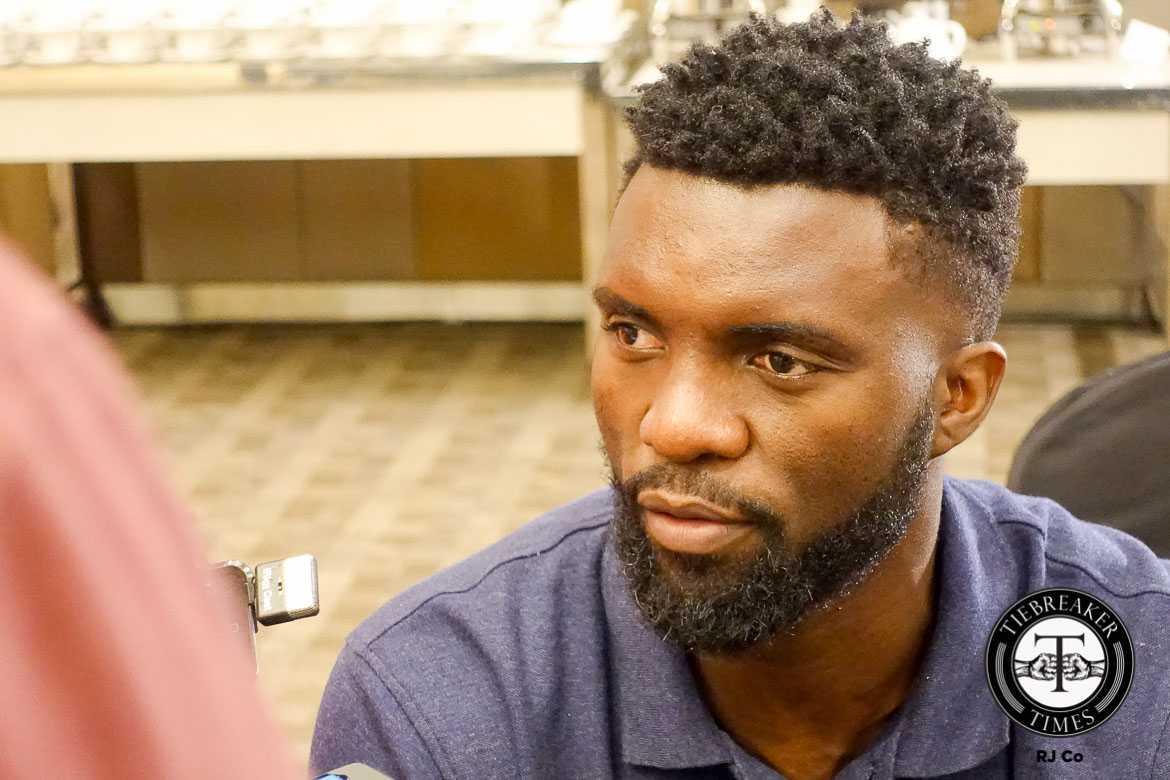 The Cameroonian center was at his articulate best when he talked about NU’s upcoming journey through UAAP Season 79.
“As far as I’m concerned, our biggest opponent is NU. We just need to push a little bit more,” Aroga told Tiebreaker Times.

After having won it all in Season 77, the Bulldogs squeezed into the Season 78 Final Four where they were bounced by the top-seeded University of Santo Tomas Tigers.

With several new pieces coming in, and as the only remnant of the Season 77 starting remaining on the roster, expectations are sky-high for Aroga to carry the Bulldogs. But Aroga scoffed at the notion of needing to put his team on his broad back.

“Expect really nothing,” Aroga answered when asked what people should expect of +him. “My goal is to accept the change in the team. We have a lot of rookies and I need to accept that I can’t do this alone.”

“To trust the process, I need to fit into the system and do my job. I’ll just come into this fearless and do what I have to do.”

“The biggest difference is we’re a running team (this year). The past couple of years, we were more defensive. This year we have new weapons – we have scorers. That’s going to make a big difference. Plus, we run a lot and we still play that defense,” he continued.

Season 79 will see the debut of five new head coaches on different teams. With their sweep of the FilOil Premiere Cup, the De La Salle University have been tagged as favorites while the University of the East, defending champions Far Eastern University, and Adamson University are predicted to make a splash.

People are sleeping on the Bulldogs and Aroga doesn’t mind if they continue to snooze.

The Season 77 Finals MVP knows that championships aren’t decided by the number of stories written about them or the hype they generate. NU have never been the favorites and Aroga never listens to the off-court chatter.

“As far as I’m concerned, I don’t really mind what people say. I focus on my own play. I don’t like focusing on other people’s play. It doesn’t matter,” Aroga expressed.

“If people are sleeping on us, it doesn’t really matter. We’re just focusing on what we have to do to get that bacon,” Aroga concluded.