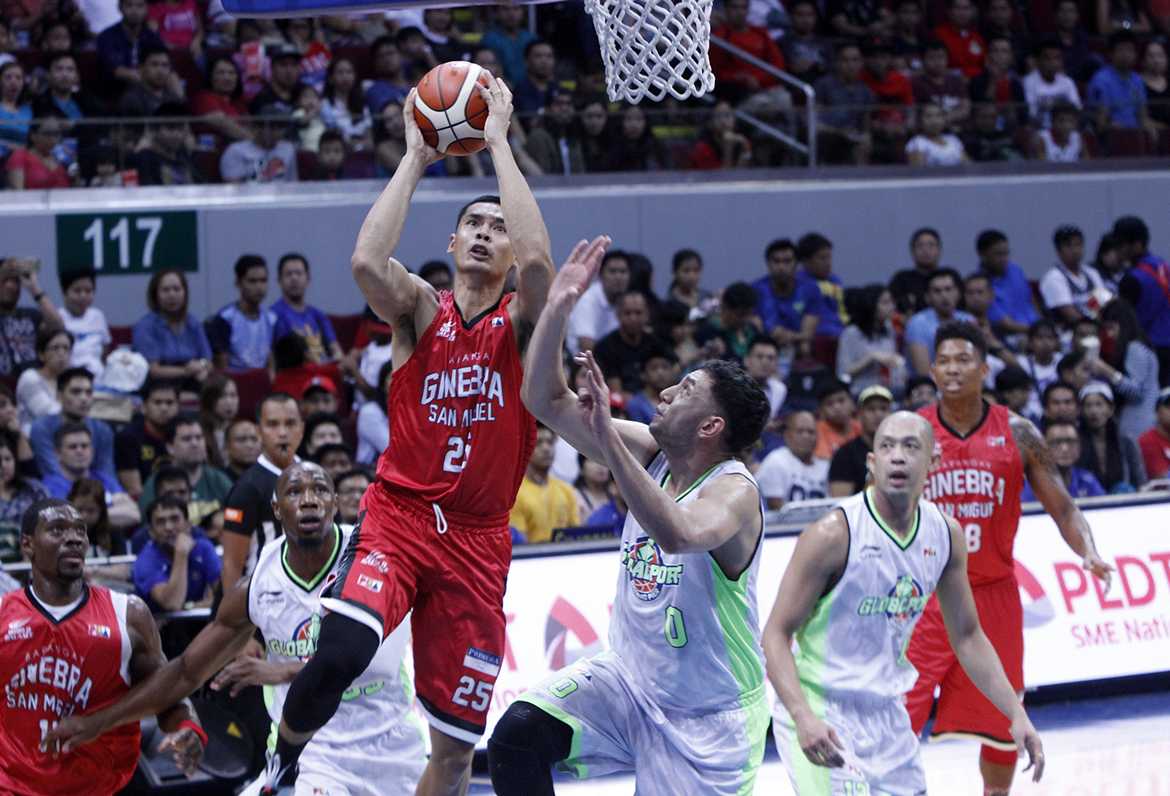 The Barangay Ginebra San Miguel bucked a slow start, playing without their import in the final frame, to eventually come out with a 93-81 victory over the GlobalPort Batang Pier at the SM Mall of Asia Arena, Saturday evening.

Japeth Aguilar led Ginebra with 21 points on 8-for-11 shooting from the floor, and six rebounds.

“I tried to be patient. Sabi ni coach Tim [Cone] na just let the offense come through you so defense muna,” Aguilar said. “Nung nakikita ko may mga open shots, when I took it, I felt good so nag-tuloy tuloy na.”

Withstanding a slow start by their starters, Ginebra erased a 14-point lead established by the hot shooting of Joseph Yeo and Stanley Pringle in the opening frame. The bench mob of the Kings, led by the troika of Japeth Aguilar, Mark Caguioa, and Sol Mercado, ignited Ginebra’s run as a 9-0 run in the middle of the quarter gave them a 34-30 lead.

On the other hand, Terrence Romeo aided Yeo and Pringle’s production as the national team star played an efficient half, featuring two quarter buzzer-beating jump shots. At the break, his squad took a two-point lead at 46-44.

A frantic second half featured multiple lead changes in a defensive-themed exchange. Ginebra completed a small run fuelled by a six-point turnaround in the middle of the third period behind their running game.

In the latter part of the third canto, Paul Harris unfortunately collided with players in a defensive joust that broke his right thumb. He immediately rushed to the dugout and would not return to the match.

“We don’t play until Sunday(next week) so let’s see what happens with Paul,” said Ginebra head coach Tim Cone. “Hopefully we work together and these injuries are those things that build character. We’ll keep battling to overcome it.”

Ginebra had a 62-61 lead entering the final quarter, as Japeth Aguilar made key baskets late in the third period. With GlobalPort import Dominique Sutton struggling in the collapsing defense, the small line up of the Kings took charge offensively. Three straight layups by the Kings opened a 69-62 lead with nine minutes left in the match.

The wave of momentum carried over for the Ginebra side, with from successive baskets that gave them the lead the rest of the way. A resurgent Chris Ellis and an aggressive Sol Mercado poured in multiple points by attacking the rim. Ginebra’s all-Filipino lineup erected an 83-74 lead with 4:00 to go. Pringle and Sutton countered with four straight on the other side but failed to inch closer, as Ginebra were able to secure the win.

“We really fought tonight. It seemed tonight that we played that never-say-die spirit,” Cone added.

Ginebra played without their ace big man Greg Slaughter, as he needed a surgery for his ankle injury. Even without the services of Slaughter, the rest of Ginebra stepped up, as they won the interior scoring 50-30, and also grabbed more rebounds, 58-49.

#ReadMore  Cone sees Jawo's tenacity on the boards with Thompson