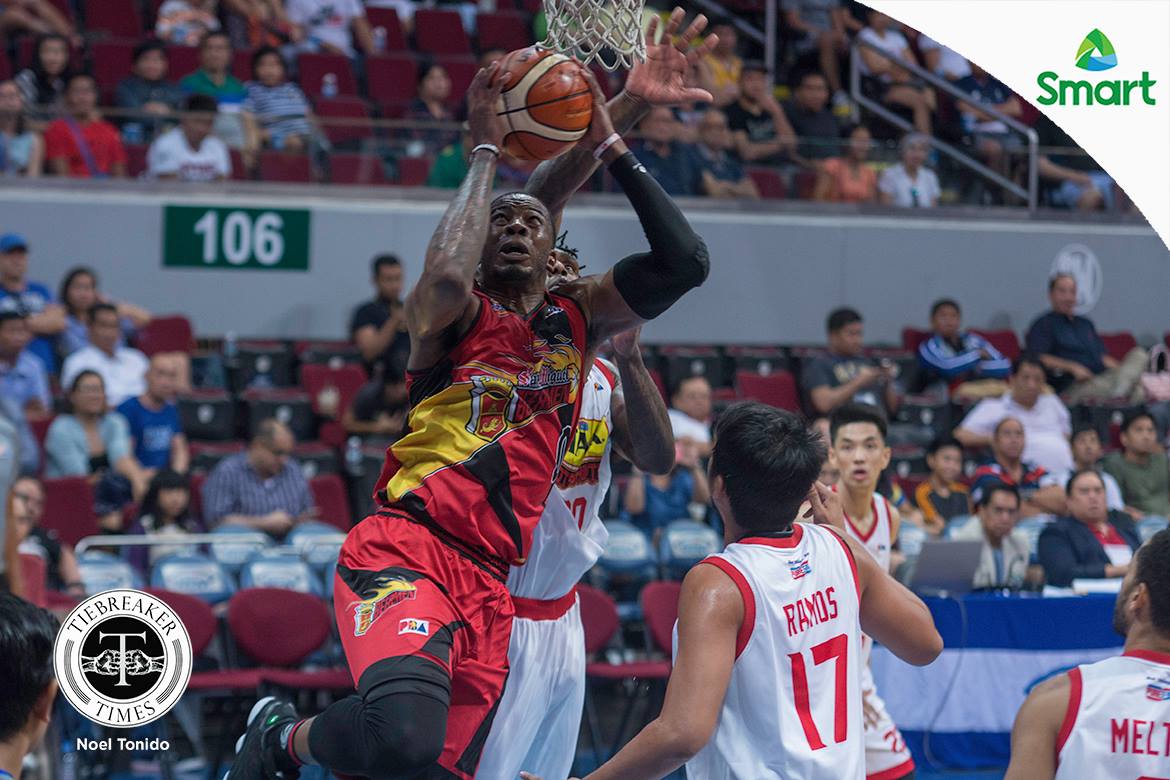 The Star Hotshots thought that the magic of Game One would happen again, but they were wrong.

The San Miguel Beermen survived an inspired second half rally by the Hotshots to escape with a narrow, 77-76 victory and tie their best-of-five semifinal series at a game apiece, Monday night at the SM Mall of Asia Arena.

All of San Miguel’s starters finished with double-digit outputs in the victory, with Charles Rhodes top-billing with 21 points and 10 rebounds. Alex Cabagnot had 13, while June Mar Fajardo was a rebound shy of a double-double with 12 and nine.

“Kahit one-point yan, tatanggapin ko ng buong-buo,” said a relieved SMB head coach Leo Austria as they have finally leveled the series. “[These are] the kind of games we’re expecting. I know what Star is thinking right now. Before the game, they want to win, to bring us down to 0-2 dahil it’s in the best-of-five series.”

The Beermen untied a 74-all knot with a booming Arwind Santos triple to take a three-point lead with 3:45 left to play, but Mark Barroca scored a hoop to move Star behind a point, 77-76, with 43.1 ticks left.

Barroca had a chance to tie the game once more, but he missed his bonus. He made up for it on the defensive end, however, as he stole Fajardo’s cross-court pass to help the Hotshots regain possession with 23 seconds to go.

As in Game One, Star reverted to a Paul Lee-Aldrech Ramos pick-and-pop set. This time, though, the Beermen’s defense did a better job and did not collapse, not giving Ramos the space he needs to make another triple.

Ramos was open in the corner, but Lee took matters into his own hands as he attacked for a floater. He had a good look, until Arwind Santos rose to defend and to change his shot. Lee missed, and SMB were able to grab the ball and secure the needed win.

“We’re lucky that the last shot of Paul Lee did not connect,” said Austria of that end-game sequence. “We have to work really hard on our next game kasi Star is really determined to win. They know our weakness and our strength.

“It’s a chess match eh, and I hope next game magkaroon kami ng momentum in our third game because of this win,” the four-time champion mentor admitted.

Marcio Lassiter and Chris Ross chipped in 11 and 10 markers for San Miguel, respectively.

San Miguel shot 41 percent from the field, but lost the rebounding wars, 58-45. Both teams though turned the ball over 12 times, but the Beermen capitalized on Hotshots’ errors better by converting to 15 points.

Game Three is set on Wednesday, June 14, 7:00 PM at the SMART-Araneta Coliseum.

Victolero has no problems with Lee taking last shot