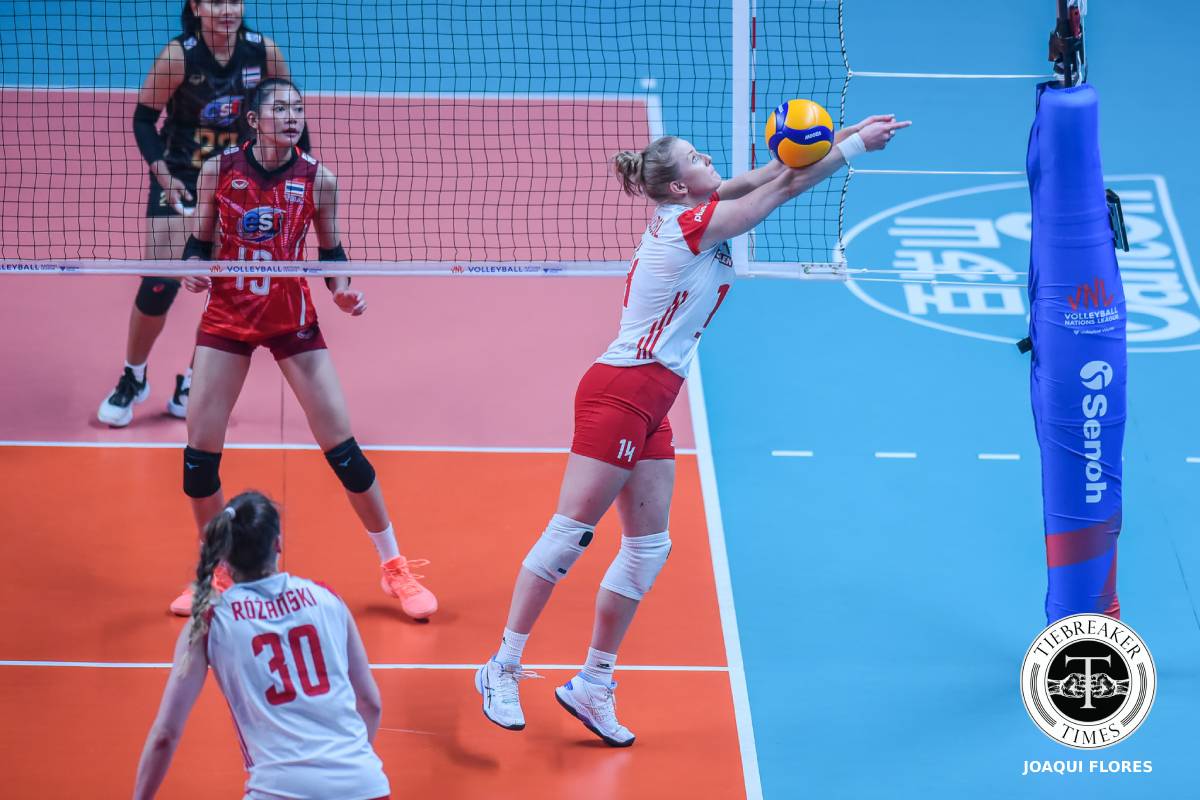 Poland rallied back from two sets down, silencing short-handed Thailand to clinch their fourth win in the FIVB Volleyball Nations League with a 22-25, 27-29, 25-16, 25-16, 15-13 come-from-behind win, Thursday morning at the SMART Araneta Coliseum in Quezon City.

Poland fended off Thailand’s rally that sent the deciding set into a 13-all deadlock, and a service ace from Zuzanna Gorecka and a block from Klaudia Alagierska ended the match in their favor.

Still, the Thais went off for a strong start.

Neither team had control of the match at the start until errors from Poland, mostly coming from attacks, saw Thailand take the first, 25-22.

Thailand then capitalized on the reception problems of Poland in the following set to turn a 7-10 deficit into a 13-10 advantage. Poland got back their bearings, especially on the defensive side, but Thailand bagged the extended second set on an attack from Kongkyot Ajcharaporn, 29-27.

Needing to win the third to extend the match, the European side varied their attacks to confuse Thailand’s defensive pattern and went off with a 9-4 lead early in the said frame. Setter and captain Joanna Wolosz then sent Poland into the technical timeout at 12-8 with a 1-2 play.

“It is a sign that when you’re down, there should be a change of mentality. We started to believe in ourselves and we know that we can do great things,” Olivia Rozanski said on the third set turnaround and the consequent win.

Thailand lost opposite hitter Pimpichaya Kokram in the middle of the set to injury, giving them some problems with offensive options. Poland eventually bagged the third with Klaudia Alagierska’s middle hit ending the set with 25-16.

Poland carried the momentum into the fourth set and built a huge 20-12 advantage mainly on attacks in transition and ultimately forced the fifth and deciding set.

Wolosz orchestrated a balanced attack with Rozanski pacing the side with 20 points off 17 attacks, two blocks, and an ace. Fellow open hitters Martyna Czyrnianska and Weronika Szlagowska added 18 points each.

Chatchu-on Moksri carried the fight for the Thais with 26 points, 20 coming from attacks with five blocks and one ace. Kokram scored 13 markers before sitting out in the third.