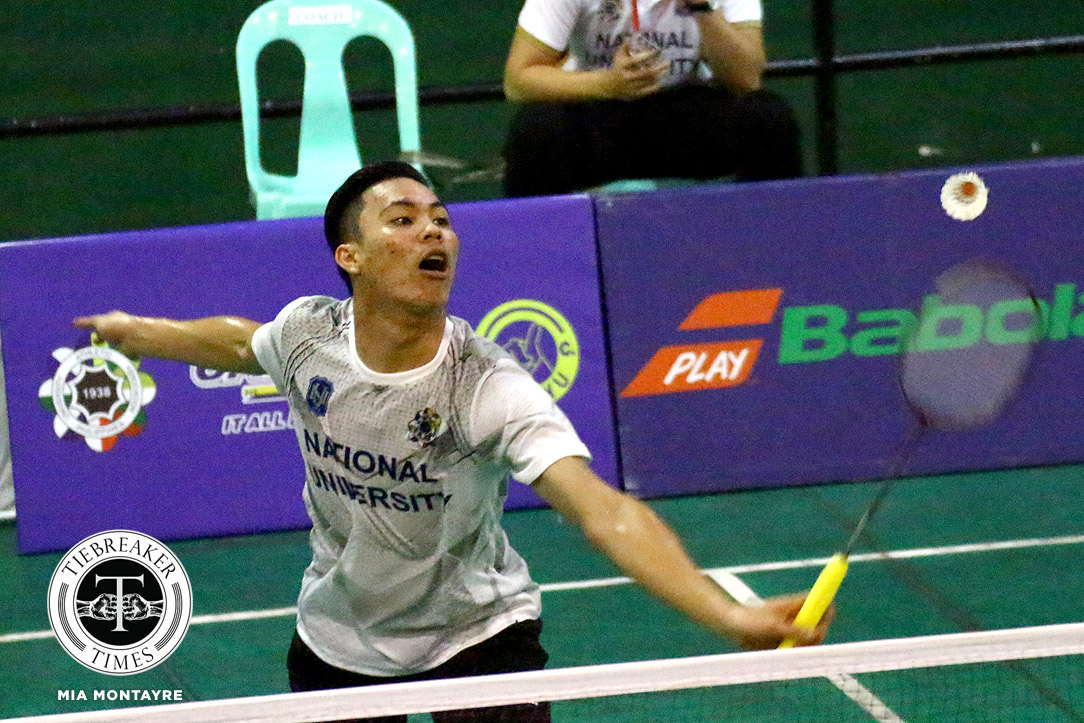 The National University bulldogs extended their winning streak to 38 and the Ateneo de Manila University Blue Eagles bounced back with a hard-fought win as the UAAP 81 men’s badminton tournament continued Sunday morning at the Rizal Memorial Badminton Hall.

The defending four-time champions from Bustillos swept the first three matches to clinch their 38th straight tie, but not without a fight from the Adamson University Soaring Falcons

After getting stunned in the previous day, former Most Valuable Player Ros Pedrosa opened the day with a two-setter past Johnrick Macabenta. Mike Minuluan then had to scrape past Kevin Fabros in two tight sets to take the second singles match.

Nonetheless, the Soaring Falcons would not be swept as Elben Concha swept his outings to end the day on a good note for his squad. The senior Adamson stalwart paired up with Macabenta to stop Mike Minuluan and Dawn Cuyno in the second doubles match in two games, before coming back in the third singles past Cuyno after.

NU continues to sit atop the table with a 3-0 record while dropping Adamson to fifth with a 1-3 slate. 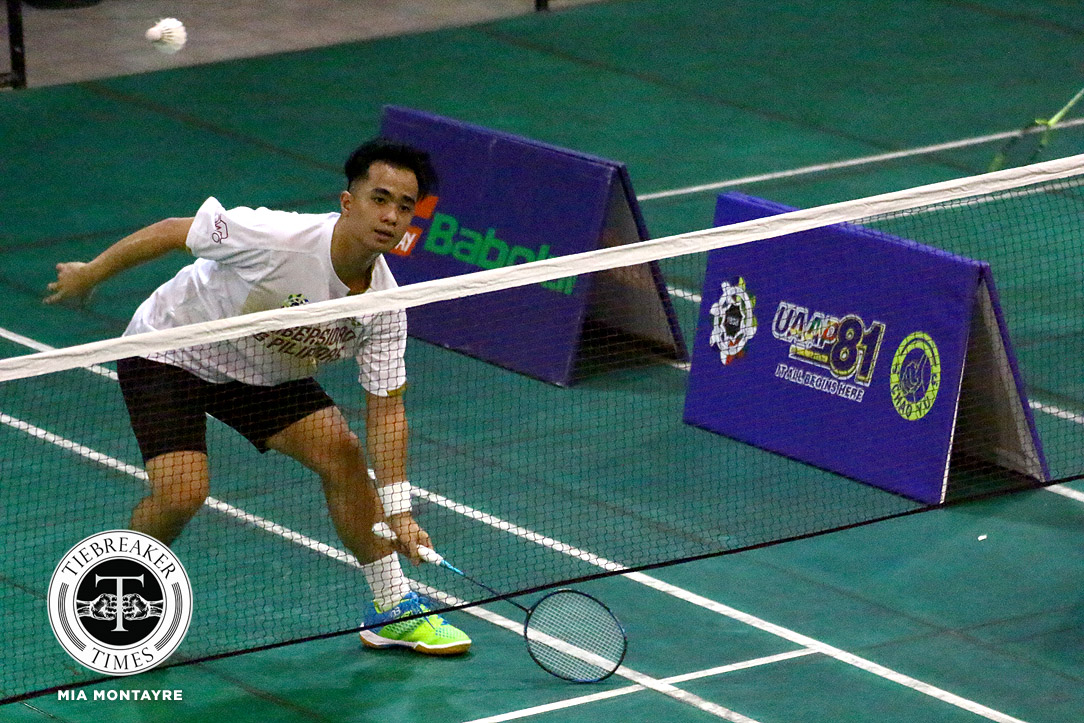 JM Bernardo overwhelmed Edward Adriano in the first singles match with the third-year Maroon opening the match with an 11-0 lead in the first game and never looked back. Rookie Kyle Legaspi followed this up with an impressive win past Christian Garcia.

Michael Clemente took a leave from singles duties and finally claimed his first win of the season after he and former skipper Betong Pineda disposed off Rojan Gamil and Benjamin Silva in the first doubles match.

Team captain Vinci Manuel and newbie Harvey Tungul flexed their muscles past Adriano and Garcia, and last year’s top rookie Jolo Lundo debuted with a win over Gamil to complete the sweep. 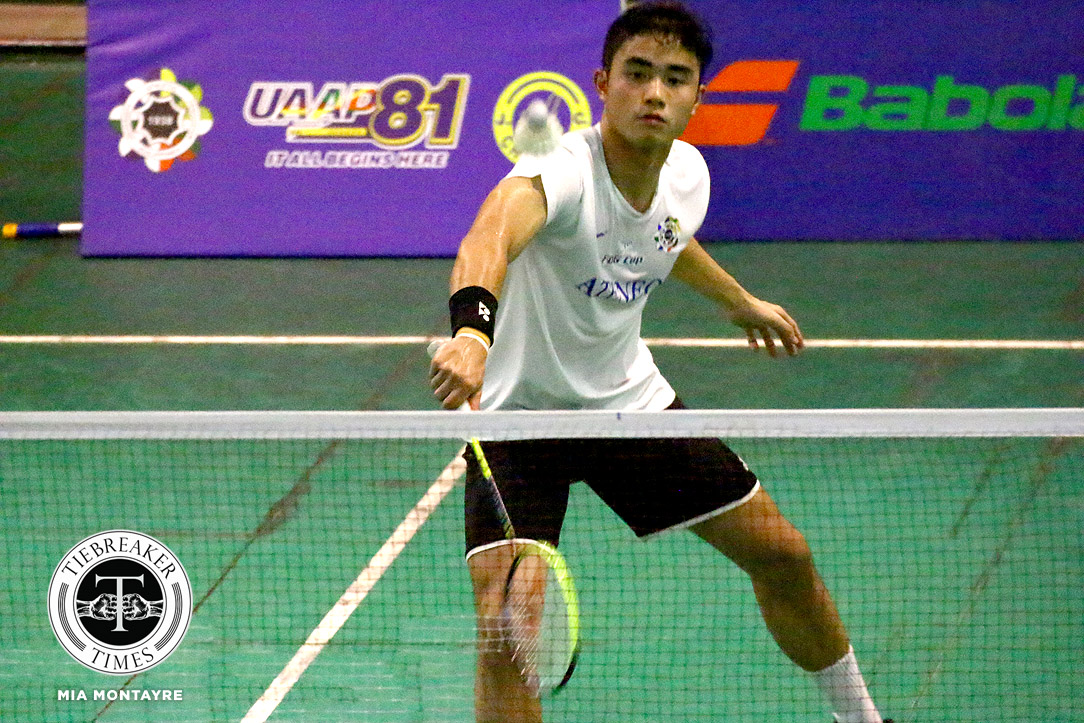 The day, however, belonged to one of the most heated rivalry in collegiate sports as the Blue Eagles and the De La Salle University Green Shuttlers toughed it up in a crucial pairing. The two teams split their first four assignments leading to an all-important singles match.

Fides Bagasbas clinched his first win of the season, stopping Cayel Pajarillo in the opening singles match in three games. The Blue Eagle had to sweep the next two games to carve the win, ending the battle at a rousing 21-9 score line in the decider.

The Green Shuttlers then took the lead with Niel Andrew Pineda pulling an upset of-sorts past Carlo Remo in the second singles. The fourth-year La Sallian is yet to drop a match in the season after he also stunned NU’s Pedrosa Saturday. Following up this victory, Pajarillo made amends as he and Bless Linaban outlasted Bagasbas and Sean Chan in three sets to take the 2-1 lead in the tie.

Remo would not be swept, nonetheless, as he and Asuncion kept Ateneo in the fight after plucking the win in the second doubles match over Pineda and Paolo Malabanan.

With just a few minutes of rest, Asuncion had to battle fatigue and a persistent rookie in Louie Khairial in two hard-fought sets to eventually complete the comeback for the Blue Eagles and seal their second win of the season.

Remo, Ateneo’s captain, shared that the loss against the National U was just part of the learning process. “For that NU tie, we just tried our best. We just checked what our errors were and polished them for our next game.”

The Peru International champ added that the team knew of the importance of every single tie. “It is really important kasi lahat pantay-pantay. Isang mali mo lang pwede kang matalo. So, it is important for us to get this win.”­­­

Ateneo sits at third with a 3-1 record while La Salle is at fourth with a 2-2 slate.