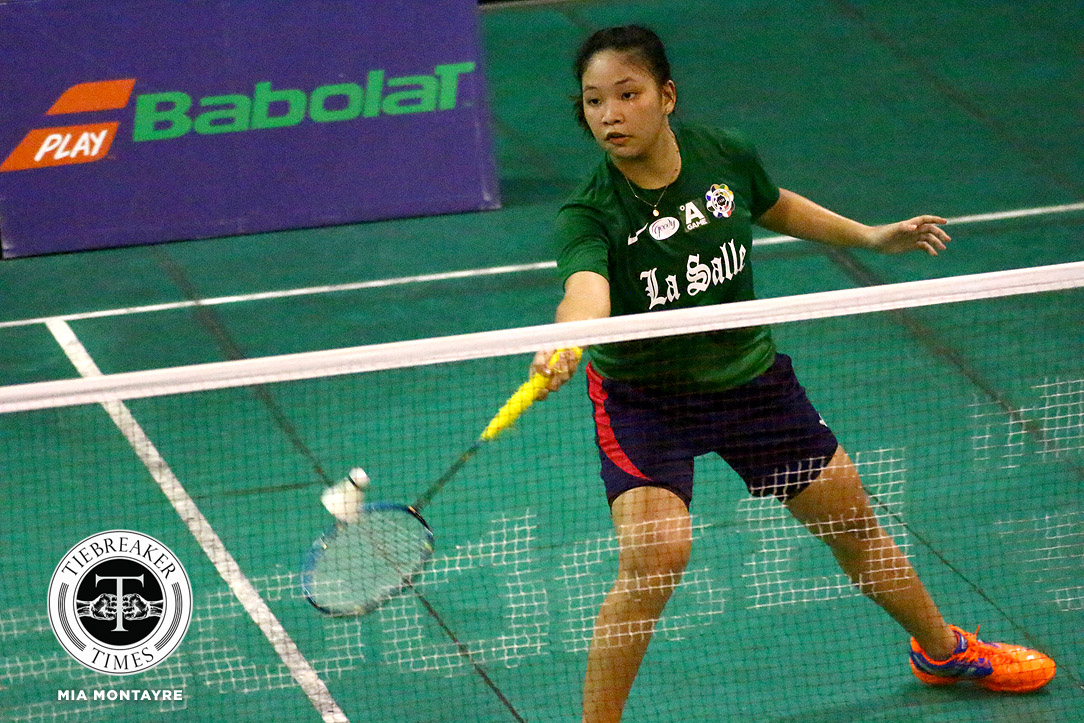 After the reigning champions De La Salle University Lady Shuttlers halted the championship run of the University of the Philippines Lady Maroons last season, it was just fitting that the same squad stopped the latter’s qualification round streak at 31, Tuesday afternoon at the Rizal Memorial Badminton

Nonetheless, the stepladder postseason is not yet out of the picture as the Ateneo de Manila University Lady Eagles remain unscathed after four ties at the close of Day 5.

Reigning Most Valuable Player Nicole Albo was a picture of that killer instinct, taking down batchmate Lea Inlayo in two convincing games, before the top player in the previous year Poca Alcala equalized for the Fighting Maroons, making short work of La Salle rookie Kanna Baba in the second singles match.

Despite trailing at the interval of the second game and with delays due to leaks on the courts from the roof of the venue, the national team standouts pulled the rag off Inlayo and Ann Maranon to put the Lady Shuttlers on top once more at 2-1.

Former Most Valuable Players Alcala and Jessie Francisco, nonetheless, kept UP in the fight, dominating Green and White rookies Baba and Elizabeth Yason in the second doubles match.

However, true to her words, Sevilla overhauled a wide deficit in the first game of the deciding singles match over Maranon, to eventually snag the frame. From there, the La Salle skipper slowly pulled away, overcame the UP co-captain’s mini-run, and ultimately take the win for the reigning queens.

The result puts La Salle and UP both at 3-1.

When asked for her feelings after the win, Sevilla candidly said, “First of all, I’m very tired.” Then the fourth-year La Sallian added, “But I’m happy. We just trusted ourselves that we can win.”

Wins they come, too, for their first round tormentors Ateneo Lady Eagles. The Loyola-based side is on a four-tie romp ahead of another crucial outing against the Maroons on Thursday.

The Lady Eagles sent the Tigresses back to a loss after finishing the latter off in just 10 games.

The duo of De Vera and Chanelle Lunod then showed that they have recovered from respective injuries and sealed the win for the unbeaten Ateneo side, as they dominated Anne Pimentel and Steph Mortera in likewise two sets.

Ramos and Bea Felizardo teamed up in drubbing Tating and Pena in the second doubles, as last year’s top rookie Alyssa Roxas was equally dominant in her win over Mortera.

The National University Lady Bulldogs (3-1) also fashioned out a sweep for the day, denying the hapless University of the East Lady Warriors (0-5) even a game win.

Despite tinkering with its roster, the Lady Bulldogs bounced back with a spectacular sweep with rookie Jeya Pinlac flexing her muscles in her two assignments for the tie.

Jiselle Capillo waylaid Jaylnne Chua in the first singles match, before Pinlac took care of her first contest past UE captain Erycka Labay in two games to put National U at 2-0.

Bulldogs captain Jhayvin Dizon and fellow senior Mitzi Pantoja the made the most of their time on the court, making short work of Deinne Leonardo and Chua in the first doubles match to secure the bounce-back win for the Gold and Blue.

National team ace Sarah Barredo and Pinlac joined forces in the quashing of Labay and Kessara Palot in the second doubles match. Rookie Andria Songcuan then plucked her first-ever UAAP winin her debut past Leonardo.