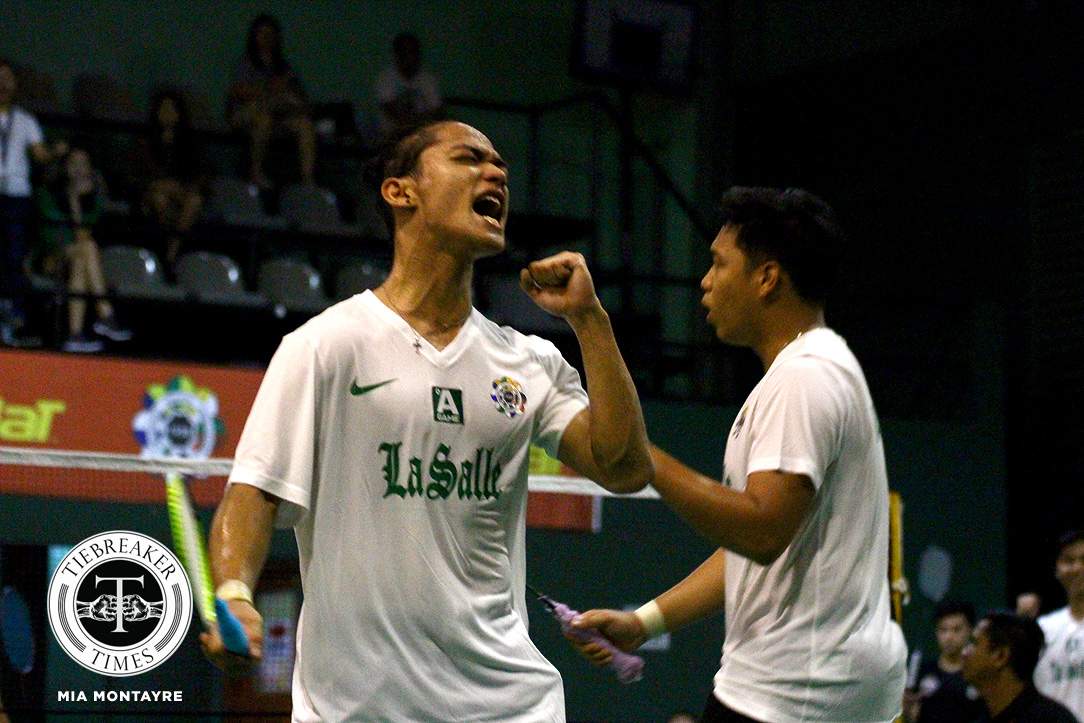 Losing national team stalwarts Anton Cayanan and Kenneth Monterubio to graduation was supposed to be a huge loss for the De La Salle University men’s badminton team. But don’t tell that to the Green Shuttlers.

The De La Salle University Green Shuttlers leaned on their doubles pairs to eventually complete a comeback against the University of Santo Tomas Golden Shuttlers, 3-2, and to take their first win of the season, Thursday morning at the Rizal Memorial Badminton Hall.

The tie was battle royale from the get-go, but it was the side from España who took the first two singles matches. John Edgard Yabut took care of Jerrickson Oba-ob in two games, 21-18, 21-15. Then, John Paul Yabut made it 2-0 for UST, sweeping Andrew Pineda with a gritty 25-23, 25-18 finish.

However, La Salle had other plans.

Oba-ob made amends in the first doubles match, as he and Cayel Pajarillo completed their own comeback. Down a set to Mark Sotea and Reyes, the La Salle duo showed better execution in the next two to keep their squad in the tie. The Green Archers took it at 18-21, 21-17, 21-18.

Monterubio’s brother, Bee, and Pineda then levelled the tie after a dominant finish of Kristian Barrios and Juan Miguel Santiago. The Taft tandem wasted no chance in the second game, after a tight finish in the opening set and won it at 21-19, 21-14.

Pajarillo was not yet done in the day, but Cris Sanchez was there to stop him.

The third-year Thomasian took the initiative in the first game of the deciding singles match, before Pajarillo sneaked out in the end to steal it at 21-19. From there, the La Sallian coasted along, along with his squad’s road to win number 1, ending it at 21-10.

The Green Archers (1-0) will try to do better in their next outing against the Adamson University Soaring Falcons (0-1) on Saturday, September 23, at 1 pm. The Growling Tigers (0-1), meanwhile, will attempt to bounce back against the University of the East Red Warriors (0-1) on the same day.