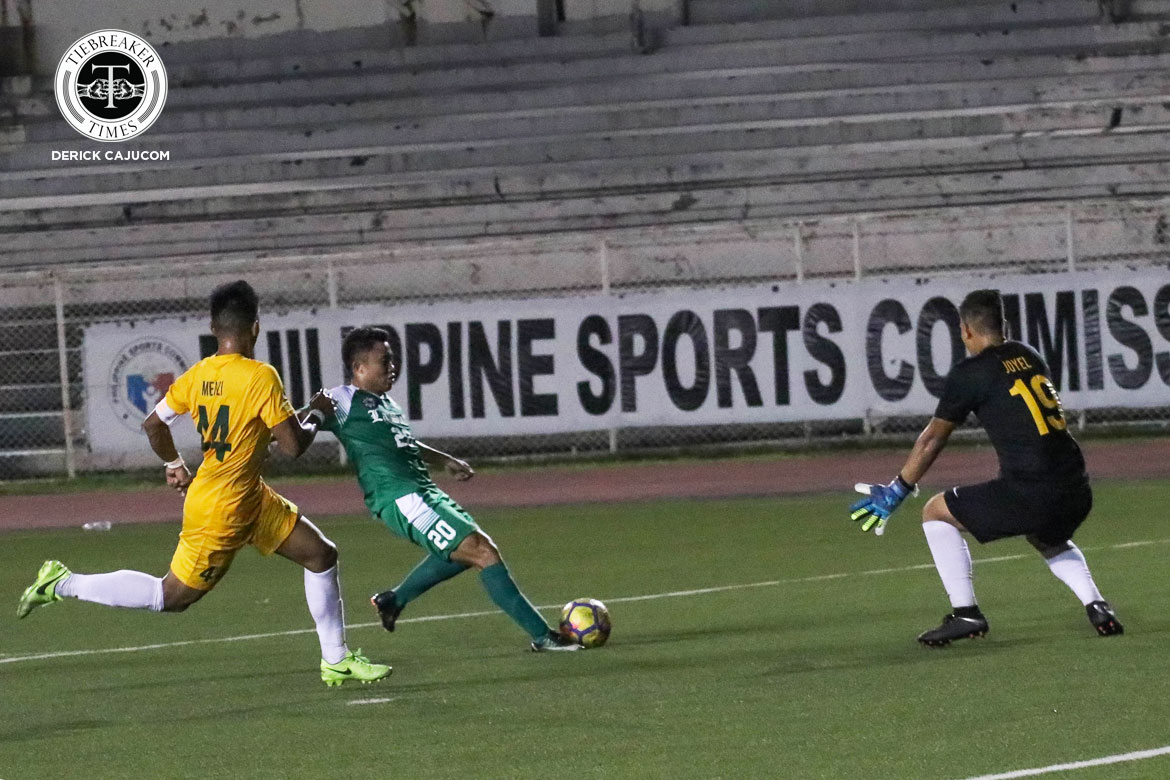 There is always something in the air when the De La Salle University Green Archers and Far Eastern University Tamaraws take each other on in the UAAP Men’s Football Tournament.

Jeremiah Bernaldez’s late goal, Arnel Amita’s red card, and lots of chances were all on show as La Salle prevailed 1-0 over FEU, Sunday night at the Rizal Memorial Stadium in Manila.

La Salle now leapfrog the University of Santo Tomas Golden Booters to third place with 16 points in the Season 80 standings. On the other hand, FEU remain in seventh place with 9 points.

“Like I said in the beginning, all I want to see from my team, from my boys, is that they play with more intensity, never let up. They have to play much better than last year and they’ve shown that. Like I said… they should be able to continue with their efforts non-stop,” said La Salle mentor Hans-Peter Smit. “FEU, no matter what, they’re always a formidable team. They never let up. It’s a good sign. Hopefully that brings up all the way to the next games.”

The Tamaraws suffered an early blow in the game when goalkeeper Dave Parac was injured after a 50/50 collision with Green Archers striker Chris Lawless. Tamaraws star Arnel Amita then replaced Parac, while Ray Joyel took the gloves for FEU.

La Salle rarely threatened to score in the period, and saw their best chance thanks to Mathew Custodio. The sophomore latched onto Lorenzo Perez’s pass and forced a fine save from Joyel. Possession was with the Tamaraws at the end of the half, however, and De Guzman denied two Donggyu Jung free kicks with fine saves.

The Green Archers then almost broke the deadlock once the second half started thanks to Custodio. The La Salle Green Hills alumnus found space in the Tamaraws box, but he failed to hit the target.

It was a similar story at the other end. La Salle failed to deal with a long ball, and Gilbert Mendoza, Jr. received it in a dangerous position. Mendoza attacked the Green Archers defense and shot narrowly wide of the goal.

An open game ensued, and Andes had another big chance to draw first blood for the Tamaraws. Andes outran Green Archers defender Nathan Alcantara and provoked another fine stop from De Guzman.

Both sides had moments to get that first goal. La Salle’s substitute striker Cristian Zubiri’s failed to latch onto passes to him and two chances went begging, while FEU’s Alex Rayos, Jr. capitalized on a defensive miscue only to shoot straight at De Guzman.

With eight minutes left on the clock, Joyel was well out of his line, which Zubiri looked to take advantage of. The 2017 SEA Games stopper, however, produced one of the saves of the season to deny the fourth-year striker.

Nevertheless, it was La Salle’s night to enjoy. Substitute midfielder Bernaldez was free in the Tamaraws box and calmly shot past Joyel to score in the 89th minute. Already a goal down, FEU’s circumstances worsened when Amita was handed a straight red card for stomping on La Salle midfielder Rafael Siggaoat.

The FEU-Diliman field will host both schools’ next games. La Salle will resume their campaign against the University of the Philippines Fighting Maroons on March 22, 4:00 PM, while FEU shall play the National University Bulldogs on April 8, 8:00 AM.