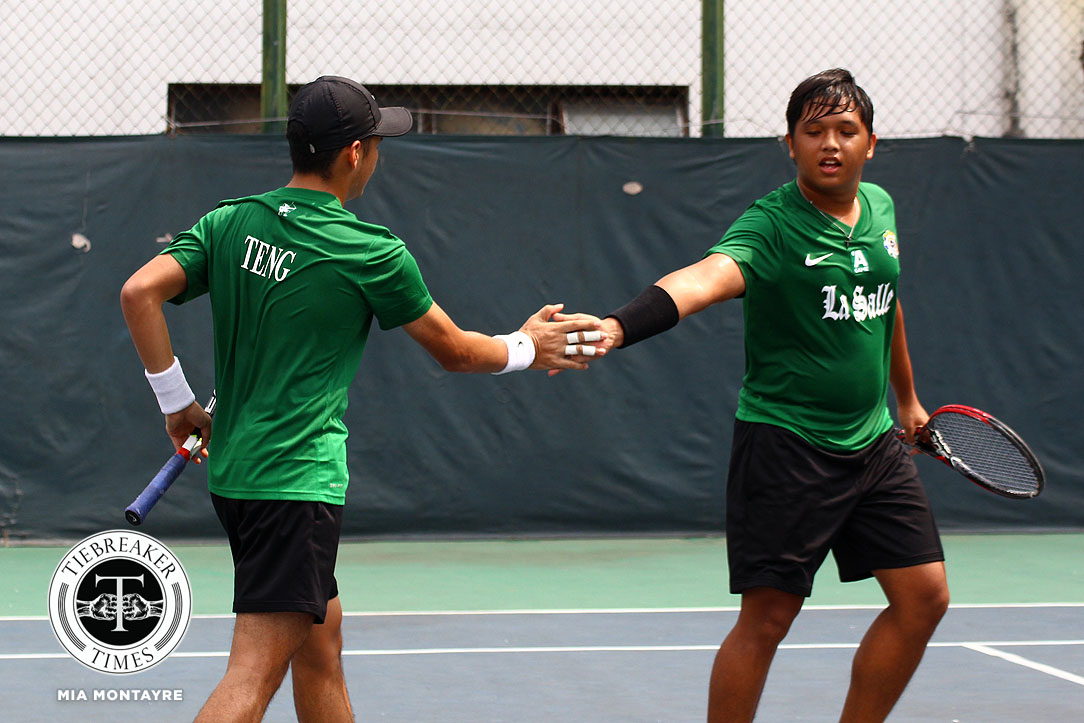 The De La Salle University Green Tennisters waylayed the University of the Philippines Fighting Maroons with a dominating 5-0 rout, Saturday at the Rizal Memorial Tennis Center.

Off to a sluggish start, the Green Tennisters pressed on and eventually closed off all opening for the Fighting Maroons.

La Salle skipper Kyle Parpan survived a grueling three-set match against UP captain Joshua Cano. It was neck-and-neck for the first two sets, 4-6, 6-4, but the La Sallian’s endurance and wit paid off in the deciding set, 6-1.

UP sophomore Joel Atienza was off to a great start versus Green Tennister LA Canizares after securing the first set at 6-3. However, in dominant fashion, Canizares recovered in the next two sets 6-2, 6-2.

The Qoqo Allian-Jonah Cano duo from Taft asserted their experience over the much younger duo from Diliman, Vincent Alanis and Auden Paduganan. La Salle finished the third match 6-4, 1-6, 6-1.

After already winning the first three matches securing their victory for the whole tie, the last two matches seemed to be a walk in the park for La Salle.

In the second doubles and last match for the two squads, Hans Asistio and Raphael Teng pulled off DLSU’s fifth win for the day after demolishing Maroons Kyle Joseph and Carlos Austria.

Winning five out of five matches came as a big surprise for team captain Parpan considering that they all seemed to struggle in their first sets.

#ReadMore  Gilas to bring in Lopez, Heading, Chiu vs Indonesia

“We were expecting for a deciding match, 3-2 ganyan, we were not expecting 5-0 win against UP. They are all good,” the UAAP veteran shared.

But just like a diesel engine, they delivered right when they needed it.

“Everyone played well, all three courts were down all at the same time nung first sets and we came up big sa second and third set. Eventually [that paved the way for the win] sa second doubles at third singles,” he said.

La Salle now stands at 2-1 and will seek to extend their winning streak on February 18 against defending champions University of the East.

On the other hand, UP which is now at 0-2, is in desperate need to list their first win this season tomorrow versus UE at the same venue.