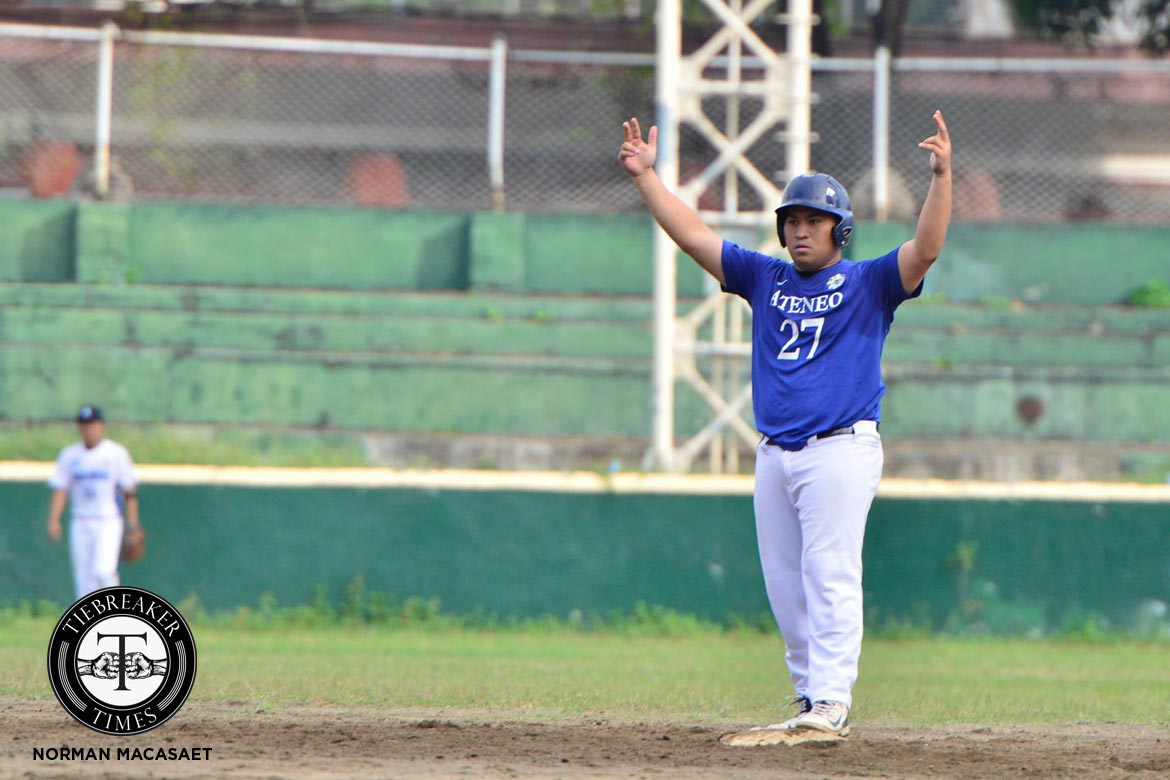 Ateneo skipper, fifth year right fielder Ramos, overcame his struggles all throughout season as he delivered one of the most clutch performances of the season to lead the Ateneo de Manila Blue Eagles past their first round tormentors, the Adamson University Soaring Falcons, 6-4, Sunday morning at the historic Rizal Memorial Baseball Stadium in the city of Manila.

The win sends Ateneo back to the Finals for the sixth straight year while Adamson, who fell to an even 4-4 slate, are now two games behind second-running University of Santo Tomas Golden Sox.

And it was Ramos who delivered the goods for Ateneo.

“I’m just happy that I finally got some hits in,” Ramos said. “I’ve been struggling the whole season, all I wanted to do was contribute to the team. Luckily, I pulled through today.”

Ramos, who had a batting average of just .267 this season, went 3-of-4 at bat in the game, registering a season-high six RBIs. His finest of moments, however, came in the ninth inning of the game.

With the game knotted at 4-all at the top of the ninth inning, the Blue Eagles had Marco Mallari on second base but had two outs when Ramos took to the plate. And after two pitches, the senior calmly slammed a huge run to left field, reaching the second row of the bleachers, to put Ateneo up entering the bottom end of the ninth.

“I know Adamson’s a tough team and they’re really trying to get to the Finals. We really trained hard last week and study their pitchers,” Ramos added.

With their season on the line, the Soaring Falcons went for broke. Against reliever Miggy Angeles, they were able to load up the bases with two outs, with clean-up hitter Steven Manaig on deck. Manaig connected on a grounder but went directly in front of third baseman Javi Macasaet, who calmly threw the ball to Rapho Balagtas to secure the win.

The Blue Eagles were up 3-1 during the third inning courtesy of a 3 RBI double from Ramos. The Soaring Falcons were able to tie the game in the next inning, though, after a sac fly by Vince Terible brought home Manaig, while a fielding error brought home Jerome Yenson.

Ramos was able to retake the lead in the fifth inning after connecting on a double that brought home Mallari. But in another crucial moment, Yenson slammed a solo homer in the eighth inning to tie the game heading into the ninth.

“Maybe it’s a mistake to put out Paulo sa eighth inning pa, but I asked him kasi if kaya pa niya. Pero it’s a mis-pitch yung tinamaan sa kanya,” Dizer admitted. “But outside of that, we were able to get this win. Lumalabas dikit, yung composure nandiyan and they were being tested and they delivered.”

Ace pitcher Paulo Macasaet pitched 7 2/3 innings and was able to strike out four. Reliever Angeles, a rookie, registered the first win of his career.

Mallari punched in three runs in the game.

#ReadMore  It's more about playoffs than Top 2 seeding for TNT, says Rosario

Ateneo had nine runners left on base, while Adamson had eight. Moreover, the Soaring Falcons were not able to take advantage of Ateneo’s four errors.

The Blue Eagles can formally eliminate the defending champions De La Salle University Green Batters on Wednesday, March 8, at 7:00am.

“The goal is to sweep the second round and we can’t take it easy since we are in the Finals. If we don’t, it might carry over sa Finals. I want them to pick up at the right time,” Dizer said about the match-up.

“Very big [game]. It will decide the fate of the other teams as well,” Ramos added.

Adamson, on the other hand, fights for their post-season hopes when they face the UST Golden Sox in the last game of the day.