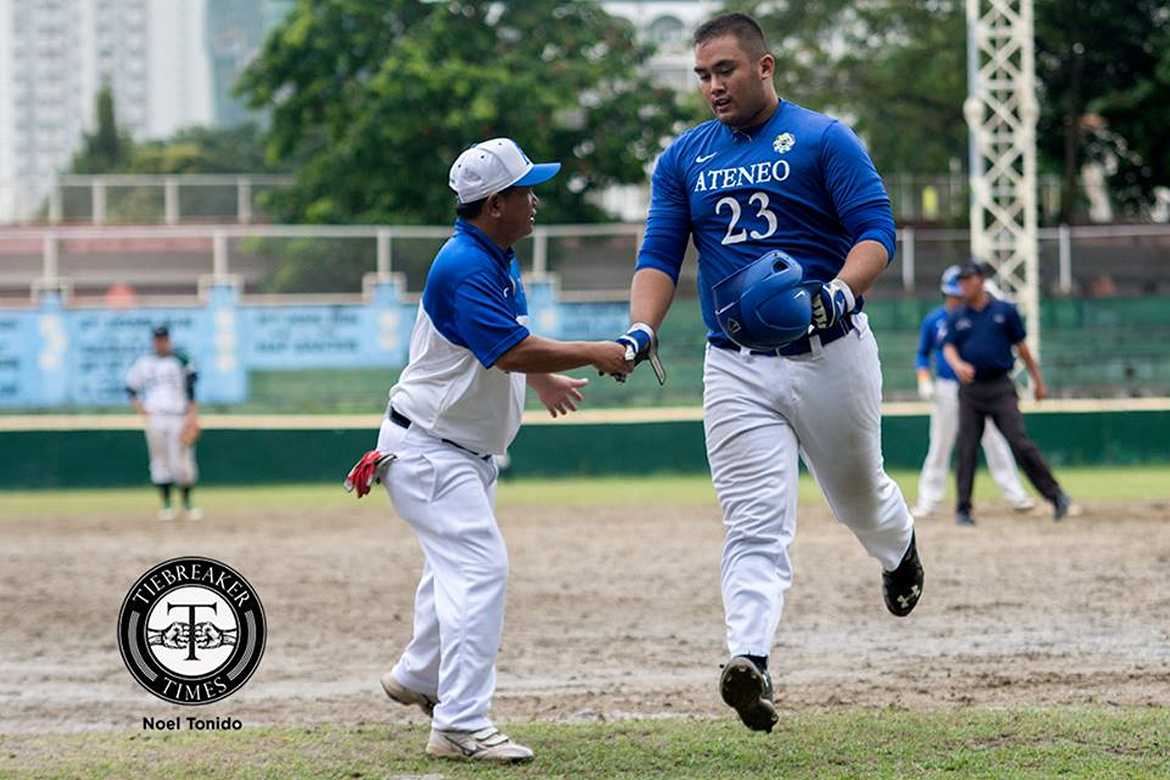 In a game that had pride on the line and solo lead at stake, the Ateneo de Manila University Blue Eagles played with vigor, pounding rivals De La Salle University Green Batters, 13-6, Sunday afternoon at the historic Rizal Memorial Baseball Stadium in Manila.

The win gave Ateneo solo lead at 4-1 while La Salle dropped to third with a 3-2 slate, pending the result of the aborted game between the UST Golden Sox and the UP Fighting Maroons. The game is set to be resumed on Wednesday, Ferbruary 22 with UST up 12-10 in the eighth inning.

“Actually, ang isang plus lang sa akin is they wanted to get back especially when they saw Adamson lose to UST. Alam nila what is at stake in this game and they wanted to be one more,” said Ateneo Baseball program director Randy Dizer.

Leading the demolition was Ryan Hilario, who celebrated his 22nd birthday a day before the game. The Filipino-American born in Virginia went 2-of-4 at bat but sparked Ateneo’s six-run first inning after slamming a three-run home run.

“If you noticed, we changed our batting order. When we looked at the stats of our last four games, yung 1-2-3 at 7-8-9 namin maganda pinapalo but yung gitna wala,” said about the change they made in their batting order. “So what we did, we jumbled it. Inakyat namin yung 7-8 and it worked. I hope it continues that way.”

READ  Clutch Teng lifts La Salle back to the Finals

“Sabi ko nga, ‘napakalakas ng La Salle.’ We are still the underdogs. Tao-tao, they are the much deeper team. Ang advantage lang namin is kung mauunahan namin which we did,” Dizer added.

The flurry of substitions at the top of the inning though resulted to La Salle retiring designated hitter Iggy Escano from the game. But even without La Salle’s slugger, the Green Batters tried to start a rally, driving in three runs in this inning highlighted by a 2 RBI single from Jonathan Park.

Paulo Macasaet (3-0) was able to hold La Salle in the middle innings, allowing just two runs the rest of the way, while reliever Miggy Angeles allowed just one run in the final 3 1/3 innings he pitched.

“Paulo and Miggy played well,” Dizer added. “Miggy only gave up run in all the games he pitched. I don’t want na the other teams na masanay sa bola niya. As much as possible, we want him to pitch only a few innings as relief or closer para hindi mabasa.”

The blue batters continued to be crisp on both ends, punching in two runs during the eighth inning and one more in the final inning.

Moreover, Ateneo’s fielding continued to be on point. It was most evident during the bottom of the eighth inning. With two outs, a long hit by fifth-year shortstop Franco Hashimoto was chased by Enrico Untalan. The rookie then raced, throwing the ball across the field to third base. The ball then made a steep drop exactly at the hands of Javi Macasaet to secure the out.

Marco Mallari added two RBI’s and two runs and went 4-of-5 at bat.

La Salle had eight runners left on base while allowing 14 hits. Park paced La Salle with 3 RBI’s, going 4-of-5 at bat.