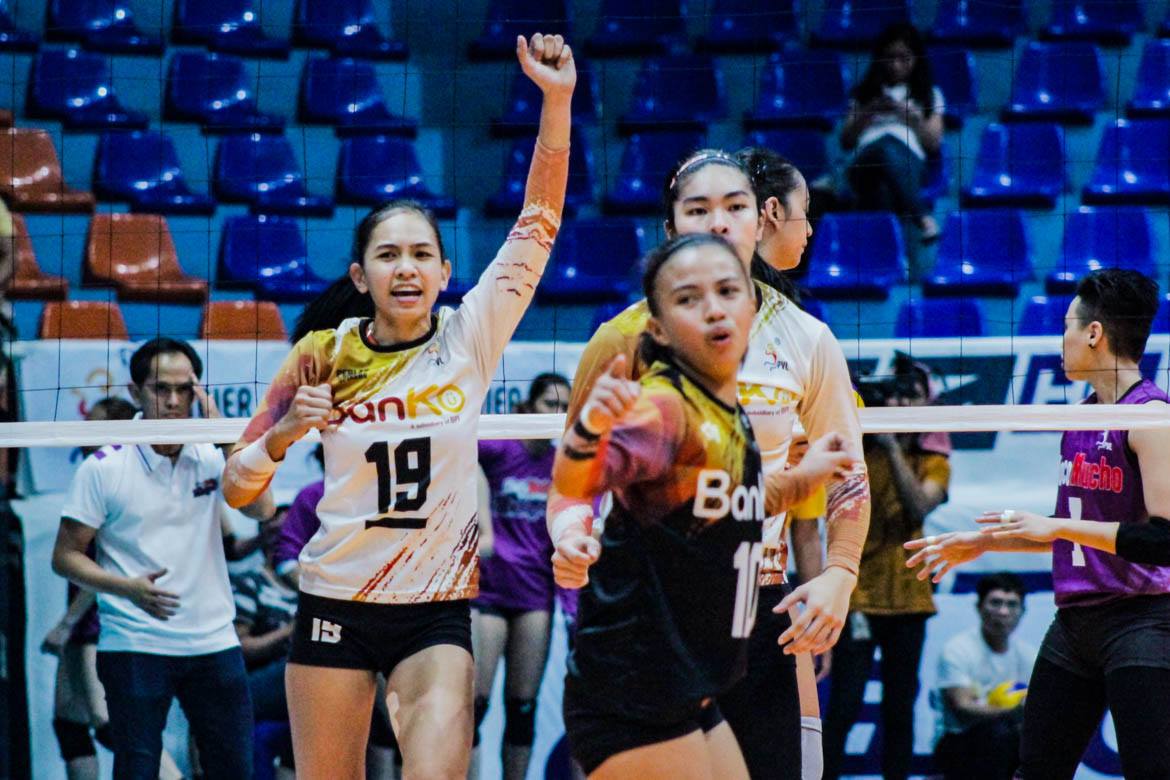 Nicole Tiamzon delivered in the clutch to lift the BanKo Perlas Spikers to solo third in the 2019 PVL Open Conference, ripping into the Choco Mucho Flying Titans in straight sets, 25-20, 25-19, 27-25, Wednesday at the FilOil Flying V Centre in San Juan City.

Tiamzon carried the cudgels down the stretch of the decisive third frame. She showed the way for the Perlas Spikers when the Flying Titans threatened to extend the match to a fourth set.

Knotted at 23, Carla Sandoval overcooked an attack attempt that put BanKo at match point. Kat Tolentino then refused to allow the Flying Titans to spiral down as she nailed the equalizer, 24-all.

Tolentino tried to tip the scales in Choco Mucho’a favor when she went for a backrow hit. Unfortunately, her spike caught the net, giving the Perlas Spikers another match point, 25-24.

Though Sandoval roofed Dzi Gervacio in the ensuing sequence to keep Choco Mucho alive, Tiamzon swiftly doused the fire out of the Flying Titans.

Rotating towards the left-wing, Tiamzon tormented the Choco Mucho defenders with her airborne assaults. Her down-the-line hammer buoyed the Perlas Spikers to a 26-25 cushion, before nailing an off-the-block hit that completed the rousing sweep.

Net defense also did wonders for the Perlas Spikers. Kathy Bersola collected five blocks to go with three service aces en route to 13 points. Sue Roces contributed a pair of rejections to end up with 11 markers.

Gervacio supplied 11 points as well built on 10 hits and an ace. Banko setter Jem Ferrer orchestrated the offense with 27 excellent sets, while protecting the floor with 14 excellent digs.

Tolentino topped Choco Mucho with 19 points in another losing cause. The product of Ateneo was the lone double-digit scorer for her team, with Maddie Madayag managing eight markers. Shannen Palec and Kim Gequillana each added six points. The latter also dispersed 14 excellent digs and 14 excellent receptions.

The Flying Titans drop down to sixth spot with a 6-8 card.

BanKo Perlas Spikers will look to keep their surge going when they face the PacificTown-Army Lady Troopers on Sunday, October 13, in Bacolod City. Meanwhile, Choco Mucho next face the Air Force Lady Jet Spikers on Saturday, October 12, at the same venue.