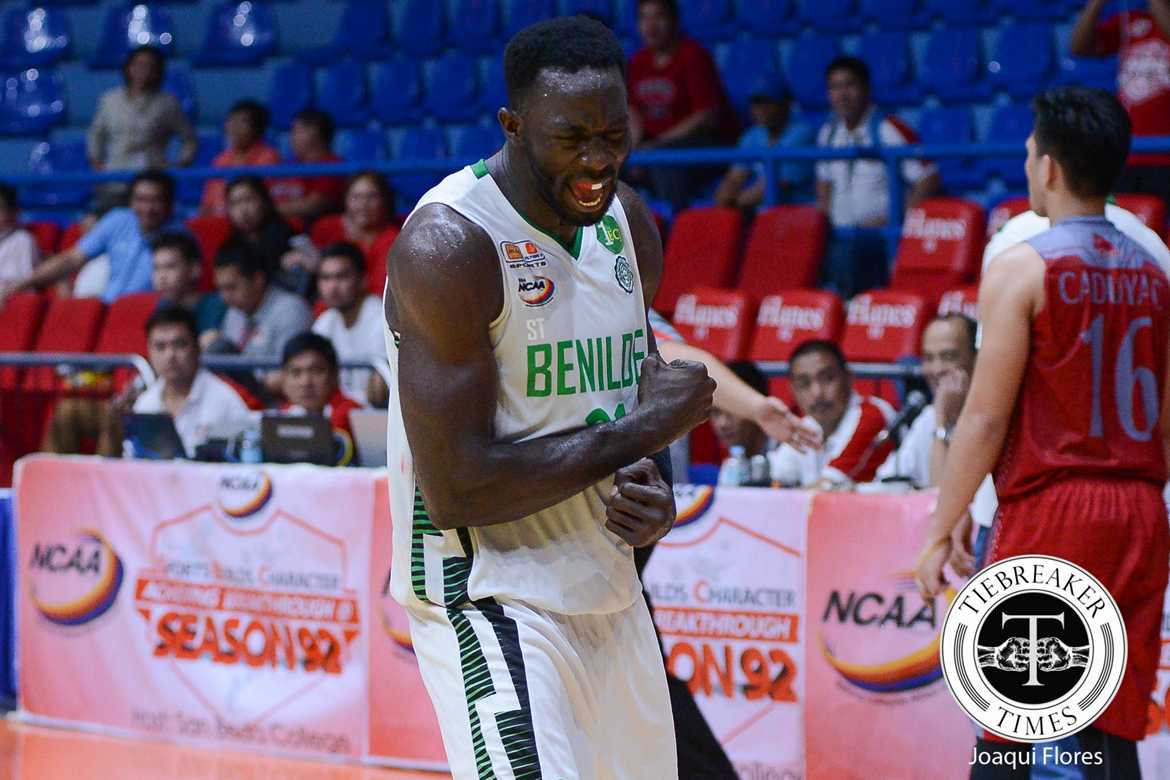 It was a game that had absolutely no bearing in the standings, but for a select group of young men, it was the most important game of the season.

The young College of Saint Benilde Blazers ended their NCAA Season 92 seniors basketball campaign with one win that felt like a championship, turning back the Lyceum of the Philippines University Pirates, 65-61, Friday afternoon at the Filoil Flying V Centre in San Juan City.

“This is a very emotional win for us, not only for me, but for everybody as well. We’ve been waiting for this day to come, but at least, we’re able to salvage one,” said a relieved fourth year Saint Benilde head coach Gabby Velasco after the win.

And truly, it was meant to be.

The Blazers were behind by as many as 13 points in the third quarter after starting the game strong. On a different day, the Saint Benilde would have caved in, but September 23 was no ordinary day for the Blazers.

Behind Senegalese student-athlete Clement Leutcheu, the Blazers fought back, eventually gaining the lead after a three-point play by Leutcheu, who finished the game with 18 points — 12 coming in the final frame, that gave CSB a 62-61 edge with 1:24 left in the game.

“The effort of the boys were there all throughout the season. My motivation is not only the win, but we’re also looking for the effort,” Velasco added. “Probably meron kaming pagkukulang at kailangang i-improve, but this is part of our growing up, part of our maturity. We have a young team and we’re not making any excuses.”

After bought teams locked each other down on the defensive end, rookie guard Franz Pasamante was able to break away from the Pirates’ clutches to extend Benilde’s lead to three with 25 ticks remaining. The physicality of the final seconds of the game then forced Reymar Caduyac to commit a turnover that led to a split on the stripe by Carlo Young and sealed CSB’s only win of the season.

Benilde’s sole graduating player, Fons Saavedra, did not play in the game after having sustained a fracture on his left foot in their game against the EAC Generals.

Edward Dixon and Yankie Haruna added 12 and 11 points respectively for the Blazers.

The Pirates were led by Caduyac and Wilson Baltazar with 11 points respectively. Mike Nzeusseu added 10 points and nine points for Lyceum, who finish the season at ninth place with a 6-12 slate.

Pumaren on La Salle: ‘It’s going to be weird at first’