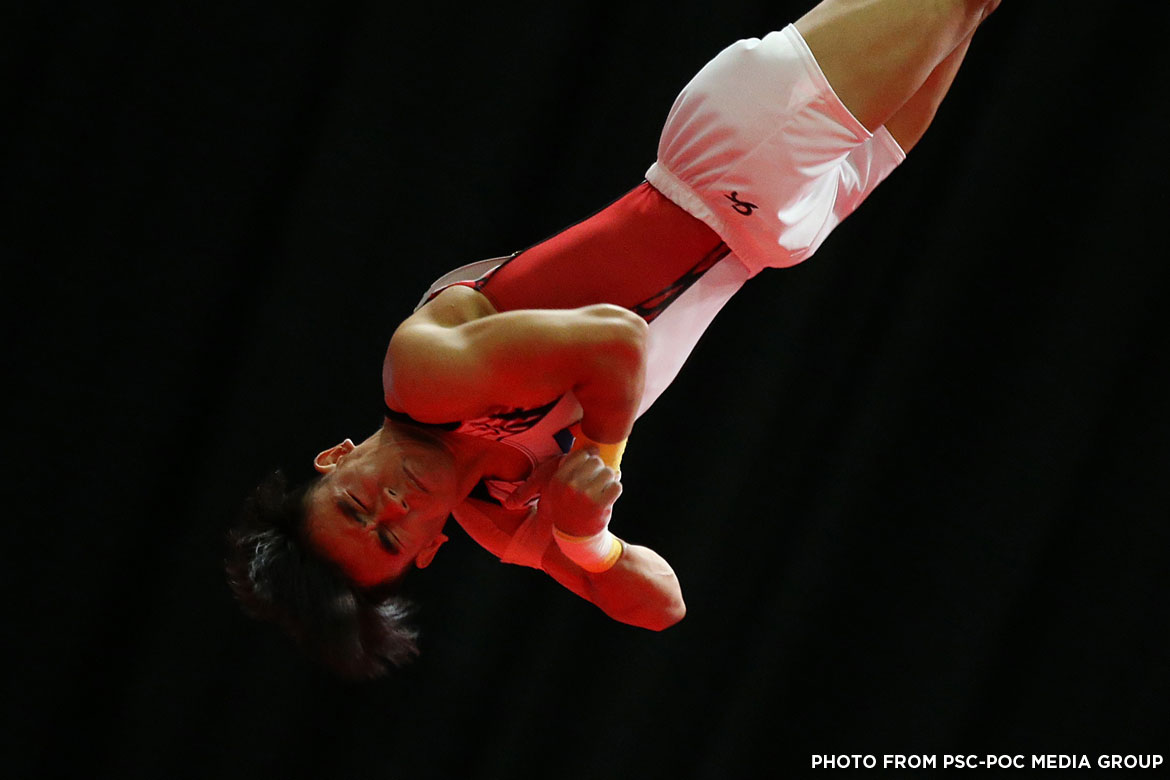 On a busy day when a gold rush was expected, a pair of gymnasts stepped forward and sparked the movement, delivering two gold medals to fuel the country’s campaign midway into the 29th Southeast Asian Games.

Veteran Reyland Capellan and rising star Kaitlin de Guzman buckled down to work early and reigned supreme in their respective events in the gymnastics competition Tuesday at the Malaysia International Trade and Exhibition Center in Kuala Lumpur.

The 23-year old Capellan, a gold medalist in the previous SEA Games in Singapore, overcame a faulty start to finish with 13.950 points en route to winning the men’s floor exercise event.

Capellan bested Zul Bahrin Bin Mat Asri of Malaysia and Tikumporn Surintornta of Thailand, who registered 13.750 and 13.6700 points to settle for the silver and bronze medals, respectively.

Capellan said he was so tense at the start, prompting him to lose his balance. But when he regained his composure, performing his routine appeared like a walk in the park for him.

“I’m so happy that I am able to contribute to the gold-medal production of the Philippines,” said Capellan, a former member of the Centro Escolar University pep squad who also campaigned in the World Artistic Gymnastics in Glasgow two years ago.

“I was a little nervous at the start that’s why I lost my balance and had a bad landing. But it’s okay; at least I made up for that missed opportunity in the latter part of my routine,” he added.

Barely an hour after grabbing the gold, it was the 17-year old de Guzman’s turn to step into the top podium as she 12.875 points to rule the uneven bars category and ends the country’s 20-year old gold-medal drought in women’s artistic gymnastics event.

Tracie Ang of Malaysia settled for the silver medal with 12.550 points while Rifda Irfanaluthfi of Indonesia grabbed the bronze medal with 12.075 points.

“I am so happy now that I won a gold medal representing the Philippines,” said de Guzman, a senior at Epic Charter Home School in Dallas, Texas.

Her mother, Cintamoni Dela Cruz, ruled the same event in the 1995 SEA Games in Chiang Mai and was part of the squad that emerged with a gold medal in team events in the Jakarta SEA Games in 1997.

But Dela Cruz maintained that she didn’t see it coming.

“We were not expecting her to win (the gold medal) since this is just her first SEA Games,” said Dela Cruz. “All we were hoping is for her to qualify in the finals. This victory is a major surprise. That’s why we’re so happy with this achievement.”