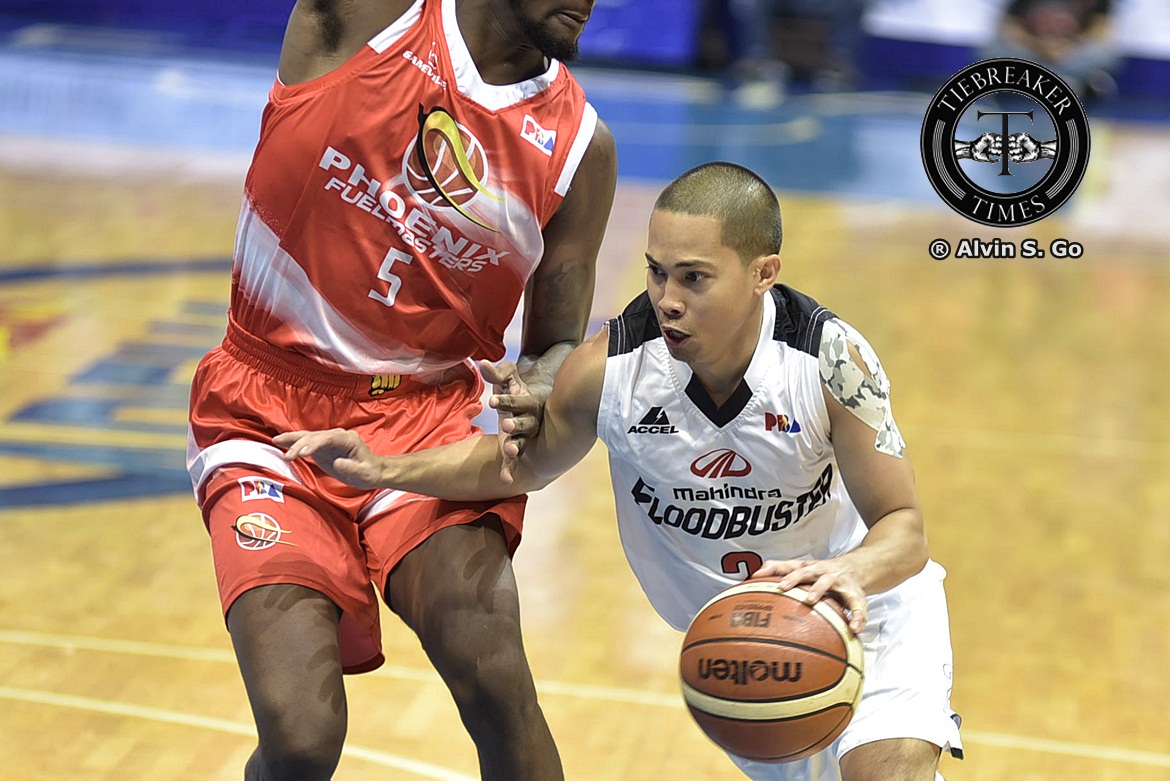 As the dust settled on Sunday night at the SM Mall of Asia Arena, the Mahindra Floodbuster found themselves emerging from a bout that had gone beyond their limits, against the Phoenix Fuel Masters. And winning coach Chris Gavina could not have been more relieved.

“My heart kinda stopped in the last three seconds,” said the second-year mentor moments after the Floodbuster’s exhilarating 122-121 victory.

The youthful mentor had enough reasons to feel that way. His side had been down narrowly late in the payoff period, but found ways to race back and force an extra five minutes. The same scenario happened in OT, but then again, they found answers — and luckily, the win.

And in those situations where they fought back gallantly, it was the backcourt tandem of third-year LA Revilla and rookie Reden Celda who rose as heroes — saving their team by dealing huge blows that led to the Fuel Masters’ demise.

But, it was not the typical player-turns-to-hero story. Both the outings of Revilla and Celda, who were averaging 6.6 and 10.1 points respectively, were performances that came when it mattered the most.

“LA is … Wow. I’m lost for words on how to describe LA right now [about] the performance he had tonight,” lauded Gavina of the La Salle product, who exploded for 26 points, seven in the waning moments of the final period that forces OT, on 10-of-14 shooting.

“His heart is just tremendous. He carried us in the last push — the shot he made at the end of regulation. He was feeling it. I wasn’t really going to stop him from trying to win that game, he was intent on leaving it all on the line.”

Celda, on the other hand, finished with 25 points on 17 shots — including the game-winning one-hander off an inbound pass that propelled Mahindra up by a point, 122-121, and eventually the game’s final result. He also added four caroms and three steals in his stat line.

READ  Despite falling short once more, it was still worth it for Allen Durham

“Reden has turned a corner. He’s probably the most consistent guy right now,” praised Gavina of the National University product. “For a rookie to carry that much load on his shoulders is tremendous, and it goes to show how much he work he puts in on a day to day basis.

“The fruits of his labor are coming to fruition right now.”

Indeed, the fearless guards showed what they can contribute, especially when everything is on the line. But most importantly, the Floodbuster came out victorious, and their playoff hopes have become alive once more.

“I think we’re gonna need some help with some other teams,” said Gavina.

“We’re one game away from Phoenix, so I mean, it’s a good situation to be statistically still in it, some way, somehow, considering the kind of up and down season we had.”

La Salle wanted to bring the best out of Jeron, Torres