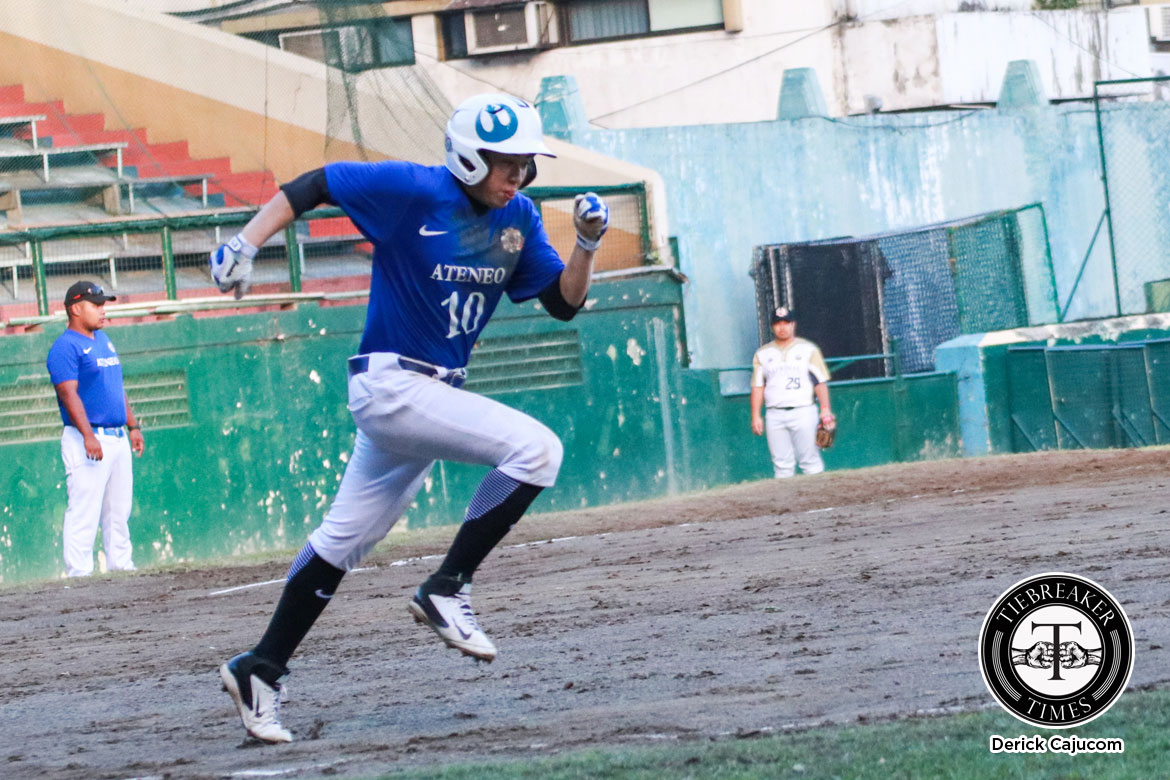 “Well I told the boys to be wary of NU since it’s one of the teams that we weren’t able to face in the off-season, the other one is Adamson. No one can take NU lightly since puro veterans yan,” said Ateneo assistant coach Bocc Bernardo.

With their second straight rout, the Blue Eagles sit atop the standings with a clean 2-0 record. The Bulldogs, on the other hand, dropped to a disappointing 0-2 slate.

Leading the Blue Eagles was senior Radito Banzon. After going 0-of-4 at-bat — including a strikeout — during opening day, the left fielder was on fire during the game, going 4-of-5 with two singles, a double, and a triple. He tallied four runs and an RBI.

“I talked to him before the game. Okay lang yung last game since baka kinakabahan pa siya. I told him to not think about it too much kasi alam ko naman kaya niya pumalo,” shared Bernardo. “He responded and it was very timely as two of our hitters were out.”

Marquis Alindogan, who went 5-of-5 against UP, was out due to fever, while sophomore Dan Laurel was a game-time decision.

Banzon provided the spark for Ateneo, connecting on a triple to open up the contest. Marco Mallari and Javi Macasaet were able to punch in two more runs to put the Blue Eagles up three runs.

“We want to make our first inning our trademark. We have to jump on our opponents early para mabawasan yung morale nila,” recalled Bernardo, who himself is a former UAAP champion.

“The maximum innings we want Paulo to pitch is five. We made it to the gameplan,” Bernardo beamed.

A strong fifth inning punched in five more runs for the Blue Eagles highlighted by doubles from Banzon, Javi Macasaet, and Dino Altomonte, while Ryan Hilario paved the way for two runs after connecting on a single.

Mallari, Hilario, and Enzo Orbeta had two RBIs each.

With the game virtually sealed, Paulo Macasaet was retired from the game after the fifth inning, as brothers Nicco and Nacho Lozano and Miggy Angeles pitched an inning each.

A run in the sixth and two more runs during the eigth inning mercifully ended the lopsided affair.

Clarence Caasalan chalked up his first loss of the season, allowing seven hits and eight runs during the 4 1/3 innings he was on the mound. Junmar Diarao and Alfredo de Guzman were the only Bulldogs to connect against Ateneo.

Ateneo, with Luis Estacio making his first-ever seniors start, will face the Adamson University Soaring Falcons on Sunday, February 11, in the game day’s main event. NU look to pick up their first win when they take on the De La Salle University Green Batters earlier in the day.