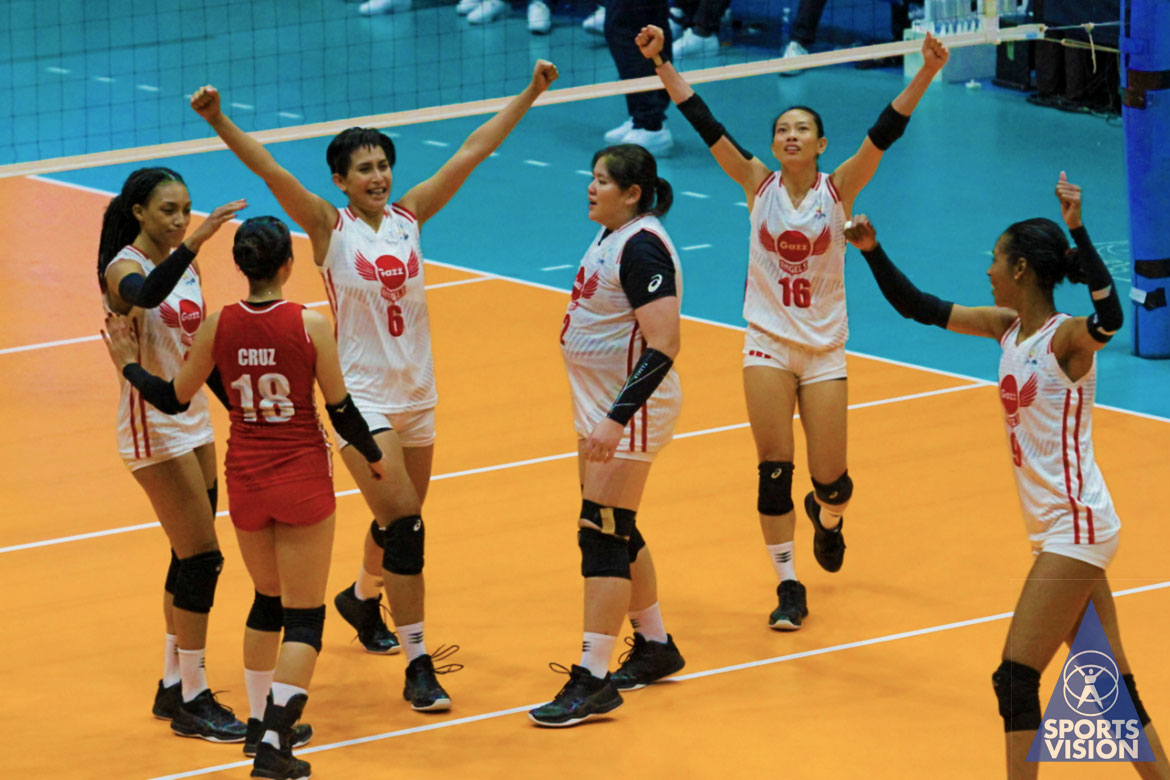 Fresh off an error-plagued performance in Game One last Wednesday, the Petro Gazz Angels bounced back against the Creamline Cool Smashers, 15-25, 25-22, 25-22, 25-12, in Game Two of the 2019 PVL Reinforced Conference championship series, Saturday evening at the FilOil Flying V Centre.

The victory allowed the Angels to even the series count at 1-all.

Drawing strength from its high-octane offense and with Jia Morado setting up the tempo early, Creamline mounted a 16-10 cushion that helped buoy the reigning champion to an early set advantage.

Reeling from a lackadaisical opening salvo, the Angels woke up from slumber and dragged the game into a back-and-forth swing.

Knotted at 17-all, Janisa Johnson took the bulk of the scoring, relentlessly stifling the defense of Creamline and converting four times in a 6-1 run that put Petro Gazz a deuce away from taking the second set. As Johnson gravitated the defense of the Cool Smashers towards her, Wilma Salas let loose a hammer before Jonah Sabete denied Kuttika Kaewpin.

Another nip-and-tuck affair ensued in the fourth set. Tied at 21-all, Johnson and Valdez exchanged punch-packing hits to keep the game at a stalemate. However, poor reception got the Cool Smashers in a heap of trouble, as the import duo of Salas and Johnson put up the set-clinching touches.

Picking up where they left off in the third set, Petro Gazz kept on with its steady play while the Cool Smashers’ offense stagnated. The Angels then went on a 21-10 spree that put them in the driver’s seat for good.

The two Petro Gazz reinforcements were the only ones in double-digit threshold for the Angels.

Salas was all over place, tallying a triple-double of 23 points, 13 excellent digs, and 10 excellent receptions. Johnson also had 23 of her own built on 18 attacks, three aces, and two blocks. Djanel Cheng tossed 28 excellent sets on top of three points for the Angels.

Valdez, who was hailed as the 2019 PVL Reinforced Conference MVP, also had a triple-double outing as she topped Creamline with 17 points, 12 excellent digs and 10 excellent receptions.

Kaewpin supplied 13 off 11 attacks and two aces laced with 12 excellent digs while Ale Blanco managed 10 spiked by three blocks. Morado, the Best Setter of the import-flavored tourney, dished out 33 excellent sets and a point.

The winner-take-all Game Three will be on July 14, tomorrow at the Ynares Sports Center in Antipolo.