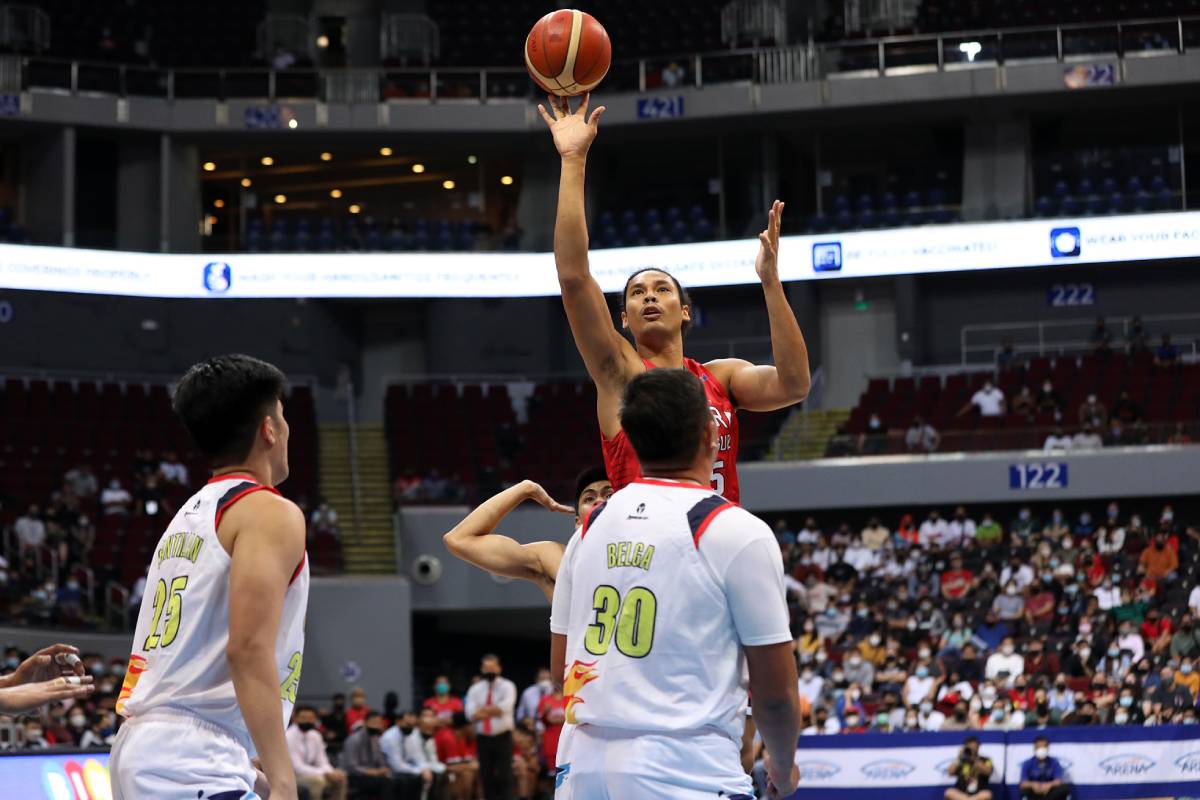 Barangay Ginebra withstood Rain or Shine’s numerous rallies, taking a 90-85 victory to collect win no. 2 in the 2022 PBA Philippine Cup, Wednesday night at the SM Mall of Asia Arena in PAsay.

Japeth Aguilar led the way with 23 points and seven rebounds as the Kings fended off the Elasto Painters’ fightback from as much as 21 down on the way to earning a share of the top spot of the standings with San Miguel Beer (2-0).

“I just thought that honestly, we were playing the swings of the game. We’d get up to a big lead, and then we’d soften up a little bit, and they’d come back. We gotta clean that up,” offered head coach Tim Cone.

“We played Rain or Shine who has a lot of young guards, and who played without their star, and so, we should have dictated the game a little bit better than we did. Obviously, we’re happy that we did,” he added.

Scottie Thompson finished with 16 points, eight rebounds, and six assists. Christian Standhardinger provided 13 points and 14 rebounds, while Arvin Tolentino chipped in 11 markers, which he all did in the third canto.

Ginebra went off to a hot start that saw them score 31 points in the first 12 minutes, and went on to establish a 79-58 lead early in the fourth.

But the Elasto Painters relied on their youth brigade, with Leonard Santillan’s triple making it a five-point gap, 87-82, with 36 seconds left.

Whatever plans they had got foiled, however, with LA Tenorio and Aguilar conniving for the final blows to silence RoS once and for all.

“The problem with us, with I mean by not being ready, I mean overall, for the conference. I think we’re ready for the start of the game, but the problem with us is sustaining our energy,” said Cone. “As well as we played in the first quarter, we played just that badly in the second quarter. But when we got a break and a rest at halftime, we came out and got going again.

“So again, it’s really about us being more prepared for the whole conference, for the big picture of the conference. And we’ve got a long ways to go, we feel, before we’re there. But we’re really happy to be up 2-0.”

Ginebra will look to chalk up its third win in a row against Magnolia (1-2) in another Clasico affair on Sunday at 6:30 p.m. still at the MoA Arena.

Mike Nieto led Rain or Shine with 15 points in the loss, their second straight since starting the season with a gritty win over Converge.

Beau Belga had 14 points, 10 rebounds, and seven assists. Andrei Caracut made 12 points, as the returning Gian Mamuyac added 10 for the Elasto Painters, who missed Gabe Norwood and Rey Nambatac due to injuries.

RoS is set to play on Sunday as well against Phoenix Super LPG at the 4:30 p.m. double-header opener in an attempt to snap out of its funk.