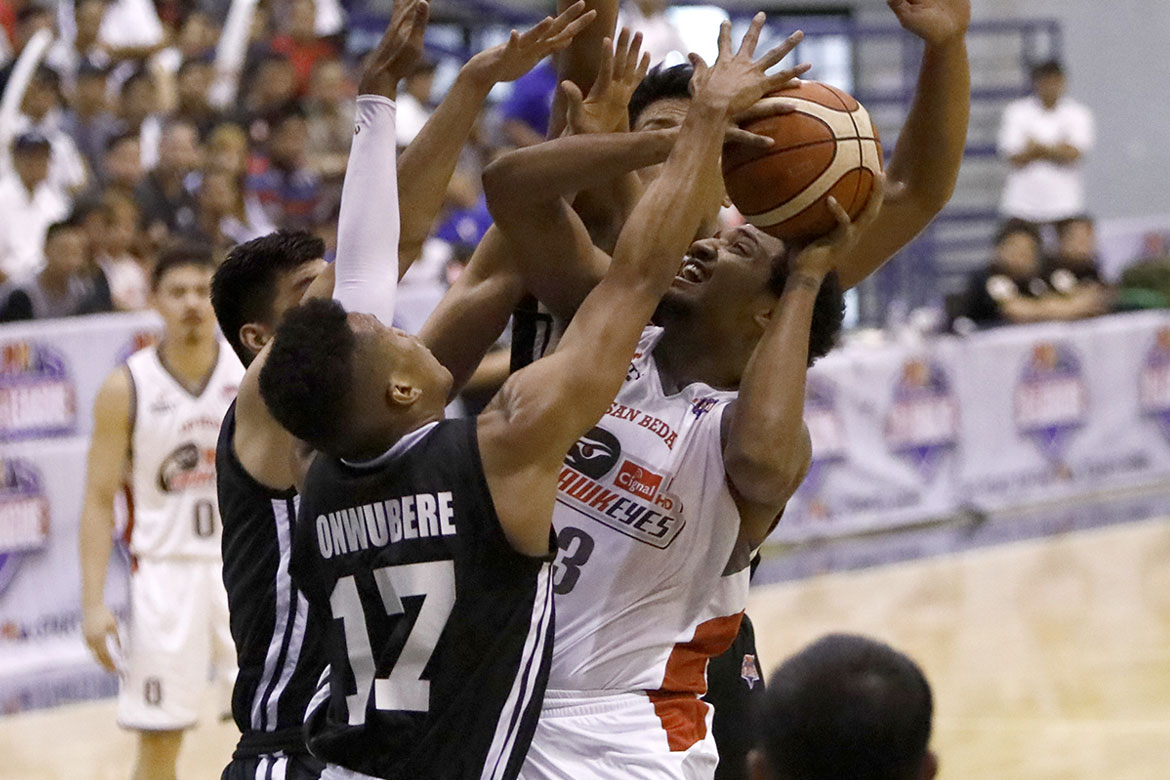 When the streamers rained from the rafters of the SMART-Araneta Coliseum last December, Jason Perkins was beaming, blessed to end his collegiate career with a championship. But at the back of his mind, he contemplated leaving the game of basketball for good.

Back in 2016, the 6-foot-3 stretch forward was only added to La Salle’s line-up two months before the season. Aside from that, he was battling through back and knee injuries all throughout the season, resulting to career-low averages of 4.3 points and 4.4 rebounds in just 12.8 minutes of action.

The young cager known as Hefty Lefty lost his smile.

“Coming out of La Salle, my confidence was really not high — obviously,” the 24-year-old shared.

And with it came a personal dilemma for the native of Shakopee, Minnesota: does he have a future in basketball?

But on one faithful January night, one phone call changed Perkins mind. On the other end of the line was San Beda officials inviting him to join the Cignal HD Hawkeyes in the PBA D-League.

“Man, it’s so crazy and ironic cause like… I did not know what God has for me.

“Ended up back inside [the court], to be back in San Beda, and I was just happy to be with a team,” the UAAP Season 76 Mythical team member recalled.

For Perkins, it was not about redemption nor trying to prove that he can still do it. His goal was simple: regain his lost confidence. And as the season progressed he was slowly able to do so, posting norms of 14.15 points, 8.23 rebounds, and 1.69 assists — including a 21-point outing in Cignal-San Beda’s championship-clinching game against Racal last Thursday.

“I ended up getting a championship, I just feel blessed right now. I really appreciate my teammates because I learned so much from them and helped me grow as a player.

“Coach Boyet [Fernandez] instilled a lot of confidence in me and I appreciate that a lot. The whole team worked hard and it pushed me to work harder,” he said.

Still, Perkins remains uncertain with what his next move is. Will he sign up with Cignal once more or will he join another team for the Foundation Cup?

This time around though, two things are certain for Perkins: he will continue to pursue his degree in La Salle and he is not entertaining thoughts of leaving the game of basketball.

“I got work then go to school. I’ll probably figure things out because, I got to be honest with you, I’m not too sure on what’s next. Maybe D-League again?,” the sure-fire lottery pick in the 2017 PBA Draft said.

“But definitely no retirement [laughs].”

Folayang warns Ting: ‘It’s time for the Landslide to take over’

After almost giving up, Corpuz happy to finally make it to the pros