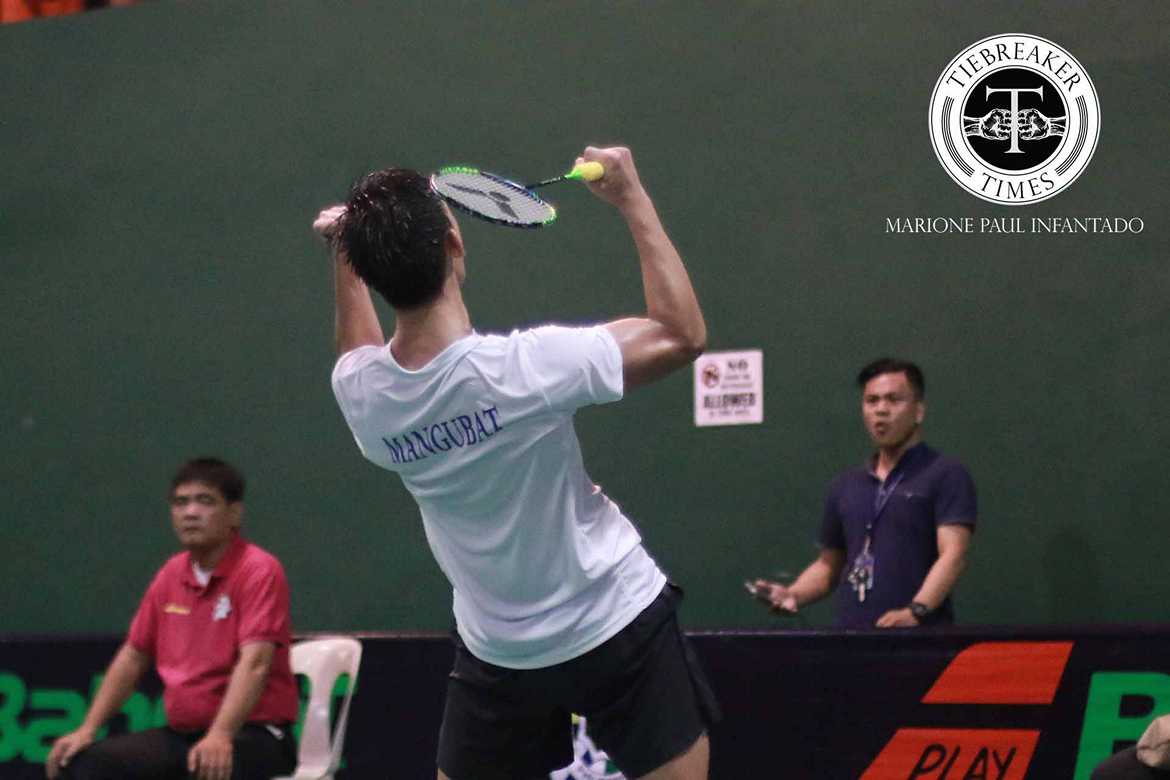 Second-year player Jan Mangubat turned in an impressive performance in both his singles and doubles assignments to steer the Ateneo de Manila University Blue Shuttlers to another semifinals appearance in a 3-1 conquest over season hosts University of Santo Tomas Tiger Shuttlers, Sunday morning at the Rizal Memorial Badminton Hall.

King Eagle Clarence Filart started things off for the Blue and White with his straight-sets win over John Paul Yabut, 21-17, 21-11. The Atenean emerged from a close tussle at the tail-end of the opening game, turning the 15-16 deficit into a 20-16 bubble before reaching game point.

In the second frame, it was all Filart as he pounced on the loose defense of his opponent. Smash after smash rained onto the floor as the fourth-year Blue Eagle took the lead for Ateneo.

Mangubat then put Ateneo at a commanding 2-0 lead with a dominant victory over Cris Sanchez. This time, the sophomore played like a well-oiled machine to deny Sanchez a chance in the game. Mangubat used his trademark power hits, but occasional soft drops surprised the Thomasian. The sophomore took the second singles match after half an hour, 21-13, 21-11.

But the Tigers did not hand the boys from Loyola the match easily, as team captain Paul Pantig and senior John Reyes took one for the team.

The UST tandem took care of Filart and current Ateneo skipper Sean Chan in the first doubles match. The Blue Shuttlers tried to keep the game close, but Reyes and Pantig got the better of the rallies, particularly at the middle portion of both games. This was enough for the graduating Thomasian skipper and his brother-in-arms to rescue their season.

It took a little more than 30 minutes, but the sophomore pair of Ateneo got it done. Mangubat and Bernardo finished off the tie with a 21-12, 21-18 win over John Mark Sotea and Kristian Barrios.

Ateneo registered a comprehensive win in the opening game as UST succumbed to errors. Sotea and Barrios got their groove in the second game; however, the small leads of the Blue Shuttlers were enough to put away the game for good.

Head coach Kennie Asuncion shared that he told the team to forget the previous tie’s loss to get their minds on this match.

“Kami, we just had to refocus lang. Yun lang ,” she said. “We talk about the games and we just refocus. We know what we wanted, we are set out talaga to get the gold.”

When asked how would they prepare for their first round match against rivals De La Salle University Green Shuttlers, she said, “We will approach it again with a lot of gusto, yung excitement. Syempre, we want to win, so we’ll do everything to be able to do that.”

The arch-rivals take the court on Wednesday, October 5 ,at 9am, in the first round of the postseason for the right to face twice-to-beat University of the Philippines Fighting Maroons.