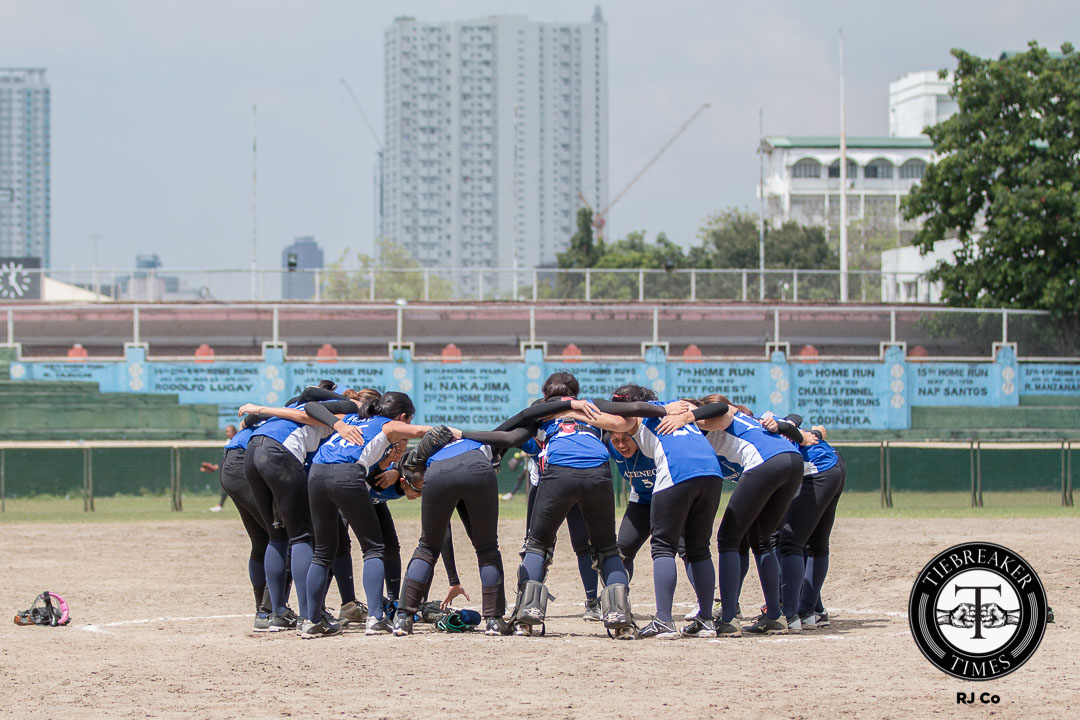 After two games and embarrassing losses against the Adamson Lady Falcons and the National University Lady Bulldogs, the post-game meetings and Dizer’s hard-nosed approach to the team finally paid dividends as the Ateneo Lady Eagles snapped their 23 game losing streak in a surprising 3-0 shutout of the UE Lady Warriors Monday afternoon at the historic Rizal Memorial Baseball Stadium.

A week ago, with head coach Dione Macasu taking a leave for an international tournament, Ateneo baseball program director Randy Dizer and his staff took it upon themselves to help salvage the team’s season and build on whatever they can get for Season 79.

In the first inning alone, the Lady Eagles were able to connect on three hits to gain the early lead. After one out, Nicki Borromeo connected with a single and then stole second base. A flyout of Ira Nevalga gave starting pitcher Jonavie Jerezano and the Lady Warriors two outs. In a surprise, cleanup hitter Bea Parma knocked a huge triple to center left field to bring home Borromeo. Next batter Cheska Imperial, sister of last season’s RBI king Dino Imperial of DLSU, grounded a single right into center field that brought home Parma for a 2-0 lead.

The Lady Eagles tried to continue the momentum during the top end of the second inning. With one out, Gabriele Macatulad gained base after a base hit while rookie from Miriam College Samantha Baterina gained prime scoring position after an overthrow by UE’s third basewoman Charlene Quintos. This forced UE head coach Edcel Bacarisas to retire Jerezano on the mound for Elvie Senangote. The next two batters were ousted that left the two Ateneo runners stranded.

The infield defense of the Lady Eagles was a huge factor in the shutout win. Unlike in their past games this season, the Blue-and-White displayed confidence in their fielding in knocking off 11 batters due to groundouts. Moreover, Ira Nevalga, pitching all seven innings, only gave up four hits in the game.

Up by just two runs going into the sixth inning, the Lady Eagles needed at least a run to provide cushion against a dangerous UE team. First batter Ira Nevalga gained base after being hit by a pitch while a sacrifice fly by Parma helped her gain prime real estate for a run. Imperial, who had gone two of two at bat prior to this, connected with a huge single to center field that brought home Nevalga. The Lady Warriors were able to end the inning with a double play after a flyout of Yla Trinidad at left field and an ouster of Imperial at home plate for a 9-7-2 double play, UE’s lone highlight of the game.

At the bottom of the final inning, shortstop Macatulad committed a throwing error that gave Kathleen Soliven base with one out as UE tried to make one rally to turn back the Lady Eagles. It was not meant to be however as the last two batters were flied-out by Macatulad and first basewoman Borromeo respectively to end the two season-long losing streak of the Lady Eagles.

#ReadMore  Reyes thankful to play once more, hopes to have impressed Kaohsiung

“I haven’t won in two years. The last time I won was in my sophomore year so this is really special,” Queen Eagle Angela Natividad, trying to fight back tears, shared after the game.

“Last game, after we lost against NU, we locked ourselves in the locker room and talked everything out,” she said. “We told each other that we can’t do these bad habits any more and we have to build each other up. Not carry each other down.”

On offense, it was rookie from Assumption College Cheska Imperial who led the Lady Eagle offense. The rookie was 3 of 3 at-bat with three singles that led to two RBIs. Sophomore Bea Parma went 1 of 2 in connecting with a triple that led to an RBI..

Looking forward to their last three games, Bernardo is confident that the Lady Eagles can ride on this win and will have a bright campaign come next season. “I think these girls have the potential. Kahit sinong coach magturo sa kanila basta maayos lang mananalo sila,” he closed

The Lady Eagles will next face the DLSU Lady Batters on Wednesday, February 26 at 1pm. On the other hand, the UE Lady Warriors, who are slowly falling out of the playoff race, take on the Adamson Lady Falcons in the first game of the day.