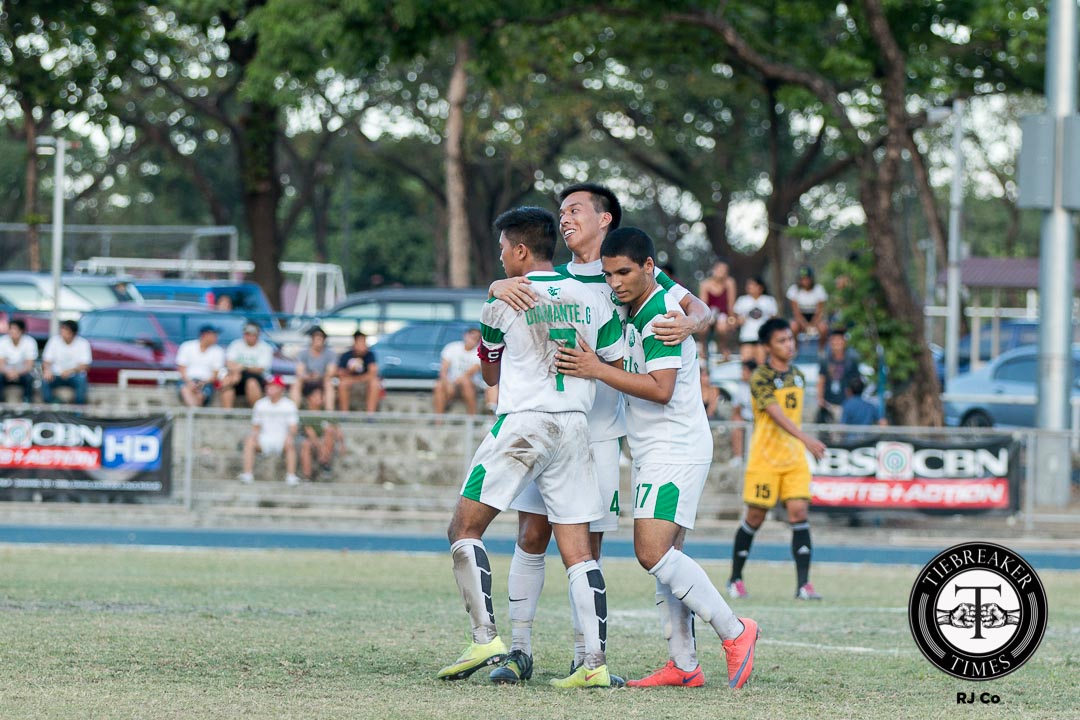 The De La Salle University Green Archers enjoyed the perfect elimination round finale with a, 4-0, win over the University of Santo Tomas Growling Tigers tonight (April, 21, 2016) at the Moro Lorenzo Field at the Ateneo de Manila University campus.

No yellow cards, injuries and a strong performance allows La Salle to enter the Final Four with utmost confidence. Green Archers captain Gelo Diamante scored a brace (14′ & 38′) while Jhoguev Ybanez (61′) and substitute Yoshiharu Koizumi (73′) added to La Salle’s tally in the second half. On the other hand, UST’s consolation was the fact that they already qualified for the Final Four after UP defeated FEU, 1-0, in the early kickoff.

Once the game started, it was La Salle which controlled the match. UST were a second half team and it showed when La Salle very much had most of the possession in the first half. Green Archers goalkeeper Paeng De Guzman made an easy save against Growling Tigers’ Fidel Kue and that was best attempt UST conjured in the said period.

After that wake up call, La Salle imposed themselves over UST. Gelo Diamante threatened to score early, but he shot wide. He wasn’t to be denied later, though, on at the 14th minute. Green Archers left-back Gerald Layumas directed his free kick towards Gelo Diamante whose first touch was then immaculate and he calmly slotted the ball inside the bottom-left corner of the UST goal.

What made UST struggle early on was La Salle’s constant penetration down the flanks. Layumas delivered a cross towards Gelo Diamante, with the latter’s attempt cleared by the Growling Tigers’ defense. At the other side, rookie Javi Romero-Salas was lively on his part of the pitch. Romero-Salas controlled a diagonal ball sent to him and released a cross towards an unmarked Gelo Diamante. Gelo Diamante then made no mistake and one-touched the ball home to double La Salle’s lead come the 38th minute.

Greggy Yang could have tripled La Salle’s lead before the break, but UST goalkeeper Zaldy Abraham saved it routinely. La Salle were good value for their, 2-0, lead at the break with UST outplayed by a mile.

UST have had this reputation for improving once the second half started. This time, however, the Growling Tigers failed to fully settle in the period as the Green Archers continued their dominance. Yang and Koizumi had attempts on goal after the restart, yet both failed to score. La Salle then forced a corner which was taken by rookie midfielder Jed Diamante. Jed Diamante delivered a good ball into the UST box which was converted into goal by Ybanez at the 61st minute.

La Salle coasted in the match. UST, it seemed, were just happy at the fact they made this season’s Final Four. The Growling Tigers’ midfield kingpin Ronald Batisla-Ong was left on the bench to keep him fresh for the post-season. The Green Archers compounded on the Growling Tigers’ woe in the game at the 74th minute. Jojo Borromeo made the assist as Koizumi headed the ball into the UST net.

With nothing to lose, UST finally had a go at La Salle’s goal deep into the second half. Dionisio Busmion Jr. and substitute Patrick O’Neill had direct free kicks which they failed to convert. O’Neill then forced La Salle substitute goalie Kerbi Almonte into making an easy save. Just before fulltime, Almonte denied the Growling Tigers a consolation goal with a great save. In the end, La Salle held on for a comfortable, 4-0, win against UST.

A fitting reward for La Salle’s win was that they finished the elimination round at 2nd place with 29 points. In contrast, UST were were stuck at 4th place with 25 points as goal difference separated them 3rd placers Ateneo.

Hans-Peter Smit, La Salle head coach, had this to say after the match, “Everything was moot and academic after the first game of UP-FEU. I just told the boys we just continued playing what we practiced for regardless of what happens. We need to prepare ourselves for the semis. That’s the only thing now we have to look forward to.”