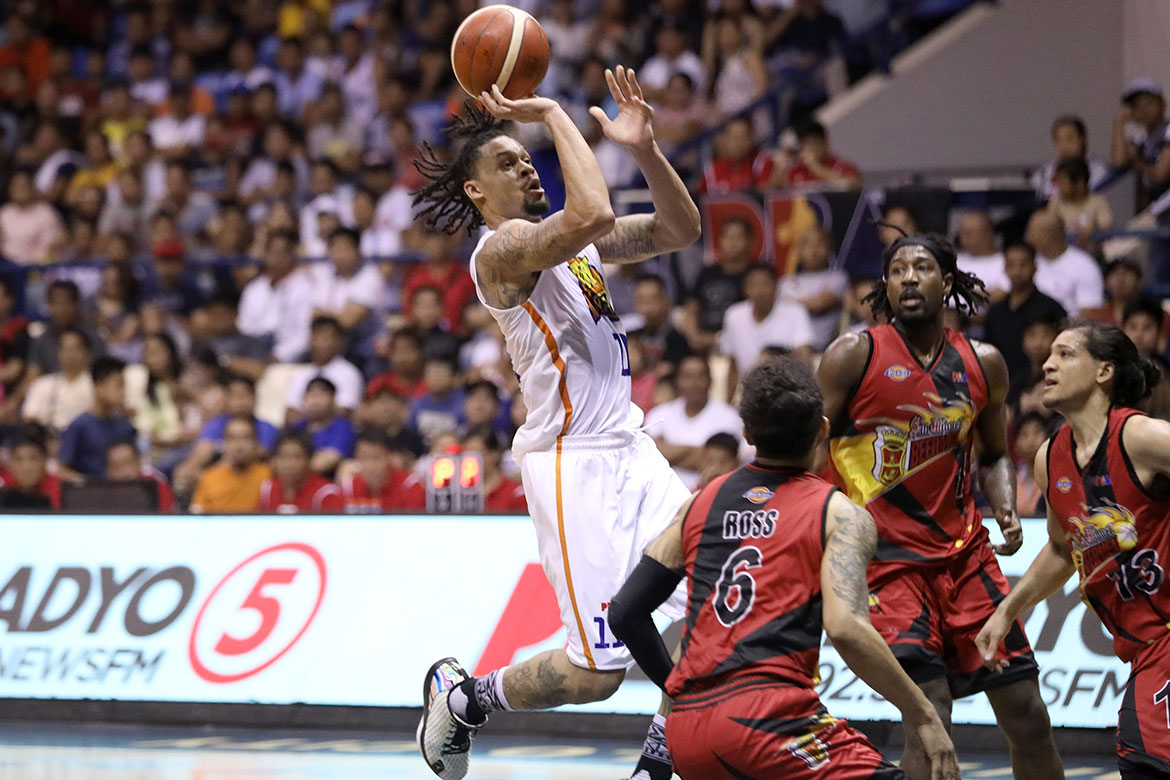 TNT leaned on KJ McDaniels down the stretch to repel the depleted San Miguel, 114-109, to clinch the third seed in the 2019 PBA Governors’ Cup Wednesday night at Ynares Center in Antipolo.

McDaniels sank a triple with 34 seconds left to play to give the lead back to the KaTropa, 110-108, after the Beermen stole the driver’s seat, 108-107, behind John Holland from being down 18.

The former NBA cager then took advantage of June Mar Fajardo’s failure to tie the game by widening his side’s lead to three, 112-109, through his freebies with 12.5 seconds to go.

McDaniels also came up big on defense as he smothered Holland’s potential game-tying trey from the top with about eight ticks left, before Ryan Reyes sank his foul shots to seal the win.

McDaniels finished with 44 points, including 18 in the final period alone, along with 12 rebounds, six assists, five blocks, and two steals in the win that snapped TNT’s three-game losing skid.

The locals shone bright as well in the victory, with Troy Rosario producing 30 points and 10 rebounds.

Roger Pogoy had 17 points while Jayson Castro — who has returned from a leg injury — flirted with a triple-double as he provided 12 markers, 11 assists, and nine boards for the KaTropa.

TNT heads into the quarters with a twice-to-beat advantage and will face the sixth-seeded Magnolia Hotshots. Their series starts on Monday, November 25, at the SMART Araneta Coliseum.

The Beermen were led by Holland with 25 points, 11 rebounds, six steals, and three assists, making up for his so-so debut versus Rain or Shine Elasto Painters last November 9 in Cebu.

Terrence Romeo had 18 points, Marcio Lassiter and Chris Ross each supplied 16 points, Fajardo made 13 points and 10 boards, while Alex Cabagnot added 12 markers in the loss.

San Miguel was without Arwind Santos, Kelly Nabong, and Ronald Tubid as they, along with Dez Wells, got suspended indefinitely by the team for the fight that broke out in practice last Sunday.

SMB has fallen to fifth following the loss. They will face the number four team and twice-to-beat advantage owner Barangay Ginebra in the next round on Sunday, November 24, also at the Big Dome.

Mike Nieto on Ateneo as ‘greatest ever’: ‘We just have the record to show it’

What changed during Alaska’s turnaround? They became a unit, says Vic Manuel