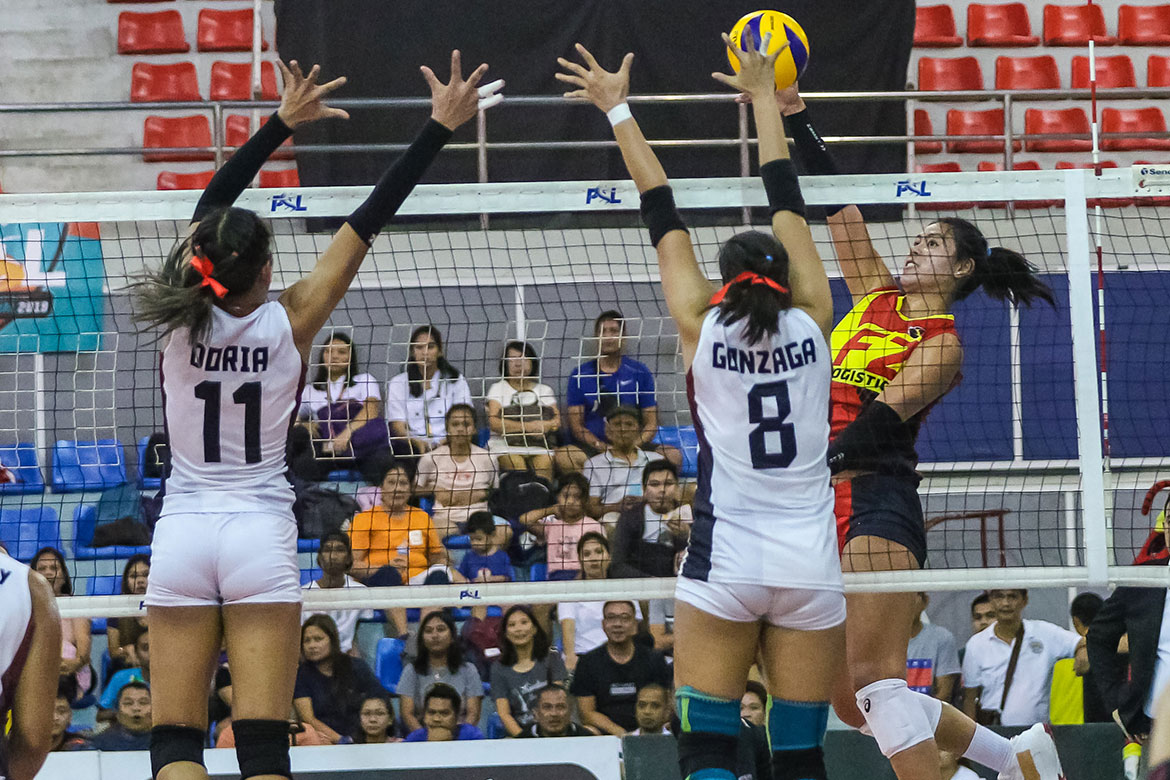 BULACAN — Kalei Mau kicked F2 Logistics’ title-retention bid to a higher gear, steering the Cargo Movers past the Cignal HD Spikers, 22-25, 25-22, 25-21, 25-21, to book the last ticket to the 2019 PSL Invitationals’ Cup Finals, Tuesday at the Malolos Sports and Convention Center.

Having returned to action two days ago following weeks of a layoff, the Fil-Hawaiian sensation helped the defending champions recover from a lethargic start. Her performance then showed the way in the succeeding sets en route to a berth in the Finale.

Knotted at 18 in the decisive fourth set, Kim Kianna Dy sparked a three-point surge for a slim 21-18 cushion. Fortunately for the HD Spikers, Ranya Musa stopped the bleeding with a hit as she tried to resuscitate Cignal’s offense.

However, the 6-foot-2 Mau proved too much. She swiftly restored order for the Cargo Movers, scoring thrice in a 3-1 spurt that buoyed F2 Logistics to match point, 24-21. Though Aby Maraño botched the potential game-winner from the service line, Desiree Cheng sealed Cignal’s fate with a spike off the block.

Mau — who nailed the set-clinching blows in the second and third frames — poured in 23 points built on 21 attacks, a kill block, and an ace. She also had 24 excellent digs for a monster double-double outing.

Majoy Baron chimed in 12 markers anchored on four service aces and three kill blocks. Dy also made her presence felt on all fronts, hammering down six spikes and three rejections for 11 points.

The Cargo Movers continued to be the bane of the HD Spikers, who have now suffered three heartbreakers dating back to the PSL All-Filipino Finals’ sweep at the hands of F2 Logistics.

Mylene Paat poured in 20 points on 16 attacks and four service aces in a losing cause. Jovelyn Gonzaga chipped in 14 markers — spiked by a pair of aces — and 26 excellent digs that went down the drain.

Meanwhile, Cignal skipper Rachel Daquis had a strong start to the all-important bout. She pummeled the differential hits down the stretch of the opening salvo, giving the HD Spikers an early buffer. But when the dust settled, she was limited to just seven points.

The Cargo Movers seek to quell the unbeaten Petron Blaze Spikers when they face off in the winner-take-all title bout on Thursday at the Ynares Sports Center in Pasig. On the same day, the HD Spikers take on the Foton Tornadoes in the bronze medal match.