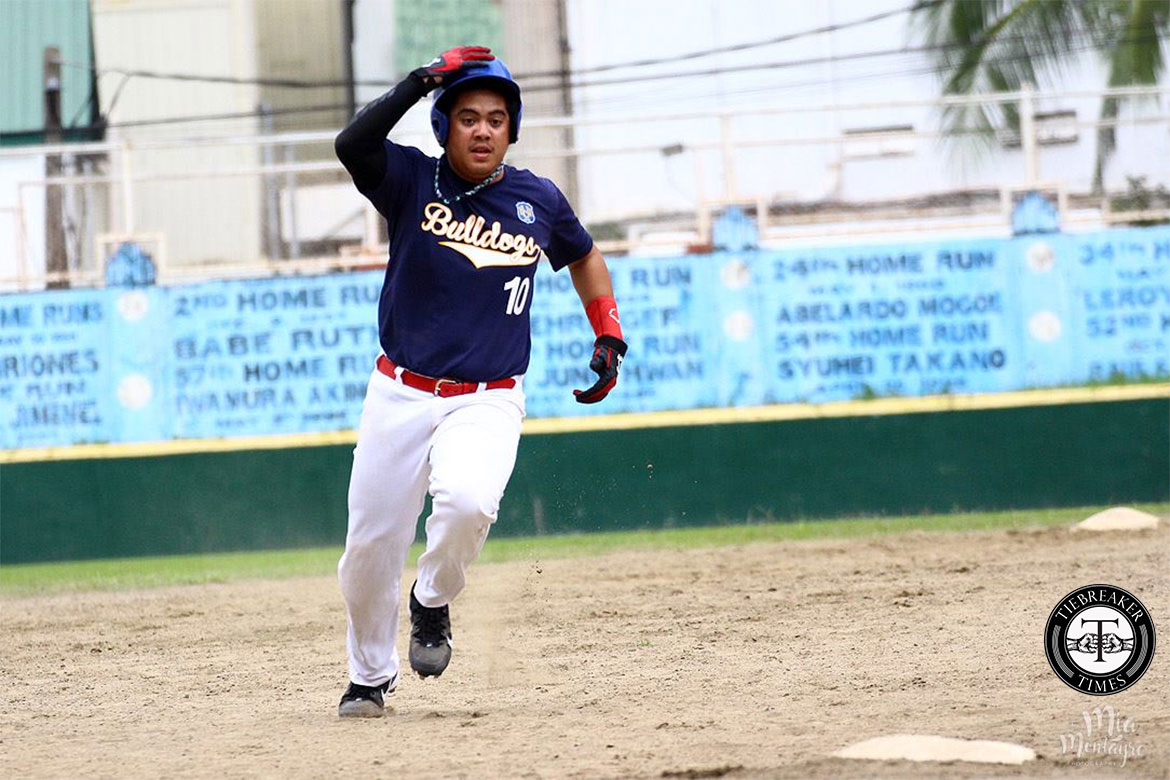 The Ateneo de Manila University could have secured at least a playoff for a Finals berth with a win. However, the National University Bulldogs were hungry for a win.

At the end of nine innings, it was the Bustillos-based squad who came out with a shocker. They eclipsed the league-leading Blue Eagles, 6-1, and clinched their second win of the season, Wednesday morning at the Rizal Memorial Baseball Stadium.

With their chances at a slot to the championship rounds marginally slim, head coach Egay Delos Reyes simply reminded his wards to play good baseball in their few remaining games. He said, “Sabi ko lang na we just need to finish this season, na we gain respect. And at the same time, we want to show our school officials what we are capable of in the future.”

Nonetheless, the future begins now and a win against the powerhouse Ateneo side was a decent start.

The Bulldogs opened well on their very first turn at bat after a 1-2-3 side on defense. Leo Arago got on base on four balls off Ateneo starting pitcher Luis Benedicto. Jerome Tenorio then plucked his first hit of the match to score both Arago and Clairon Santos, who also got a base hit earlier.

The onslaught did not stop for National U; after going scoreless in the second frame, they pulled away in the third off a huge four-run binge. Arago was given another free pass to first and Santos plucked another single, this time to the right, to send the former all the way home from second base.

That forced Ateneo head coach Bocc Bernardo to send Nacho Lozano to the mound. Unfortunately, the damage had been done. An error off second baseman Kiko Andaya sent both Tenorio on base and Santos home on a failed fielder’s choice attempt. Cyrus Barit then sent the ball to deep right-center as Tenorio crossed home, before the former scored himself off another fumble on the grounder to shortstop Javi Macasaet.

Ateneo stopped the bleeding in the fourth inning with a run to get themselves in the game. After Yoji Ueda grounded to second baseman Floro Malit off the throw to first, Macasaet forced an error on his opposite number Ron Salaysay to gain base. Martin Tan then drove a hot one between the first and second basemen, and into the right for a two-base hit that sent Macasaet back home.

That turned out to be the last offensive breakthrough of the game, as both teams turned to their defense. For National U, the development was much welcome despite some near-scoring innings in the later frames.

The NU mentor was pleased that the Bulldogs showed up on batting in this morale-boosting win.

Barit ended with three hits in four at-bats, but it was Tenorio’s solitary hit in the first inning that set the tone for the matc,  as it scored two runs. National U saw another exemplary performance from their man at the mound, as Mark Carolino silenced the erstwhile-potent Ateneo bats to six hits – resulting in just a single run.

The Bulldogs (2-6) will try to get their first twin victories when they face the University of the Philippines (2-6) on Sunday, March 17. On the other hand, the Ateneo Blue Eagles (6-2) will attempt to bounce back when they take on arch-rivals De La Salle University later that same day.