The next time De La Salle University sets foot on the pitch — whenever the UAAP resumes after the COVD-19 pandemic — it shall do so without the presence of its captain Jed Diamante.

The engineering student was one of those athletes in the collegiate league facing the dilemma of whether or not to return, given the abrupt end to his final playing year.

However, Diamante recently made the decision to call time in his role as a Green Archer.

“I’m currently in my final term undergoing my internship, so I’ll be graduating from DLSU really soon. After learning about the season cancellation, I spent days thinking about what’s next. To decide whether I should forego my final playing year, I took a step back and reviewed the reasons why I chose to play for DLSU in the first place,” said the 22-year-old Diamante.

“I looked back and assessed, why do I play football? To have fun, form relationships, and serve and represent the university. I believe I have done that in more ways even beyond football. The pandemic has taught me that you can still do so much for football and sports in general through other means.”

It was a difficult decision for the UAAP Season 78 Rookie of the Year. And people around him did their best to change his mind, but it just was not meant to be.

“There are some who tell me to play my final year since nabitin talaga kami from Season 82. We weren’t expecting that the last game we played together was our last together for UAAP. There’s no telling whether we’ll be back on the pitch one day. Walang closure, kaya may gusto pa maglaro,” said the Davao native, who is a product of Ateneo de Davao.

His final game wearing the Green and White was officially last March 5, against Far Eastern University at the historic Rizal Memorial Stadium. The Tamaraws gained an early lead, but the midfielder scored a late penalty to salvage a 1-1 draw.

“A few days after hearing the news, I called my co-captain, Nate (Alcantara), who was graduating as well at that time. We spent a few nights calling to share our thoughts,” said the Civil Engineering learner.

“It was heartbreaking knowing that was the last time I was hearing the cheers and drums as a UAAP athlete and I wasn’t prepared. Not like other graduating players who knew that they were playing their final game — in our case, it wasn’t like that kaya nabitin kami.”

It also pains him to be leaving his teammates and coaches behind.

Preparation for a UAAP season takes months of blood, sweat, and tears. And he gave all that alongside people who were with him through thick and thin.

“Looking back, I don’t remember playing against who and winning (or losing) by this much to this. All that flashbacks are the moments spent with the team and coaches. All the morning training we pushed each other, the team bondings we had, the euphoria after every victory, and the lessons we heard after every defeat,” the reigning Best Midfielder said.

“I remember having personal talks with my teammates in the dorm, or in school, or wherever. I’m glad I invested in relationships because I won myself brothers, friends, mentors, and experiences. These are what I will cherish the most looking back at the years I wore the green and white.”

In his four years with the team, Diamante experienced two Final Four runs in Seasons 78 and 80 and a finals appearance in Season 81. It was a roller-coaster ride for him, but those experiences will last him a lifetime.

“Every game played with my brother (Gelo) was worthy to be cherished. Scoring my first and last goals for the university; when I was entrusted with the responsibility to lead the team; and of course, reaching the finals after my eldest brother (Gio) helped the team to that position,” he shared.

“I choose to look at experiences as learning opportunities, kaya I don’t bear any regrets with everything that has happened.”

Now with his choice settled, Diamante is focusing on his projects and building his career as a civil engineer.

He has been through plenty as a student-athlete, and he feels it is finally time to apply what he learned on and off the pitch in the real world. 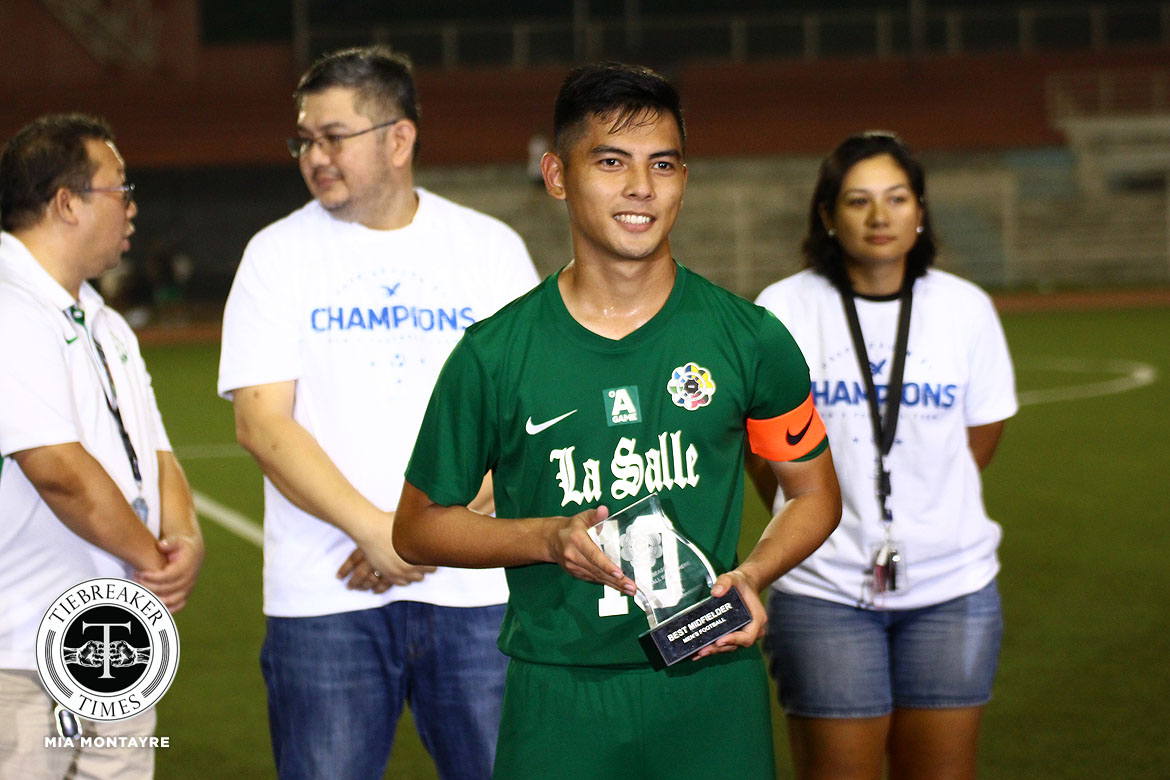 “I took time to discern upon the decision and with a calm mind and heart, I can say the decision is final. Looking forward, I’m beyond excited to explore the opportunities life has to offer,” he reflected.

“It warms my heart seeing that my impact went beyond football.”