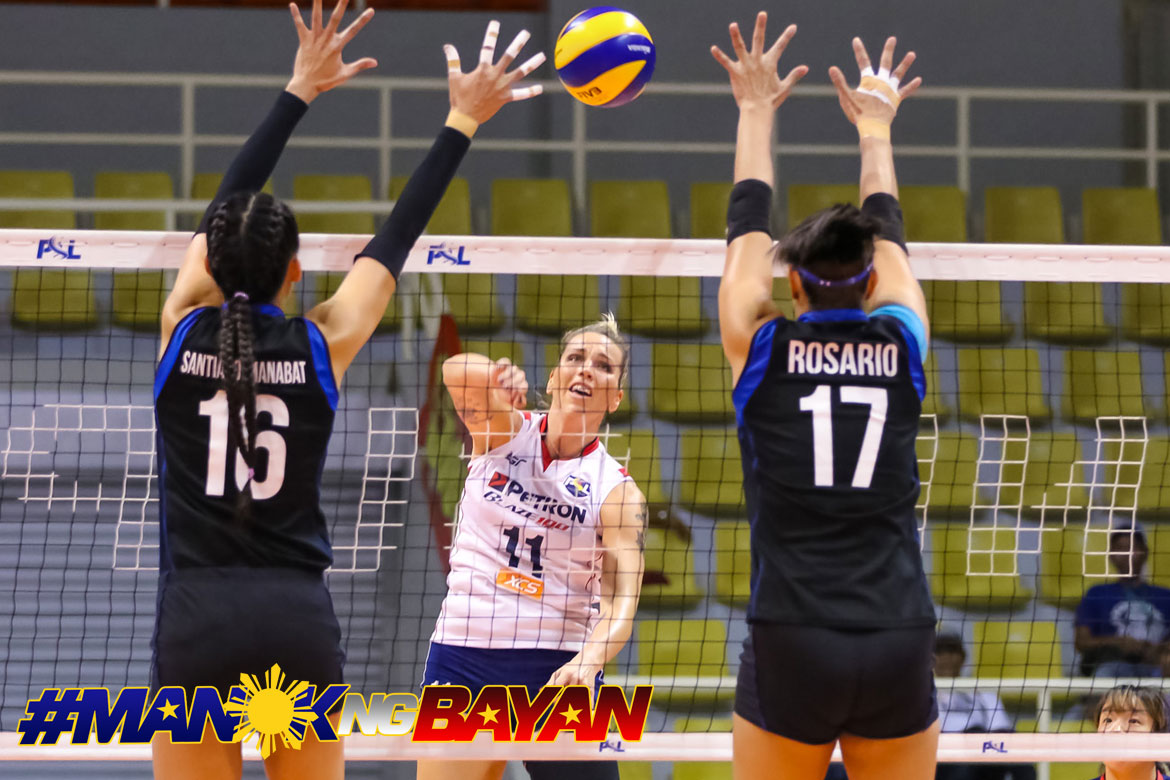 The Petron Blaze Spikers hung tough down the stretch to book a scary, 14-25, 25-16, 22-25, 25-18, 15-13 victory over the Foton Tornadoes to preserve their clean slate in the Chooks-to-Go/Philippine Superliga Grand Prix, Saturday at the Sta. Rosa Sports Center in Laguna.

Hillary Hurley came through 19 kills and two blocks for 21 points, while Lindsay Stalzer delivered 11 kills, three blocks and three aces for 17 points for the Blaze Spikers, who remain unbeaten in six matches

After coasting to five consecutive wins, Petron found themseves in big trouble as Foton, two-time Grand Prix champions, showed up prepared and ready for the kill.

“Definitely there’s some pressure there,” said Hurley, whose team figured in their first five-set encounter of the season. “But I told my (teammates) that if we keep that out of my mind, if we play more as a team, then it would be easier.”

The Tornadoes threatened to pull the rug out from under the Blaze Spikers, but Stalzer and Hurley caught fire in the fourth set to force a decider.

With Stalzer leading the charge, Petron raced to an 8-4 advantage in the early stretch of the fifth set, but Brooke Kranda and the Tornadoes restored order and tied the count at 9.

Petron fought back, as Remy Palma connected on a quick kill at the middle, followed by an ace from Rhea Dimaculangan to claim the match point, 14-11.

Although Kranda and Elizabeth Wendel tried to further stretch the match with back-to-back hits, Stalzer delivered a beautifully-placed shot from the right flank to seal the victory.

“I think tonight we did great,” Hurley added. “This is a perfect opportunity for us to learn because we haven’t been to a five-setter and any pressure moment yet so I’m really proud of my team for stepping up.”

Kranda had 17 kills to finish with 18 points, while Wendel and Manabat finished with 16 and 15 points respectively for the Tornadoes, who suffered their third loss in five starts.

Klisura, who dazzled the crowd with her electrifying performance, delivered a solid all-around effort as she fired 19 kills, four blocks and three aces, while Taylor Milton, Royse Tubino and Joanne Bunag backed her up in the attack zone with 13, 11 and 10 markers, respectively.

“Sara is an excellent player,” said Cocolife coach Moro Branislav, referring to her prized ward, who played for him at the club level in Serbia before reuniting with her at Foton last year.

“For my opinion, she is a very good player. She’s a good scorer who commits very little mistakes. That’s why in the fourth set, after Generika won the third set, we decided to give (the ball) to Sara. It’s good that she delivered and helped us get this victory,” the decorated mentor added.