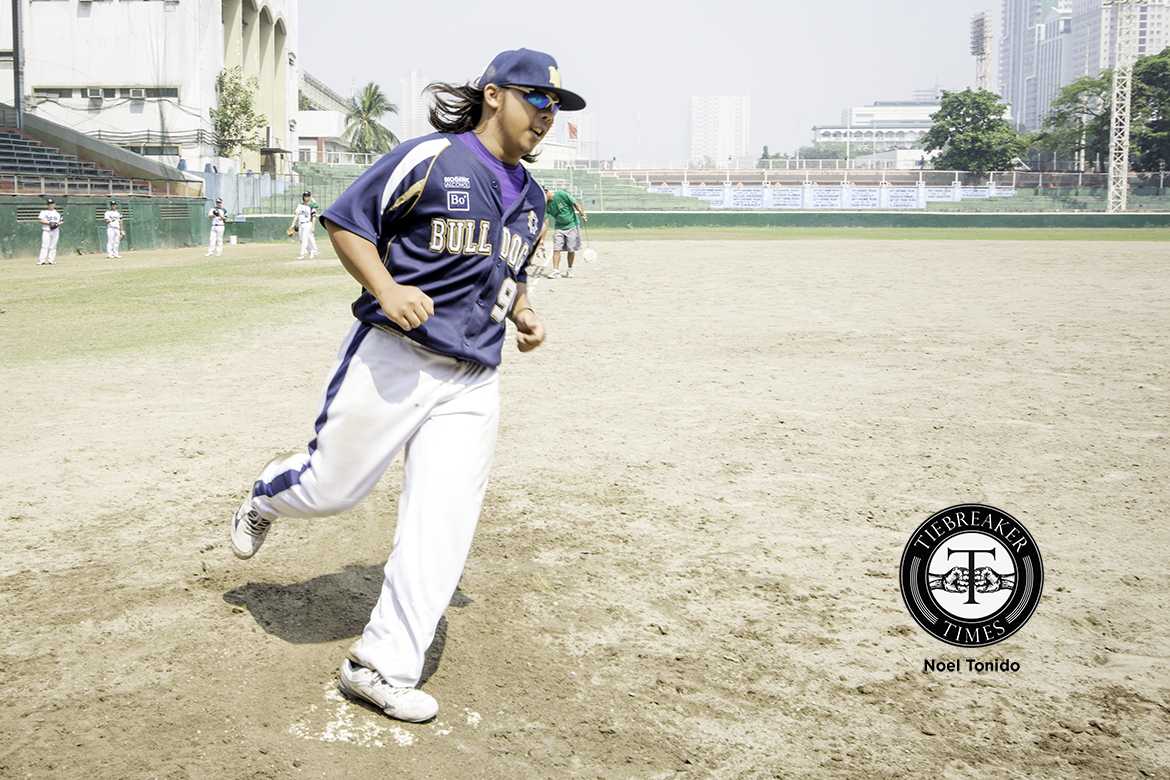 It was a highly emotional game as seven seniors, three from National University and four from the University of the Philippines, bid farewell to their collegiate baseball careers.

Lefty NU pitcher/first baseman Junmar Diarao made sure to send his seniors home on a high note in an 8-6 win over the Fighting Maroons. More importantly, the win kept the Bulldogs hopes alive for a podium finish.

“What an emotional game,” an exhasperated NU right fielder Herxel Fortunato said about the game.

The Bulldogs’ scoring started in the second inning. After a single hit in the first inning against Miguel Herrera, a fielding error and two hits paved the way for a three-run inning for NU. Robin Libid, from first base, was able to punch in the first run of the game after an overthrow by right fielder Emil Fernandez to second base. Ken Ybanez then singled to center left field driving in Maiko Sugimoto. A failed fielders choice attempt with one out brought in Ybanez to cap the rally.

After not allowing a single hit in the first two innings, starting pitcher Diarao was tagged five times that brought the Fighting Maroons back in the game. Junior Edelton Espejo and seniors James Legaspi and SJ San Juan were able to pick up runs to knot the game at 3-all.

With their third place hopes at stake, the Bulldogs blasted three more runs at the top of the fourth inning that broke the game wide open. An error by third baseman Espejo gave Alfredo De Guzman base while Herxel Fortunato doubled afterwards to right field to bring home the runner. After an overthrow by shortstop San Juan that gave Julius Mondragon base, Diarao popped a two-out single to left field to bring home the two runners and put the Bulldogs up.

Diarao was retired during the bottom end of the inning as the Maroons were able to pick up a run after a single by Legaspi that brought home Fernandez. The two squads exchanged runs in the sixth and seventh innings but closer and rookie Clarion Santos was able to hold the Fighting Maroons to give the Bulldogs a fighting shot to finish the tournament at third place.

Graduating player Herxel Fortunato was an excellent 2 for 3 at bat in his final game in the UAAP. He was able to punch in a run and had an RBI. Fortunato was retired from the game at the bottom of the sixth inning and was showered by applause from both sides and by the Ateneo Blue Eagles and La Salle Green Batters in attendance.

Winning pitcher Junmar Diarao gave up nine hits in the 3 1/3 innings he pitched while reliever Santos was tagged four times but gave up just two runs. Diarao though was excellent on the offensive end in having 3 RBIs.

The NU Bulldogs will finish the tournament at third place with a 5-5 slate. On the other hand, the UP Fighting Maroons, after a third place outing last season, will finish at sixth place in the six team tournament.