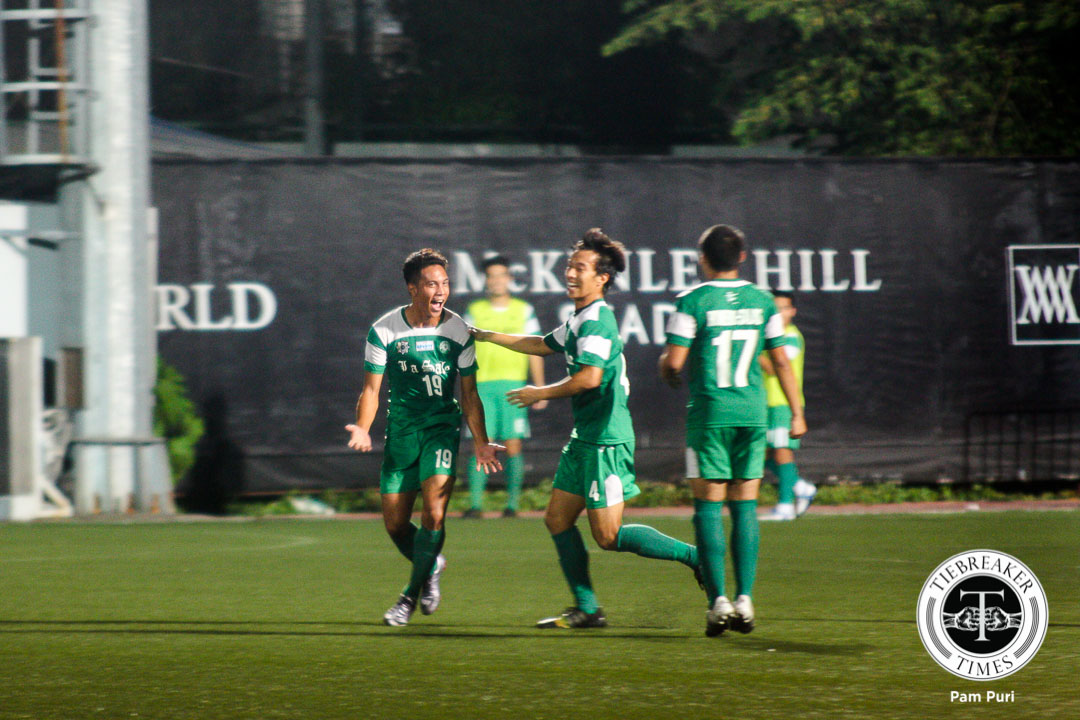 Matches against those teams who linger at the bottom of the league table tend to be tricky sometimes. Score early and the floodgates open while a longer stalemate empowers the so-called weaker team. Allow the game to be goalless for as long as possible and the favorites tend to get frustrated.

Fortunately for the De La Salle University Green Archers, though, that they kept a cool head, played their game and secured a customary win against the bottom-placed University of the East Red Warriors in their UAAP Season 78 Men’s Football Tournament second round encounter last night (April 9, 2016) at the McKinley Hill Stadium in Taguig.

Second half goals from Gerald Layumas (56′) and Gelo Diamante (64′) secured the three valuable points. It’s the Green Archers’ second straight win after their dramatic victory against the National University Bulldogs last week. The result helped maintain La Salle’s top four position where they now sit at 3rd place with 23 points. On the other hand, UE still have 1 point and are stuck at 8th place.

Unlike the two teams’ first round encounter, La Salle was evidently more fired up come kick-off. La Salle didn’t show any signs of apathy throughout the match, while UE themselves also became a more compact and disciplined team. In fact, it was the Red Warriors who had the first sniff of goal when Mar Diano shot wide.

After that, however, arrived the Green Archers’ bombardment. Rigoberto Joseph failed to hit the target and then Jojo Borromeo had his tap-in cleared off the line. Greggy Yang, however, should have added to his goal tally moments later, yet he failed to score despite being positioned well both times for the rebound. The Red Warriors held firm at those instances and even had an attempt themselves when Diano won the ball off Green Archers rookie right-back Nathan Alcantara, yet the game remained goalless.

One thing which prevented La Salle from getting some first half goals was lackluster finishing. Jhoguev Ybanez, Borromeo and Javi Romero-Salas shot wayward when given the chance. Ybanez himself had two free kicks, yet the Red Warriors dealt with them easily. Not that it was only La Salle who had that sickness as UE also failed to hit the target when both Ariel Mallen and Diano found space to shoot.

Before the halftime break, it was La Salle which probed for the opening goal. UE were pegged back, content to just see the period out without conceding any goal. The Red Warriors’ stingy defense forced another round of bland shooting from the Green Archers. Joseph had the tenacity to attempt an overhead kick, albeit he failed, yet the ball landed to Gelo Diamante who squandered the opportunity.

Just at the eve of the halftime whistle, Jed Diamante found himself at good position at the far post, but he could only miscue the cross which went his way. A stalemate was reached at the break, with UE understandably the happier side.

Once the second half started, however, it was all La Salle. Yang set the tone when his free kick hit the wall then Borromeo had a go, only for the UE defenders to block the shot. That goal was only a matter of time for the Green Archers and it came soon enough. Yang had another free kick and he directed the ball low, it eventually landed to Layumas who directed it home so close to the goal at the 56th minute. A sigh of relief flowed through La Salle as they finally got the goal they deserved.

From then on, UE folded. The Red Warriors allowed their heads to drop and were very much pushed back. Another thing they did wrong was to concede numerous fouls which led to the Green Archers having free kicks at dangerous areas. Jed Diamante took responsibility for two dead-ball situations and it unsettled the UE defense on both occasions. UE goalkeeper Lendon Clores, though, prevented further damage from the said free kicks when he performed a routine stop to thwart the first and dealt with Joseph’s shot with ease after the ball was laid off to him by Ybanez.

That La Salle second goal had an expectation of inevitability around it and it finally came good at the 64th minute. Borromeo played a wonderful through ball which unlocked the UE defense. Gelo Diamante then timed his run perfectly to beat the offside trap and finished the move as well as the pass when he directed his shot at the top-right corner.

La Salle had numerous opportunities to add a third goal before the match finished. Clores denied Borromeo twice in succession and only the bottom left post prevented substitute striker Cristian Zubiri from getting a much-needed goal. UE as good as failed to attack in the second half and only a Louie Polinag free kick was their shot on goal when he directed his attempt straight at La Salle goalie Paeng De Guzman.

Eventually, though, the final whistle was sounded off and La Salle were worthy winners of the three points. UE played well at the start, but their sickness this season of sinking as time went by proved to be their undoing once again.

Green Archers head coach Hans-Peter Smit had this to say after the match, “We’ll take one game at a time. There’s still six teams that’s eligible to be in the top four. We just need to maintain the wins kasi we cannot chase anymore FEU’s goal difference. I don’t really care about that because early on first round, everybody knows there’s gonna be a Final Four. There’s no sweep so what we need to do is just to maintain a top four position regardless of what position. It will be good if we end the eliminations with wins so it boosts the confidence.” Finishing, though, was still an issue said Smit.

Next up for La Salle will be archrivals Ateneo de Manila University on Thursday (April 14, 2016; 2:00PM) at the Moro Lorenzo Field in the latter’s campus. Meanwhile, UE will face a floundering University of Santo Tomas on Sunday (April 17, 2016′ 8:00PM) at the McKinley Hill Stadium.