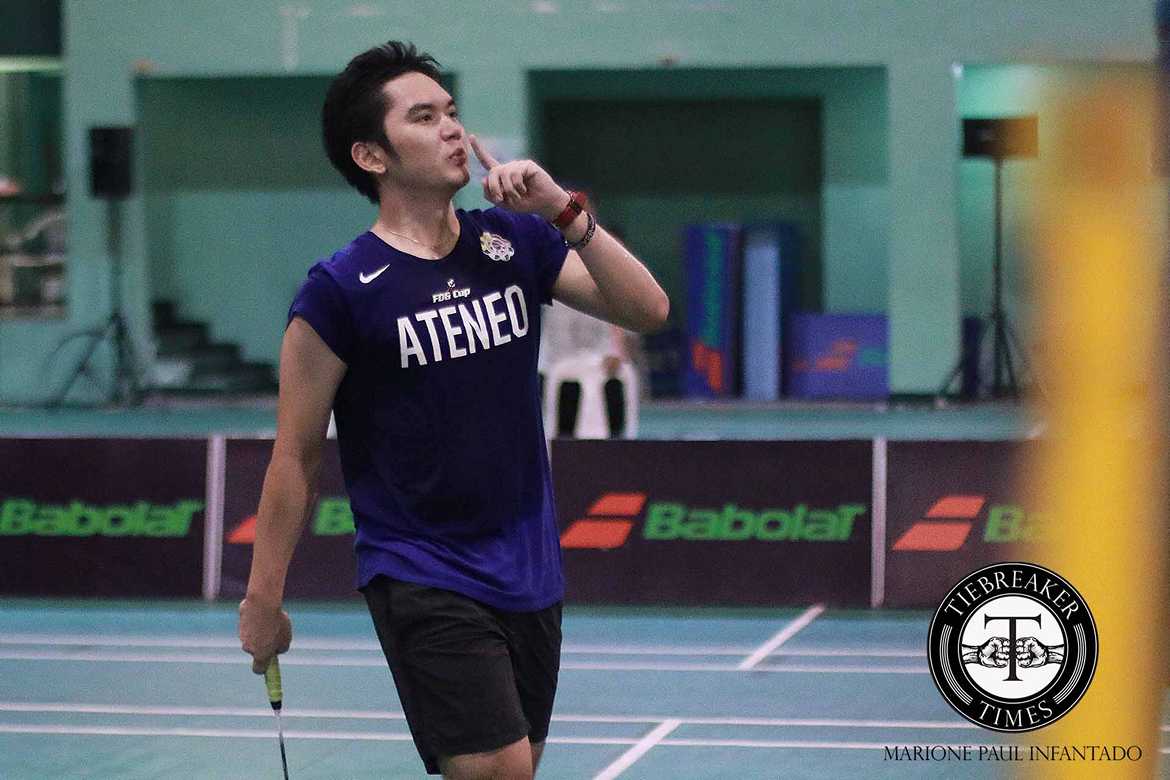 Fourth-seeded Ateneo de Manila University Blue Eagles pulled off a stunning performance to edge the twice-to-beat University of the Philippines Fighting Maroons, 3-1, in the semifinals and forced a winner-take-all tie, Saturday morning at the Rizal Memorial Badminton Hall.

Jan Mangubat continues his stellar year for the Blue and White with a grueling three-game win in the first singles over Miggy Leonardo, 18-21, 21-10, 22-20.

The two power hitter deviated from their usual games as they both mixed it up on offense. The first game was marked by exchanges before the fifth-year Leonardo got three straight to end the game.

Mangubat punished the opponent’s errors in the second to totally dominate the frame. In the third game, Leonardo got the court change with the 11-8 lead, but the Atenean slowly bounced back and took the lead. The senior Maroon got to match point first; nonetheless, excellent courtgeneralship from Mangubat won him the game and the match.

The former Ateneo skipper threatened to put his team to a 2-0 tie advantage as he forced the younger Maroon to crucial errors to get the first game at 21-19.

However, in the second frame, JM Bernardo controlled the match and scored at will. Filart had no answer to the onslaught which ended at 21-13.

Filart bounced back in the third game and was leading the match at 18-9. Nevertheless, just as when the fourth-year Atenean attempted to close out the match, the UP sophomore mounted a comeback. Slowly, the Maroon upstart ate up the deficit and, eventually, took the match at 22-20.

In the first doubles match, Mangubat returned to the court with Hanz Bernardo as they went up against UP’s Vinci Manuel and Betong Pineda. The match was peppered with grueling rallies before the Loyola-based pair took the opening frame at 21-19.

The heat of the action intensified as exchanges of jeers ensued between Hanz Bernardo and a person from the UP crowd.

Nonetheless, after a long lull and more toe-to-toe battles in the court the Blue Eagle sophomores took care of the game and the match at 22-20. Hanz Bernardo and Mangubat took the second match point this time with a strong drive from the latter.

In the second double’s encounter, UP’s JM Bernardo looked to keep his rookie season spotless as he and Jojo Malelang once more mounted a comeback to clinch the first game at 21-19. The Maroons, down 11-15, took out the fight in Ateneo’s Carlo Remo and Patrick Gecosala in the opener, going on an 8-0 run before closing out the game.

From there, Gecosala and Remo took over. Despite some spurts from the Maroons, this time Ateneo would have none of it. The Blue Eagles remained composed and dispatched UP in the next two games, both in 21-15.

For coach Kennevic Asuncio, the Blue Eagles just played better today compared to their very first tie this season against the Maroons.

“Siguro, a little of the luck. Not much of a difference, fighter din naman ever since nung round robin,” he said.

For him, Ateneo played with more excitement and determination this morning.

The former national team stalwart, however, believes that they should play the same way, if not better, tomorrow to repeat against UP. “I think it all boils down to whoever is performing well on that day,” he closed.

The winner-take-all tie between the Blue Eagles and the Fighting Maroons will be played tomorrow, October 9, at 8am at the same venue. The winner will face the defending champions National University Bulldogs in the title series.