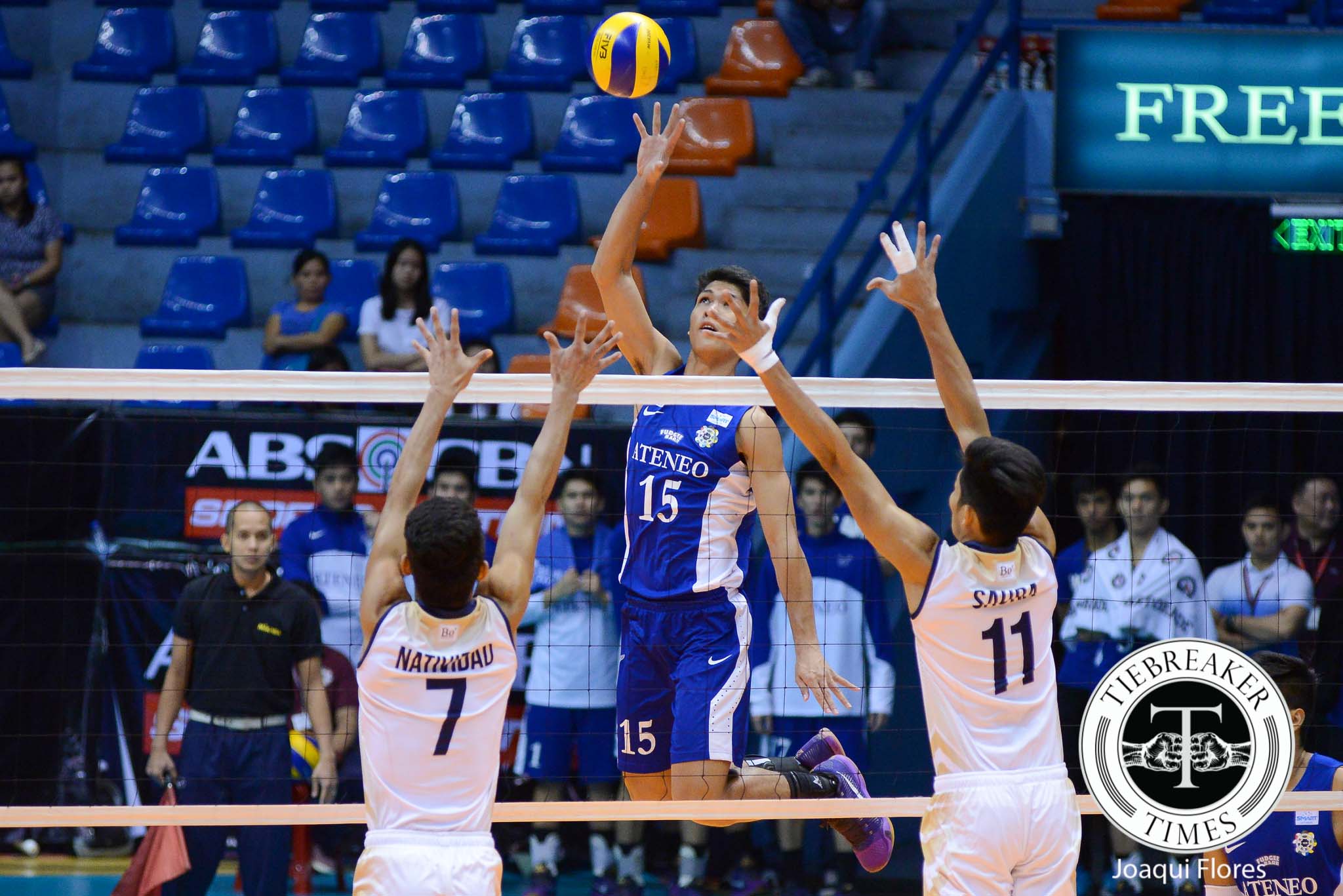 The opening set was a close one as neither was able to seize an advantage over the other, and while Ateneo wasn’t able to convert on many attacks, they were able to keep the set close thanks to NU’s errors. The Bulldogs were able to nab a 20-18 advantage over Ateneo, but were quickly blitzed by a 6-0 Ateneo run putting the Blue Spikers at set point, 24-20. NU battled back as they managed to tie the set at 24 thanks to two kills by Bryan Bagunas and a James Natividad ace. The set continued until Ateneo nabbed set point once again, with Ron Medalla and team captain Ysay Marasigan scoring off the block for a 26-25 lead. The Blue Spikers, however, coughed up consecutive errors before Paulo Ancheta scored a service ace to hand the set to NU.

It was another back-and-forth affair in the second set. Ateneo took a 10-9 lead thanks to a Rex Intal quick attack, but the defending champions were bombarded by four consecutive points by the Bulldogs. Both teams continued battling it out, settling in a tie at 21-all. NU’s team captain, Vince Mangulabnan’s serve sailed past the court, granting Ateneo the lead. Last year’s MVP, Marck Espejo solidified Ateneo’s lead with back-to-back kills. NU threatened to mount another comeback, with Ateneo’s Karl Baysa committing a service error and Natividad scoring on a block, but Espejo would have none of it, scoring once more to tie the set score at 1-1.

Espejo continued his scoring spree in the third set. With NU at a slim 16-15 lead, Espejo mounted a 6-1 run almost all by himself. There would be no NU comeback this time, as Ateneo was prepared for any attacks the NU attempted.

Losing the previous two sets seemed to put the Bulldogs into a funk. Tied at 13, Ateneo went on an 8-1 run, with half of the points coming off of NU’s errors. It wasn’t long until the Blue Spikers sealed the deal, claiming their seventh straight victory.

Espejo led all scorers with 25 points, and while he was the only Blue Spiker with double-digit scoring, Marasigan, Intal, Josh Villanueva, and Baysa provided consistent scoring with 9, 8, 8, and 7 points respectively.

NU, on the other hand, had three players in double digits. Natividad and Bagunas notched 17 points each, while Madz Gampong contributed 16 points.

Ateneo, now holding a 9-1 record, was able to provide some separation from the other teams in the standings. NU, on the other hand, slides to 3rd place with a 6-4 record.

Webb on reacting to critics: ‘I don’t’